Is Gold Smuggling With Mere Profit Motive A 'Terrorist Act' Under UAPA? Supreme Court To Examine 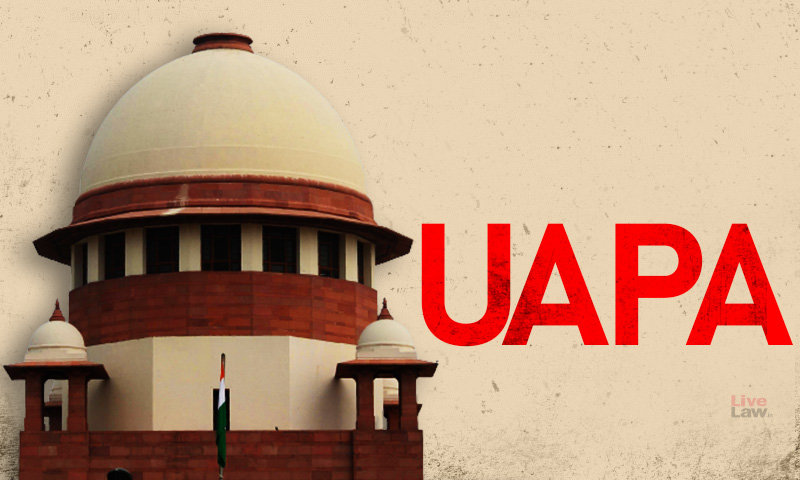 The Supreme Court on Monday decided to examine if gold smuggling falls within the scope of "terrorist activity" under the Unlawful Activities Prevention Act 1967. The Court will examine gold smuggling will be included in definition of the a terrorist economic activity under Section 15(1)(iiia) of UAPA Act 1967.A division Bench of Justice RF Nariman and BR Gavai issued notice in a plea filed...

The Supreme Court on Monday decided to examine if gold smuggling falls within the scope of "terrorist activity" under the Unlawful Activities Prevention Act 1967. The Court will examine gold smuggling will be included in definition of the a terrorist economic activity under Section 15(1)(iiia) of UAPA Act 1967.

A division Bench of Justice RF Nariman and BR Gavai issued notice in a plea filed by one Mohd Aslam against Rajasthan High Court's refusal to quash the FIR and stay the proceedings against him. A FIR was registered against the petitioner under UAPA Act after smuggled gold was seized from him.

The petitioner was represented by Advocates Aditya Jain, Neha Gyamlani, Farooq Ahmed and Bhavya Golecha before the Apex Court.

According to the petitioner, an act done with intention to cause damage to economic security of India alone would attract the offence defined under Section 15 of the UAPA Act and gold smuggling per se even in large quantity should be deal with under Customs Act and not UAPA Act. Further, the legislative intent behind introduction of clause relating to economic security in Section 15 was not to deal with smuggling of gold

Section 15(I)(iiia) of UAPA mentions activities with intent to threaten or likely to threaten the economic security of the country causing "damage to, the monetary stability of India by way of production or smuggling or circulation of high quality counterfeit Indian paper currency, coin or of any other material".

The plea by Mohd Aslam contends that the High Court through its order dated 1st Feb 2021, in complete non consideration of the grounds, dismissed its special leave petition filed for quashing of FIR registered under Section 16 of UAPA and 120B IPC

The petitioner has contended that FIR registered against him under UAPA was registered on arbitrary grounds and no prima facie case of economic terrorism was made against him as alleged, and he was not found to be connected with any terrorist or extremist group.

The petitioner has contended that he smuggled gold in greed of an air ticket and money due to his financial situation during the lockdown and he was in no way found to damage or threaten the economic security of India. The allegation of the FIR stating that smuggled gold could be used for terrorism cannot be used as a chance alone to attract provisions of UAPA and NIA has nothing to show that the gold was to fund terrorism.

The petition has further argued that the FIR is baseless and should be quashed. The smuggling of gold should have been dealt under provisions of the Customs Act and not UAPA Act. The NIA's investigation would in itself become illegal since the Custom Act is not a scheduled act under NIA Act.

The plea has stated that two FIRs have been registered against him on the same sets of facts, which is not permissible, taking into account Supreme Court's judgements where it has been held that 2 FIRs is not permissible for one incident and a second FIR relating to same cause of action and same incident.

The plea has stated that according to the prosecution's story, the petitioner along with 9 others was arrested by officials of Custom Department Jaipur at International Airport Jaipur after seizing more than 18 kgs of smuggled gold bars. According to NIA, facts disclosed by arrested accused revealed commission of criminal conspiracy, furthering terrorist activities and threatening the economic security and damaging monetary stability of India, defining it as a terrorist act in violation of provisions of the UAPA. This was followed by the National Investigation Agency being directed by the Central government to take up the investigation.

The petition has stated that the present petitioner worked as a Labor Contract in Saudi Arabia, but lost his job due to the Covid19 pandemic. The petitioner was influenced by one person to deliver some amount of gold to an unknown person in Jaipur and promised to book him a return ticket to Jaipur along with Rs 10000, to which the petitioner agreed. Subsequently the Custom Department seized the gold on 3rd July 2020, arrested 10 persons including petitioner and sent them to judicial custody. A complaint was filed by the Indian Government against the petitioner under the Customs Act and his statements were recorded accordingly, and he was released on bail in July.

However, a FIR was registered against him in New Delhi under provisions of Unlawful Activities Prevention Act, on ground that smuggling was done to threaten the country's economic stability.

While refusing to quash the petitioner's FIR, Rajasthan High Court on 1st Feb 2021, had observed that the offence of gold smuggling with the intent to threaten or likely to threaten the economic security of the country covered under the definition of 'terrorist act' under Section 15 of the Unlawful Activities Prevention Act, 1967(UAPA). The Court said that such an activity will come under Section 15(I)(iiia) of the Act. The bench also observed that the FIR under UAPA cannot amount to 'double jeopardy' just because there was a pending prosecution under the Customs Act in respect of the alleged gold smuggling activity.

The Kerala High Court had on 18th Feb 2021 held that mere act of gold smuggling, which is covered under the Customs Act, will not amount to a "terrorist act" under the Unlawful Activities Prevention Act unless the same is done with the intention to threaten the economic security of the nation. The Court said that gold smuggling with a mere illegal profit motive will fall within the definition of terrorist act.

"It is clear from the decision that no analysis of the provision was made by the learned single Judge. Moreover, no specific reason has been stated for making the aforementioned observations. It is to be remembered that the learned single Judge was examining whether there was any sufficient reason to quash an FIR at the initial stage of the investigation. We do not find any law laid down in the above decision. We are, therefore, not persuaded by the single line observation made by the learned single Judge that "any other material" occurring in Section 15(1)(a)(iiia) of UA(P) Act is intended to cover gold smuggling also", the Kerala High Court observed, distinguishing the Rajasthan decision.