'Grant Of Citizenship On Basis Of Religion Is Against Grain Of Constitution' : Civil Rights Activists Move SC Against CAA [Read Petition] 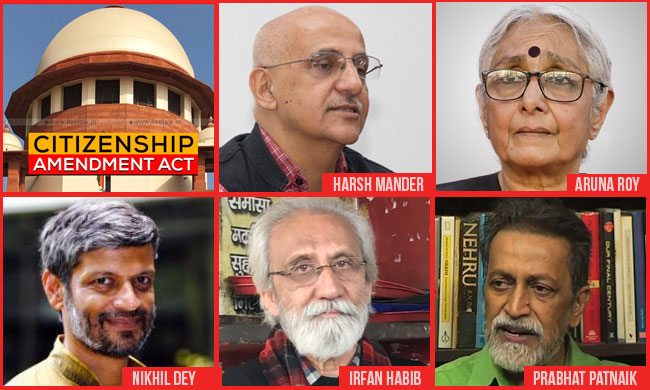 Civil rights activists Harsh Mander, Aruna Roy, Nikhil Dey, Irfaan Habib and Prabhat Patnaik have filed a petition in the Supreme Court challenging the constitutional validity of the controversial Citizenship Amendment Act 2019.The petitioners argue that the Act, which liberalizes and fast-tracks grant of citizenship to non-Muslim migrants from Pakistan, Bangladesh and Afghanistan,...

The petitioners argue that the Act, which liberalizes and fast-tracks grant of citizenship to non-Muslim migrants from Pakistan, Bangladesh and Afghanistan, promotes religion-based discrimination.

"Granting citizenship on the basis of religion goes against the grain of our Constitution. Religious pluralism and secularism have been the foundation of our country since  Independence. While Article 11 empowers parliament to regulate citizenship, this does not mean that Parliament through an ordinary law, can destroy the fundamental values and basic structure of the Constitution", states the petition filed through Advocate Prashant Bhushan.

"The Act also violates Article 21 of the Constitution of India, as it violates the right to live with dignity of individuals who are not covered under the special dispensation of the Amendment Act, solely on the basis of their membership to a particular religion", the petition adds.

The selection of the countries is based on arbitrary classification, the petition states :

"the Act also places residents who have illegally migrated from other countries like Sri Lanka, Nepal, China and Myanmar at a disadvantage by arbitrarily excluding them from the provisions of the Amendment Act.There is no reasonable justification for restricting the benefit under the amendment Act to three countries along to the exclusion of many other neighbouring country that have been war torn and witnessed ethnic cleansing and genocide against persons from various religious and linguistic communities".

The petitioners also challenge the notifications issued by the Central Government under the Passport (Entry into India) Rules and Foreigners Order, whereby exemptions were granted to the specified classes of immigrants who had entered India before December 31, 2014.

A slew of other petitions have also been filed, primarily contending that the exclusion of Muslim migrants from the purview of CAA amounted to violation of secularism, a basic feature of the Constitution, and Article 14.