Gyanvapi Mosque Case : Supreme Court Extends Interim Order For Protection Of Area Where Shivling Is Stated To Be Found Until Further Orders 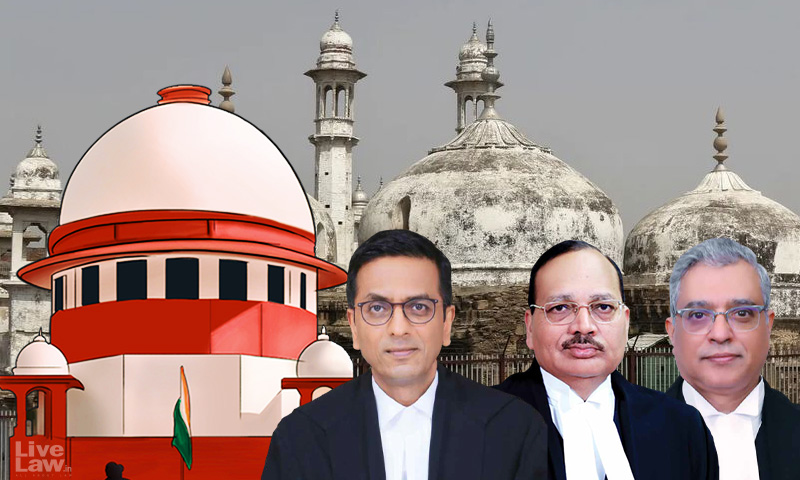 In the Gyanvapi mosque case, the Supreme Court, on Friday, extended the interim order passed on May 17, whereby directions were issued to protect the area where a "Shivling" was reported to have been found inside the mosque during a survey ordered by the Varanasi Civil Court.

In the May 17 order, the Court had clarified that the order for the protection of "shivling" area will not obstruct the rights of Muslims to offer namaz and other religious observances in the mosque.

The bench was considering a special leave petition filed by Anjuman Intezemia Masjid Committee (which manages the Gyanvapi Mosque) challenging the survey ordered by the Varanasi Civil Court in a suit filed by five Hindu women seeking the right to worship the deities in the mosque premises throughout the year.

On May 20, the Court had ordered that the interim order will operate for a period of eight weeks after the decision of the Varanasi District Court on the application filed by the Masjid Committee challenging the maintainability of the Hindu worshippers' suit. On September 12, the District Court dismissed the application of the Masjid side. Since 8 weeks from the date of the said order will expire on November 12, the plaintiffs had yesterday sought the urgent listing of the case for the extension of the interim order. Accordingly, the matter was listed today.

When the matter was taken, Senior Advocate Ranjit Kumar, appearing for the Hindu plaintiffs, submitted that the SLP filed by the Masjid committee has become "infructuous". "The challenge was about the order appointing Advocate Commissioner. My friends(Masjid side) have been participating before the Advocate Commissioner", Kumar submitted. He also requested for the extension of the interim order passed by the Court on May 17.

Senior Advocate Huzefa Ahmadi, appearing for the Masjid Committee, refuted the argument that the petition has become "infructuous". He submitted that the application has been filed by the plaintiffs with incorrect averments that the defendants have been participating in the Commission proceedings.

"I need to get instructions on this. Prime facie to say it is infructuous is not correct because the order appointing Commission was challenged. There is no question of acquiescence. I filed an SLP challenging the order appointing Advocate Commissioner", Ahmadi submitted. The senior lawyer however did not object to the extension of the interim order.

On May 17, the Top Court clarified that the order passed by the Civil Judge Senior Division at Varanasi to protect the spot where a "shivling" was claimed to have been found during the survey of the Gyanvapi mosque will not restrict the right of Muslims to access the mosque to offer namaz and to perform religious observances.

On May 20, the Supreme Court transferred the suit to Varanasi District Court, observing that a senior and experienced judicial officer should deal with the matter considering the sensitivity of the issues involved. The Court directed that the District Court should hear the applications filed by the Masjid Committee under Order 7 Rule 11 CPC questioning the maintainability of the suit on priority.

On July 21, the Court adjourned the matter to October 20, to await the decision of the District Court. Recently, the District Court rejected the Masjid Committee's objection to the maintainability of the suit and held that the same was not barred by the Places of Worship Act 1991.

Two weeks ago, the Varanasi District Court dismissed an application filed by the plaintiffs for carbon-dating and scientific investigation of the "shiv ling". "If Carbon Dating or Ground Penetrating Radar is permitted and if any damage is caused to the 'Shiva Linga' then it would be a violation of the Supreme Court order to protect it and it might also hurt the religious sentiments of the general public," remarked the Varanasi Court.