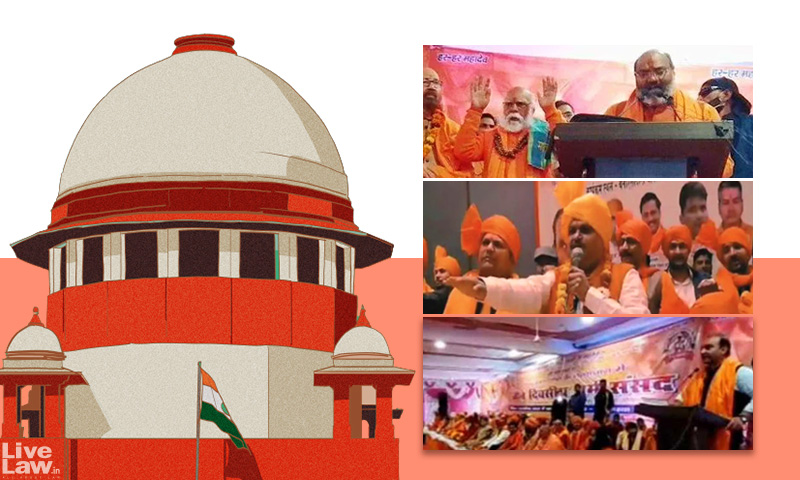 The Supreme Court of India on Wednesday issued notice to the Union Government, the Delhi Police and the State of Uttarakhand in a PIL seeking criminal action with respect to the Dharm Sansad conclave held at Haridwar and Delhi where hate speeches against Muslims were made.A bench comprising the Chief Justice of India NV Ramana, Justice Surya Kant and Justice Hima Kohli issued notice on...

The Supreme Court of India on Wednesday issued notice to the Union Government, the Delhi Police and the State of Uttarakhand in a PIL seeking criminal action with respect to the  Dharm Sansad conclave held at Haridwar and Delhi where hate speeches against Muslims were made.

When the matter was taken up, Senior Advocate Kapil Sibal, appearing for the petitioners, requested the bench to read the transcript of the inflammatory speeches made during the Haridwar conclave.

"I don't want to read it to your lordships, I don't want to sensationalize, but kindly read it", Sibal told the bench. When the bench said that it was issuing notice, Sibal submitted that notice to the Union Government is also needed as it is under an obligation to appoint nodal officers to prevent mob lynching as per the directions issued by the Supreme Court in Tehseen Ponnawalla case.

Sibal also requested an early date saying that similar meetings are announced in other parts of the country as well. Sibal said that a Dharam Sansad was going to be held at Aligarh on January 23 and requested that the matter be posted next Monday. Posting the matter after 10 days, the bench said that the petitioners will be at liberty to give a representation to the local authorities regarding similar meetings proposed in other parts.

"We will permit the petitioners to bring to the attention of concerned authorities about events that are going to take place, which according to them are against the provisions of law and the judgment of this Court", the CJI said.

"If quick steps are not taken these Dharm Sansad will take place at other places. They are going to happen in states where the process of elections is going on. No arrests have happened, the country's atmosphere will be vitiated, its contrary to what this Republic stands for, its ethos & values we cherish. This is a clear incitement to violence", Sibal submitted during the hearing.

The bench asked if similar other matters were being considered by a different bench led by Justice Khanwilkar. Sibal replied that those were petitions seeking general directions against hate speech and this case was specifically dealing with the Dharam Sansad issue. Advocate Shadan Farasat, the instructing counsel, told the bench that Justice Khanwilkar's bench had referred those cases to the bench led by the Chief Justice.

Senior Advocate Indira Jaising sought an intervention on behalf of Tushar Gandhi, great-grandson of Mahatma Gandhi, saying that the Supreme Court had passed directions against mob-violence in his application in 2019.

"Had those directions been implemented, this Dharam Sansad would not have happened", Jaising submitted. The bench said that it is considering only the main petition at the present moment.

The matter was taken up today after urgent listing was sought on 10th January by Senior Advocate Kapil Sibal who had mentioned the matter on behalf of the petitioners.

"We're living in different times where slogans in the country have changed from Satyamev Jayate to Shashtramev Jayate", Mr Sibal had said.

The petitioners have approached the Apex Court seeking its urgent intervention in the matter pertaining to the hate speeches delivered between 17th and 19th December, 2021 in separate two events - one organised in Haridwar by one Yati Narsinghanand and the other in Delhi by 'Hindu Yuva Vahini'.

The Petition drawn by Advocate, Rashmi Singh and filed by, Advocate, Sumita Hazarika, seeks 'independent, credible and impartial investigation' into the incidents of hate speeches against the Muslim community by a SIT. It has been further prayed for the Apex Court to issue directions to the police authorities to comply with the guidelines laid down by it in Tehseen Poonawalla v. Union of India (2018) and to consequently define the contours of 'duty of care in investigation' to be undertaken by the police authorities.

The Petition has been filed against the Ministry of Home Affairs, Commissioner of Police, Delhi and the Direction General of Police, Uttarakhand.

The Petitioners have averred that no effective steps have been taken by the police. The FIRs lodged by the Uttarakhand Police have conveniently excluded offences punishable under Section 120B, 121A and 153B of the Indian Penal Code. Till date no FIR has been lodged by the Delhi Police despite calls for ethnic cleansing at the event organised in Delhi. The Petitioners have further alleged that the inaction on the part of the police only fosters the belief that the authorities are hand in glove with the perpetrators.

It has been argued that the vile speeches would pass the 'spark in a powder keg' test as the Supreme Court had held in Ragarajan v. P. Jagjeevan Ram and Ors. (1989)

"...The anticipated danger should not be remote, conjectural or far fetched. It should have proximate and direct nexus with the expression. The expression of thought should be intrinsically dangerous to the public interest. In other words, the expression should be inseparably locked up with the action contemplated like the equivalent of a "spark in a powder keg"."

It has been further highlighted by the Petitioners that such detestable content being widely available on the internet would have fatal consequences.

Open call for genocide in violation of International Convention

The Petitioners have argued that the concerned speeches emphasising on the ethnic cleansing of Muslims is in violation of the Convention on Prevention and Punishment of the Crime of Genocide to which Indian is a signatory. Article I of the Convention reads as under -

"The Contracting Parties confirm that genocide, whether committed in time of peace or in time of war, is a crime under international law which they undertake to prevent and to punish."

Breach of Duty of Care by police and administrative authorities

The Petitioners have pointed out that the police authorities confuse 'hate speech' with unpopular or dissenting speech in violation of the ratio in Amish Devgan v. Union of India, 2020 , Pravasi Bhalai Sangathan v. Union of India (2014)  and also the Law Commission's 267th Report. They have further emphasized that the guidelines laid down by the Apex Court in Tehseen Poonawalla  are also not followed by the State functionaries

Protection from 'hate speech' is a constitutional and statutory right

Citing Pravasi Bhalai Sangathan v. Union of India (2014) , the Petitioners have submitted that the Apex Court has recognised 'hate speech' as a violation of Articles 14, 15 and 21 of the Constitution. The Petitioners have referred to the Law Commission Report to argue that hate speech is not merely offensive speech, anti-majoritarian speech or dissenting speech, it is an injury which amounts to more than hurting sentiments but less than physical injury which demands restriction in a democratic setup

Between 17th and 19th December, 2021 at two separate events organised in Delhi and Haridwar, hate speeches were made by a group of people calling for genocide of members of the Muslim community. The Petitioners have identified the perpetrators as -

The Uttarakhand Police had filed an FIR on 23.12.20221 under Section 153A and 295A of the IPC against 5 people, namely, Wasim Rizvi, Sant Dharamdas Maharaj, Sadhvi Annapoorna alias Pooja Shakun Pandey, Yati Narsinghanand and Sagar Sindhu Maharaj. With respect to the hate speech given by Suresh Chavhanke, CMD of Sudarshan News and others at the event organised in Delhi, a complaint was filed with the Commissioner of Police, Delhi on 27.12.2021. Subsequently, a video went viral wherein one of the speakers at the Haridwar event flaunted a police officer's allegiance to the organisers. On a video dated 31.12.2021, the organisers had announced their future plans to hold similar events in Aligarh and Kurukshetra in January, 2022. They also circulated the concerned videos of the hate speeches as 'promotional videos'. On 03.01.2022, the Uttarakhand Police lodged an FIR under Section 153A and 298 of the IPC against Wasim Rizvi, Yati Narsinghanand, Sant Dharamdas Maharaj, Sadhvi Annapoorna alias Pooja Shakun Pandey, Sagar Sindhu Maharaj, Swami Anand Swaroop, Ashwani Upadhyay, Swami Prabodhanand Giri, Dharamdas Maharaj, Premanand Maharaj amongst others.

Obhan & Associates Act On Okinawa Autotech's Joint Venture With Tacita
Latest News
+ More
1Allahabad High Court Weekly Roundup: May 16 2022 to May 22, 2022
2'Continuing Unlawful Activity' For Gaining Advantages Other Than Economic Or Pecuniary Is Also An "Organised Crime" Under MCOCA: Supreme Court
3"Majority Of Parents Blame Daughter In Law If Their Son Dies Untimely": Allahabad HC Orders Compassionate Appointment For Widow
4'Condemned In Strongest Words' : SCAORA Objects To SCBA President's Demand To Scrap AoR Exam For Advocates With 10 Yrs Practice
5FIR Under 'UP Gangsters Act' Can Be Lodged On The Basis Of A Single Case: Allahabad High Court
6Delay In Filing Appeal Based On COVID-19 Reasons: ITAT Imposes Penalty Of Rs.25,000
7Karnataka High Court Weekly Round-Up: May 16 To May 22, 2022
8Not Pressing Criminal Appeal By Accused After Conviction By Lower Court Is Like Confession Of Offence: Allahabad High Court
लाइव लॉ हिंदी
+ More
International
+ More
1Abortion Laws In The US And Other Countries
2Leaked Draft Judgment Of US Supreme Court Indicates Overruling Of Roe v.Wade Abortion Rights Decision
3The Indian Connection With Pak Decision To Live-Stream Court Proceedings
4Russian Suspension At The Human Rights Council: Band-Aid On A Bullet Wound?
Environment
+ More