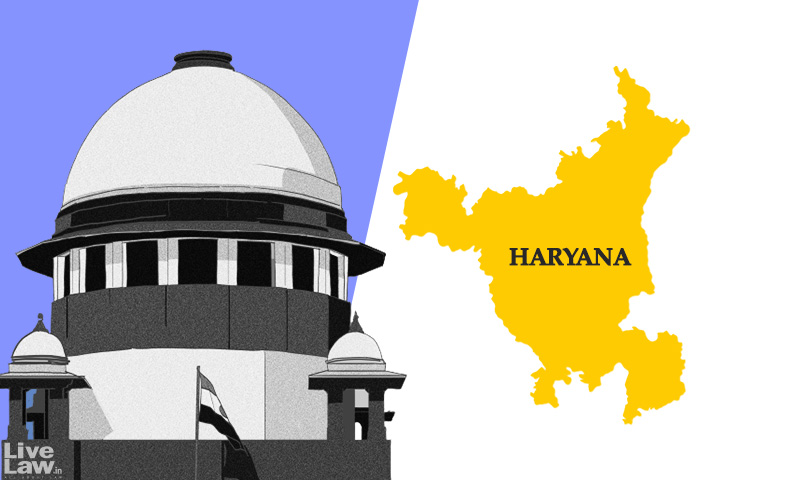 The Supreme Court on Thursday day set aside the interim order of the Punjab and Haryana High Court which stayed the operation of the Haryana law(The Haryana State Employment of Local Candidates Act 2020) which provided 75% reservation for local people in private sector jobs having a monthly salary of less than Rs 30,000.Noting that the High Court has not recorded any reasons for its stay...

The Supreme Court on Thursday day set aside the interim order of the Punjab and Haryana High Court which stayed the operation of the Haryana law(The Haryana State Employment of Local Candidates Act 2020) which provided 75% reservation for local people in private sector jobs having a monthly salary of less than Rs 30,000.

In the above terms, a bench comprising Justice L Nageswara Rao and PS Narasimha disposed of the special leave petition filed by the State of Haryana against the High Court's order.
"...we do not intend to deal with the merits of the matter as we propose to request the High Court to decide the writ petitions as expeditiously as possible, at any rate within 4 weeks.  The parties are directed to seek no adjournments and present before the court next week for fixing the schedule of the hearing.

In the meanwhile, the State of Haryana is directed not to take any coercive steps against the employers. The impugned order dated 03.02.2022 is set aside as the HC has not given sufficient reasons for staying", the bench dictated in the open court.

Solicitor General of India Tushar Mehta, appearing for the State of Haryana, submitted that the High Court's order should be interfered on the grounds that it has not recorded any reasons and it has stayed the ongoing implementation of a statute, ignoring the presumption of constitutionality of a legislation.

"There is a presumption of legality of statute. There should be some patent illegality for staying it. The Court can't stay legislation with a single line order", the bench orally observed.

Senior Advocate Dushyant Dave, appearing for the employers association, raised objections to the setting aside of the High Court's order. He submitted that the legislature has no constitutional power to enact a law providing reservation for domiciles as such a law will be void for violating Article of the Constitution.

"If there are prima facie substantial questions of law, then interim order must follow. The livelihood of employees are at stake. Also, the very existence of employers are also affected. If I need a fitter, can I be asked to wait till I find a fitter from Haryana.  Even a law firm in Gurgaon will be affected. They need to find juniors from Haryana", Dave urged.

Dave highlighted that as per settled precedents, there has to be some empirical study showing backwardness of a particular class before providing them reservation. Such a study is totally absent in this case.

Senior Advocate Shyam Divan, appearing for another employers association, submitted that the law has a profound impact on the functioning of industries. Saying that the
"law is very drastic", he pleaded that the interim order be not vacated. He suggested that the best course will be to treat it as an ad-interim order and allow the State to raise its objections to it. At least there should be an order protecting the employers from coercive steps under the Act in the meanwhile.

The bench said that the petitioners might have a good case on merits but it was concerned with the manner in which the interim order was passed by the High Court.

"Courts are reluctant to pass interim orders staying legislations. Stay of legislation can only be when the Court is of the opinion that it is manifestly unjust or glaringly unconstitutional. No reasons are given by the High Court in support of the impugned order by which a legislation is stayed. Therefore, the impugned order is set aside", SC said in the order.

The stay on the law came from the High Court Bench of Justice Ajay Tewari and Justice Pankaj Jain on a Writ petition challenging the vires of the Haryana State Employment of Local Candidates Act 2020.

The plea had been moved last month by the Faridabad Industries Association (FIA) before the Punjab and Haryana High Court. Admitting the plea, the Court also issued a notice to the state government
It may be noted that the Haryana State Employment of Local Candidates Act 2020, which was notified on November 6, 2021, seeks to provide 75 percent reservation for local candidates in private sector jobs that offer a salary of less than Rs 30,000 a month. The Act is scheduled to come into effect on January 15, 2022.

Haryana State Employment of Local Candidates Act, 2020 - Constitutional Validity - Interim order passed by Punjab & Haryana High Court staying the implementation of the Act set aside - Stay of legislation can only be when the Court is of the opinion that it is manifestly unjust or glaringly unconstitutional - Sufficient reasons should be given for staying legislations.