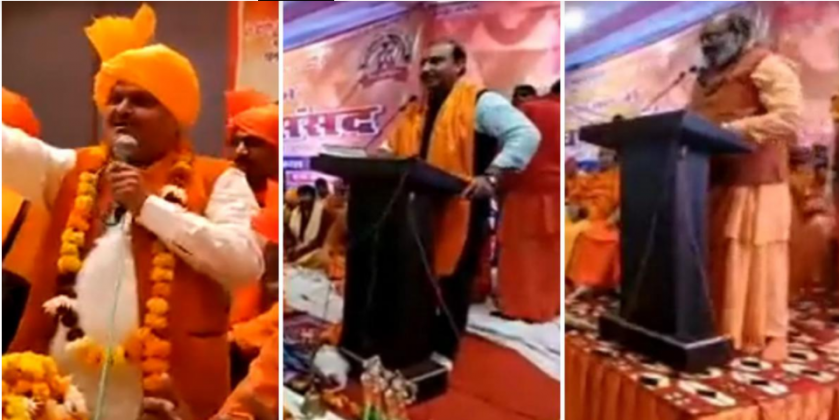 A writ petition has been filed in the Supreme Court seeking action against the repeated instances of hate speech across the country against Muslims. Jamiat Ulama-i-Hind, a socio-religious organization of Muslims and Maulana Syed Mahmood Asad Madani, a religious scholar and social activist, are the petitioners.The petition narrates various instances of derogatory remarks made against...

A writ petition has been filed in the Supreme Court seeking action against the repeated instances of hate speech across the country against Muslims. Jamiat Ulama-i-Hind, a socio-religious organization of Muslims and Maulana Syed Mahmood Asad Madani, a religious scholar and social activist, are the petitioners.

The petition narrates various instances of derogatory remarks made against Prophet Mohammad and calls for violence made against the Muslim community by several persons across the country ranging from 2018. The petitioners contend that no action under criminal law has been initiated with respect to any such instance.

The petition cites inflammatory speeches made by Yati Narasinghanand Saraswati, priest of Dasna temple, the anti-Muslim slogans made at the Jantar Mantar rally in August this year, the campaign and protests against Friday 'namaz' in Gurugram where protesters disrupted congregations at designated plots by spreading cow dung and issuing threatening slogans, rallies held in Tripura in which derogatory slogans were made against the Prophet, speeches made by Suraj Pal Amu and Santhosh Thammaiah etc.

The petitioners also cite a report of Uttar Pradesh police arresting over 100 Muslims for holding a protest against the remarks of Yati Narasinghanand Saraswati. It may be noted that recently,  76 Supreme Court lawyers wrote a letter to the Chief Justice of India seeking suo motu action against the Haridwar conclave where genocidal calls were made against Muslims.

Saying that the police authorities did not take any action against the instances of anti-Muslim hate speeches, the petitioners voice concerns about law enforcement agencies "succumbing to non-state actors" and failing to protect the rights of the minorities.

"The above facts simply go on to demonstrate that through provocative and derogatory speeches of Indian citizenry, a religious community is attacked in order to compel them to abandon their religious practices. It is not a matter to be left to the administrative process in the country without holding them accountable. A considered judicial intervention of the Constitutional Court, by invoking under public law remedy, is required considering the present circumstances"

The petitioners highlight that derogatory remarks and abusive speeches against Muslims have resulted in violence and even the killing of individuals. It is argued that the police authorities have failed to discharge their "duty to care" by failing to act against the anti-Muslim hate speeches.

"..hate speech feeds into a system of political and social discrimination and has a cumulative effect on the dignity of a group/community and its members", the petition filed through Advocate MR Shamshad states.

The petition drawn and filed by Advocate MR Shamshad places reliance on the judgment of the Supreme Court in Tehseen Poonawalla vs Union of India, where the Supreme Court passed elaborate directions to deal with mob crimes and lynching. The petition also refers to the decision in Lalitakumari case, which held that police have the mandatory duty to register FIR when a cognizable offence is revealed.

It is said that in some cases, after public pressure, police registered FIR but against "unknown persons" though the identities of the persons making hate speeches were in public domain through numerous images and videos shared in social media.

The petition raises the following issues :

(i) Whether the direction emanating from the principle of "duty to care" as set-out in Para 40 in the case of Tehseen Poonawalla vs. Union of India (2018) 9 SCC 501 would not apply in holding the Police/State accountable for hate speeches?

(ii). Whether the direction in Tehseen Poonawalla Case (supra) is insufficient to deal with the case of derogatory remarks, in the nature of blasphemy, if applied in the present cases? If yes, then that are the further guidelines which are required to be passed by this Hon'ble Court?

(iii). Whether the Preamble and the scheme of the of the Constitution of India 1950, permit that the system is not held accountable for through punitive measures when on the face of it there is concerted effort to target a huge number of minority population in the country on the basis of their religious identity?

The petitioners seek the following reliefs :

(i). Seek a report from the Union of India in relation to action taken by different state mechanisms in relation to the hate speeches, particularly targeting the personality of Prophet Mohammad, in the light of the mandatory directions passed in Tehseen Poonawalla case.

(ii). Constitute an independent committee for compiling all complaints relating to hate crimes in the country.

(iii). Directions for court-monitored investigation and prosecution in hate crimes.