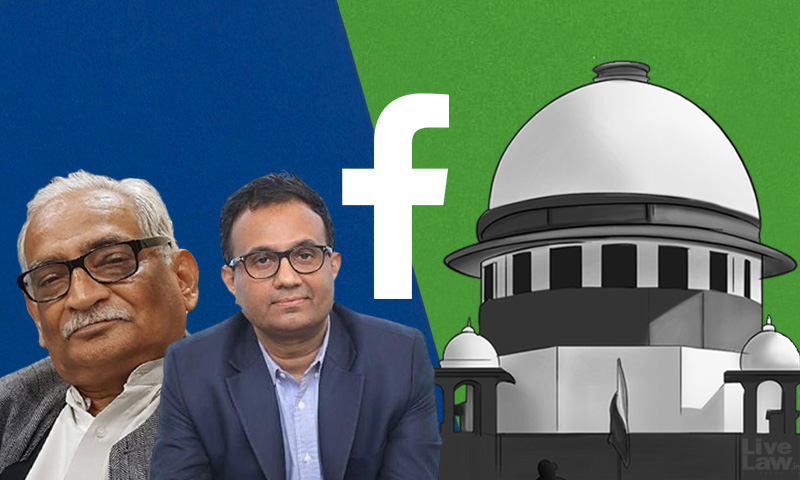 Concluding the submissions on behalf of Committee on Peace and Harmony of Delhi Assembly in the Supreme Court today, Senior Advocate Rajeev Dhavan submitted that dissemination of hate speech and disinformation being spread on Facebook is a global concern.The statement came while Dr. Dhavan was arguing on the aspect of numerous complaints received by the Committee which required...

Concluding the submissions on behalf of Committee on Peace and Harmony of Delhi Assembly in the Supreme Court today, Senior Advocate Rajeev Dhavan submitted that dissemination of hate speech and disinformation being spread on Facebook is a global concern.

The statement came while Dr. Dhavan was arguing on the aspect of numerous complaints received by the Committee which required "urgent consideration" including oral evidences of witnesses suggesting that Facebook is a platform wherein hate speech and communal hatred was being spread.

A Supreme Court bench comprising Justice S.K. Kaul, Justice Hrishikesh Roy and Justice Dinesh Maheshwari was hearing the challenge made by Facebook India Vice President Ajit Mohan to the summons issued by the Delhi Assembly panel to enquire into the role of social media behind Delhi riots.

A similar submission was made by Dr. Dhavan yesterday wherein he argued that a total of 2210 complaints from social media were received by the Committee.

Backing up his submission, Dr. Dhavan relied on the 2019 report of the House of Commons's "Standing Committee on Access to Information, Privacy and Ethics".

"House of Commons assembled a large Parliament consisting of various countries. In this summary report, 9 Parliaments got together to express concern about disinformation. This is a global concern, your lordships."

In the later part of the proceeding, Justice Kaul, while responding to the House of Common's report remarked "Social Media Platforms have wide ramifications. The report of 2019 you showed to us is also very germane to a problem persisting on an international plane."

Dr. Dhavan's submissions before the Apex Court today focussed on two other essential aspects. First, he stressed upon the argument that the Committee derives its independent power from the power of enquiries which requires a wider interpretation and Second, the concept of cooperative federalism forms an integral part of constitutional principles.

Arguing on the importance of enquiries, Dr. Dhavan submitted:

"Harmonious construction is within entries and across entries. The subject of enquiries is found in List 1 Entry 94 and List 2 Entry 45. My legislative power comes from enquiry. But these enquiries need to be given a wider interpretation as a source of power."

However, at this juncture, Justice Kaul clarified to Dr. Dhavan that the interpretation of these enquiries have to be subject matters qua subject entries and enquiries cannot deal with police, public order or land issues which are otherwise excluded from the executive power of GNCTD.

Furthermore, Dr. Dhavan went ahead to argue that the issue of peace and harmony has a wider interpretation, carrying a duty across the board which flows from the directive principles of state policy.

"The core function of the Committee is that they do continuous contact with people. And how they do that? Through committees. Otherwise parliament will become dictatorship." Dr. Dhavan submitted at the outset.

Dr. Dhavan also argued that the Government of NCT of Delhi was a "creation of constituent power" which makes it at par with other State Assemblies.

"Let us not think of it as an inferior Assembly. It is created by power. There is of course the GNCTD Act. Similar provisions exist under this Act. The Legislative Assembly is identical. The removal is there, LG's power to address is there. All this is pari materia to a State Assembly." Dr. Dhavan submitted.

Concluding his submissions, Dr. Dhavan touched upon the issue of cooperative federalism which was aggressively denied by Mr. Salve in the earlier proceedings.

"Cooperative federalism is not a power but a part of constitutional principles. No wide is claim is made in this case. The only reason of mentioning cooperative federalism was that suppose there is something not within the domain of list 3, then we recommend something to you. It's a routine recommendatory power. And this clearly ends my submissions." Dhavan concluded.

The matter will now be heard on 17th February 2021. SGI, Tushar Mehta followed by Mr. Salve and Mr. Arvind Datar will be putting forward their counter arguments followed by which the hearing shall be concluded.