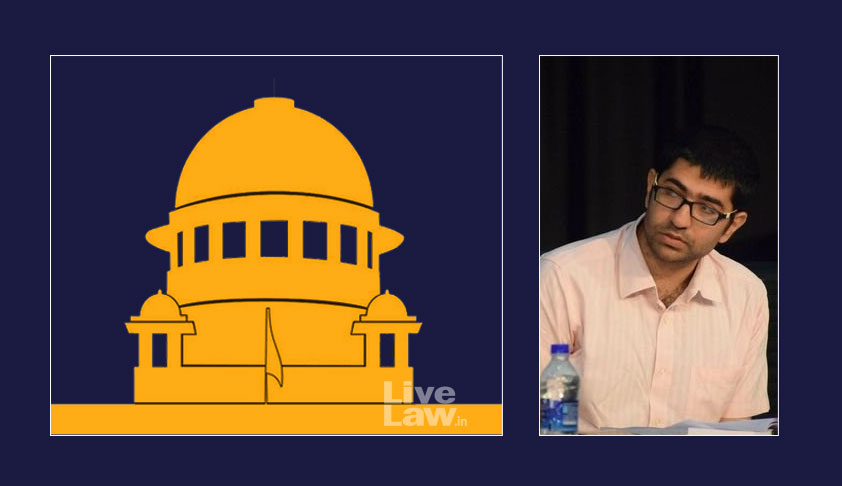 Arguing for adopting different parameters with respect to prior restraint on hate speech as opposed to normal free speech, Gautam Bhatia, lawyer and constitutional law scholar, made crucial submissions in the Supreme Court on Tuesday in the case against Sudarshan News TV.

"Hate speech undermines the idea of a free marketplace of ideas. The targeted community is deprived of the opportunity to respond or defend", Bhatia submitted before a bench comprising Justices D Y Chandrachud, K M Joseph and Indu Malhotra.

In the instant case, a community is being vilified to the extent that they are not able to respond, he added.

"The consideration on prior restraint is different in a case of hate speech", he said.

While the Courts ought to be generally guarded against imposing prior restraint on free speech, Bhatia explained, different considerations ought to apply when it comes to hate speech.

Because, hate speech creates a hostile environment exposing the members of the targeted community to discrimination, persecution and violence, and this undermines the constitutional values of equality and fraternity, he submitted.

He told the bench that an order restraining the telecast of the remaining episodes of the controversial show of Sudarshan TV will be a "reasonable response" given the hateful content of the program.

He was appearing for a group of retired civil servants, who intervened in the petition seeking ban on the anti-Muslim show by the channel.

In the application drawn by Bhatia, a distinction is made between "offensive speech" and "hate speech".

"Offensive speech is simply speech that causes subjective feelings of offence or outrage and nothing more. Such speech may be ill-considered, unwise and improper but it is not illegal. Hate speech goes beyond subjective feelings of offence and objectively has the effect of undermining constitutional values of equality, sending a message that a person or a group of people are not worthy of equal concern of respect and are not equal members of society, or are fair game for discrimination, hostility or violence", the application stated.

Advocate Shadan Farasat, appearing for a group of students from Jamia Milia Islamia who have intervened in the case, also made similar submissions.

Hate speech is different from discussing different views, he said.

"Hate speech is something which affects the dignity of the individual per se. It demeans a person. How does a person respond to it with ideas?", he submitted.

[Breaking] "You Cannot Target One Community And Brand Them In A Particular Manner": SC Restrains Sudarshan TV From Telecasting "UPSC Jihad" Show

During the hearing, there were some interesting moments when Solicitor General, Tushar Mehta, cited the Gautam Bhatia's name.

The Solicitor General, to highlight the difficulties in controlling speeches and opinions expressed through different platforms, said :

"For example, Gautam Bhatia writes something to which I don't agree. I want to settle scores and I come out with a nasty piece. He chooses not to respond. Then how can your lordship regulate?", the SG said.

The SG clarified that he was just using the name of Gautam Bhatia as an example.

In response, Justice Chandrachud said that he reads Bhatia's blogs.

With a smile, Justice Chandrachud said that all the articles in his blog carry a "statutory warning" above them, referring to the critical note put in his blog entries about the manner in which the Court dealt with the sexual harassment allegations against the former Chief Justice of India, Ranjan Gogoi.

Justice Chandrachud also said that an academic blog was different from an electronic media operating with the intention of reaping profits.

"To equate the blog which Mr. Bhatia runs on an intellectual level with an electronic media for profit-making is like comparing chalk and cheese", the judge said.

After the hearing, the bench passed an order restraining Sudarshan News TV from telecasting the remaining episodes of 'Bindas Bol' show until further orders, after making a prima facie observation that the object and the purpose of the show was to vilify Muslims.