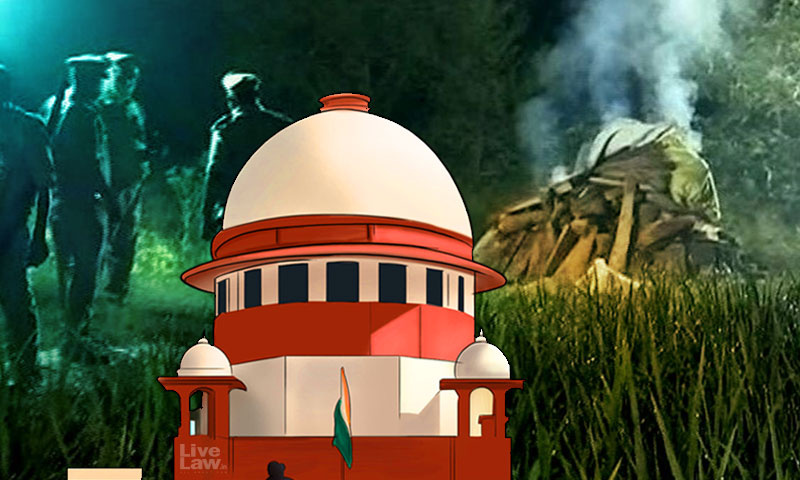 The Supreme Court on Thursday reserved orders in the plea seeking Court Monitored CBI/SIT investigation into the Hathras case.Solicitor General Tushar Mehta informed a bench of Chief Justice SA Bobde, AS Bopanna & V. Ramasubramaniun that affidavits had been filed on behalf of the State stipulating the Witness protection plan as well as choice of legal representation by the Victims' family...

The Supreme Court on Thursday reserved orders in the plea seeking Court Monitored CBI/SIT investigation into the Hathras case.

Solicitor General Tushar Mehta informed a bench of Chief Justice SA Bobde, AS Bopanna & V. Ramasubramaniun that affidavits had been filed on behalf of the State stipulating the Witness protection plan as well as choice of legal representation by the Victims' family in terms of an earlier order of Top Court.

"There are two affidavits filed by state one regarding the protection given to witnesses and family of the victim. The other one is regarding the choice of lawyer for the victim. There are CCTV cameras deployed outside the home of the Victim. The victims family had informed the Police that Adv Seema Kushwaha has been engaged by them and that they would also like a lawyer from the Government," said the SG.

Next, the SG informed the court that the publication of the name of victim is prohibited in the CRPC and the same has been revealed in the Allahabad HC orders.

To this, the CJI said that they can delete it suo motu.

Advocate Seema Kushwaha appeared today for the victims family and urged the court to transfer the trial of the proceedings after investigation to Delhi.

Senior Advocate Sidharth Luthra who intervened on behalf of one of the accused sought to make submissions.

Senior Advocate Indira Jaising, at this juncture, interjected and said that Luthra should not be allowed to be heard as he is for the accused.

"This is between us and the court, how can the accused be heard during pendency of investigation?"

Then, she submitted that a fair trial is not expected in the state of UP. "Investigation has been botched up completely and the FIR does not even have a number," she added.

"We want intensive monitoring of the case by a constitutional court. We want a special PP to be appointed. We are not satisfied by witness protection granted by the UP Govt but want it by the CRPF. The victims have grievance against the State. There the victim died, here the victim has already died. We don't know how many more people in the family are safe. It is critical for the trial to be transferred out of Uttar Pradesh"

Senior Advocate Harish Salve appearing for the Director General of Police (UP) said that he had no problem with the witnesses being protected by the CRPF but said that if the court ultimately does so, it must clarify that the same does not reflect on the Uttar Pradesh Police.

Luthra went on to submit that investigation details should not be dispensed with by the victims' family as this would lead to interference in a fair trial for the accused. The CJI asked him to approach the Allahabad High Court with this grievance. "We are not entertaining this," he said.

In this backdrop, the court concluded hearing in the case and reserved its verdict.

The bench had earlier directed the State of Uttar Pradesh to file an affidavit stipulating Witness Protection Plan for the family and witnesses of the 19-year old woman who was allegedly gang-raped by four upper-caste men in Hathras District, Uttar Pradesh.

The CJI led bench had also asked the Solicitor General, appearing for the State of UP to find out whether the victims family had chosen a lawyer for representation.

SG: I appear for the State of UP. I am not opposing the petition. There are narratives and narratives in public domain. Let us not sensationalise the death of a young girl. Investigation just be fair and impartial. All kinds of people, political parties giving one narrative or another. Your lordships must supervise the investigation and the purpose of it must not be lost.

Senior Advocate Indira Jaising appearing for one of the intervenors urged the Court to provide witness protection to the family of the girl in terms of the stipulated provisions of the SC-ST Act.

Further, Jaising request for an SIT appointed by the Court. "Family has expressed that they are not satisfied with the CBI to take up the case," she added.

At this juncture, CJI SA Bobde asked Jaising what her locus was in the present case which was a criminal case.

"We are hearing your because this a shocking incident, but we are still pondering over your locus in this case," said the CJI.

While SG informed the Court that the Family of the victim had already been provided adequate police protection, the CJI insisted that the same be brought on record before the Top Court.