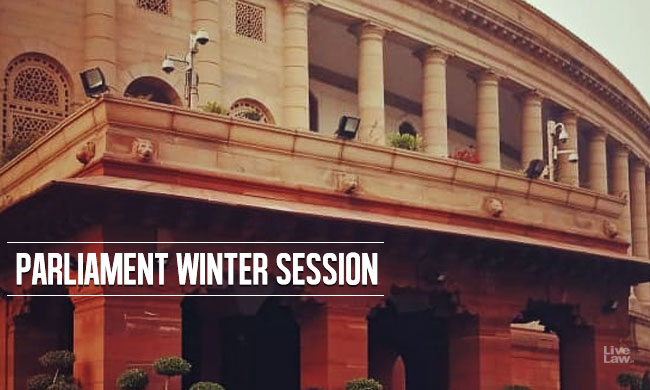 The Winter Session of the Parliament, which began on November 18, concluded on December 13 as both the houses adjourned sine die. During the Session, Lok Sabha worked for 111% of the scheduled hours while the Rajya Sabha worked for 92%.

The highlights of key legislative actions during the Winter Session are given below:

The contentious Citizenship (Amendment) Bill 2019, which seeks to amend the Citizenship Act 1955, was passed by the Lok Sabha on December 9 and by the Rajya Sabha on the next day.

The Bill seeks to relax conditions for acquiring citizenship for non-Muslim migrants from Pakistan, Bangladesh and Afghanistan. It provides that Hindus, Sikhs, Buddhists, Parsis, Jains and Christians who migrated to India without travel documents from Pakistan, Bangladesh and Afghanistan on or before December 31, 2014 will not be regarded as illegal migrants, if they establish their residency in India for five years instead of existing eleven years.

A critical comment on the bill may be read here.

This Bill proposes to merge the Union Territory of Dadra and Nagar Haveli, which presently has only one district with the UT of Daman and Diu, which has two districts, to ease administration and save State exchequer.

The merged UT will be named as the "Union territory of Dadra and Nagar Haveli and Daman and Diu". Further, when the Bill comes into force, the assets and liabilities of both the UTs will stand merged and will belong to the new territory. Further, it will be allocated two seats in the Lok Sabha. Furthermore, jurisdiction of the High Court of Bombay will continue to extend to the proposed UT.

It was cleared by the by the Lok Sabha on November 27 and by the Rajya Sabha on December 3. Read the detailed provisions of the Bill and the Statement of Objects here.

The Bill proposes to amend the Arms Act, 1959 to criminalize and punish acts of "tracking arms and their components from manufacturers to end users", "organised crime", "negligent use of firearm", etc. It also lowers down the number of valid arms licenses that can be held by an individual at a time from three to one.

Click here to read more on the penalties entailed in the Bill.

This Bill is aimed at protecting the rights of transgender persons by granting them recognition and making welfare provisions for them.

It prohibits discrimination against a transgender person, including denial of service or unfair treatment in relation to: (i) education; (ii) employment; (iii) healthcare; (iv) access to, or enjoyment of goods, facilities, opportunities available to the public; (v) right to movement; (vi) right to reside, rent, or otherwise occupy property; (vii) opportunity to hold public or private office; and (viii) access to a government or private establishment in whose care or custody a transgender person is.

It further criminalizes denial of use of public places to transgenders, removal of transgenders from household and village, etc.

The Bill was cleared by the Lok Sabha on August 5, during its monsoon session, and by the Rajya Sabha on November 26. To read detailed provisions of the Bill, including provisions relating to grant of Transgender Certificate, penalties for discrimination, etc., click here.

It stipulates that SPG will provide security to the PM and members of his immediate family 'residing with him at his official residence' only. It also prescribes SPG security to any former PMs and his immediate family members residing with him at the residence allotted to him, for a period of five years from the date on which he ceases to hold the office.

It was cleared by the Lok Sabha on November 27 and by the Rajya Sabha on December 3. Click here to read detailed provisions of the Bill.

The Prohibition Of Electronic Cigarettes (Production, Manufacture, Import, Export, Transport, Sale, Distribution, Storage And Advertisement) Bill, 2019 was passed by the Lok Sabha on November 27 and by the Rajya Sabha on December 2. It will replace the ordinance promulgated by the Centre in that behalf on 18 September.

It further punishes storage of e-cigarettes with imprisonment up to six months or a fine of up to Rs 50,000, or both. Once the Bill comes into force, the owners of existing stocks of e-cigarettes will have to declare and deposit these stocks at the nearest office of an authorized officer.

7. Bill To Grant Ownership Rights To People Living In Unauthorised Colonies In Delhi

The NCT of Delhi (Recognition of Property Rights of Residents in Unauthorised Colonies) Bill, 2019 was passed by the Lok Sabha on November 28 and by the Rajya Sabha on December 4.

It seeks to provide a framework to recognize the property rights of persons living in unauthorized colonies in Delhi; by granting rights of ownership or transfer or mortgage on the basis of Power of Attorney, Agreement to Sale, Will, possession letter or any other document evidencing payment of consideration.

This Bill aims to facilitate the orderly growth of the chit fund sector and enable greater financial access to people by amending the Chit Funds Act, 1982. It was passed by the Lok Sabha on November 20 and by the Rajya Sabha on November 28.

The Bill recognizes chit funds under various names, including kuri, fraternity fund, rotating savings, credit institution, etc. It proposes to increase the maximum amount of chit funds which may be collected by (i) Individuals: from Rs. 1 lakh to Rs. 3 lakh; and by (ii) Firms: from Rs. 6 lakh to Rs. 18 lakh.

To read further amendments and other salient features of the Bill, click here.

The Bill was first introduced during the Monsoon session of Parliament in the Rajya Sabha and was passed on August 6. The Lok Sabha cleared the Bill in this session on November 26.

This Bill was cleared by the Lok Sabha on August 5 during the Monsoon Session however the Rajya Sabha referred the Bill to the Select Committee for further deliberation in this session, on November 21.

In its present shape, the Bill allows altruistic surrogacy, a selfless arrangement where only medical expenses and insurance cover are provided to the surrogate mother, and there's no room for any other monetary reward. The bill also, by virtue of Section 4, allows surrogacy in cases of proven infertility. The provision also prohibits surrogacy for producing children for sale, prostitution or other forms of exploitation.

It prescribes five years waiting period prescribed for a couple to avail surrogacy measures and allows only close relatives of a person to be a surrogate mother.

Click here to read other salient features of the Bill, including provisions relating to eligibility to undertake surrogacy, eligibility of surrogate mother, protection of surrogate child, offences and penalties, etc.

The Bill will replace the ordinance promulgated by the Central govt. in this regard on September 20, with certain variations.

This Bill was passed by the Lok Sabha on December 3 and by the Rajya Sabha on December 9, to restrict the use of hazardous material on ships and to regulate the recycling of ships by establishing a National Authority.

The Bill is an outcome of the Hong Kong International Convention for the Safe and Environmentally Sound Recycling of Ships, 2009, to which India is a signatory. It will apply to: (i) any new or existing ship which is registered in India, (ii) ships entering a port or terminal in India, or the territorial waters of India, (iii) any warship, or other ship owned and operated by an administration and used on government non-commercial service, and (iv) ship recycling facilities operating in India.

To read salient features of the Bill, click here.