'Right To Wear Hijab Is A Cultural Right Protected Under Article 29, Issue Requires Consideration Of A Larger Bench': Kapil Sibal To Supreme Court 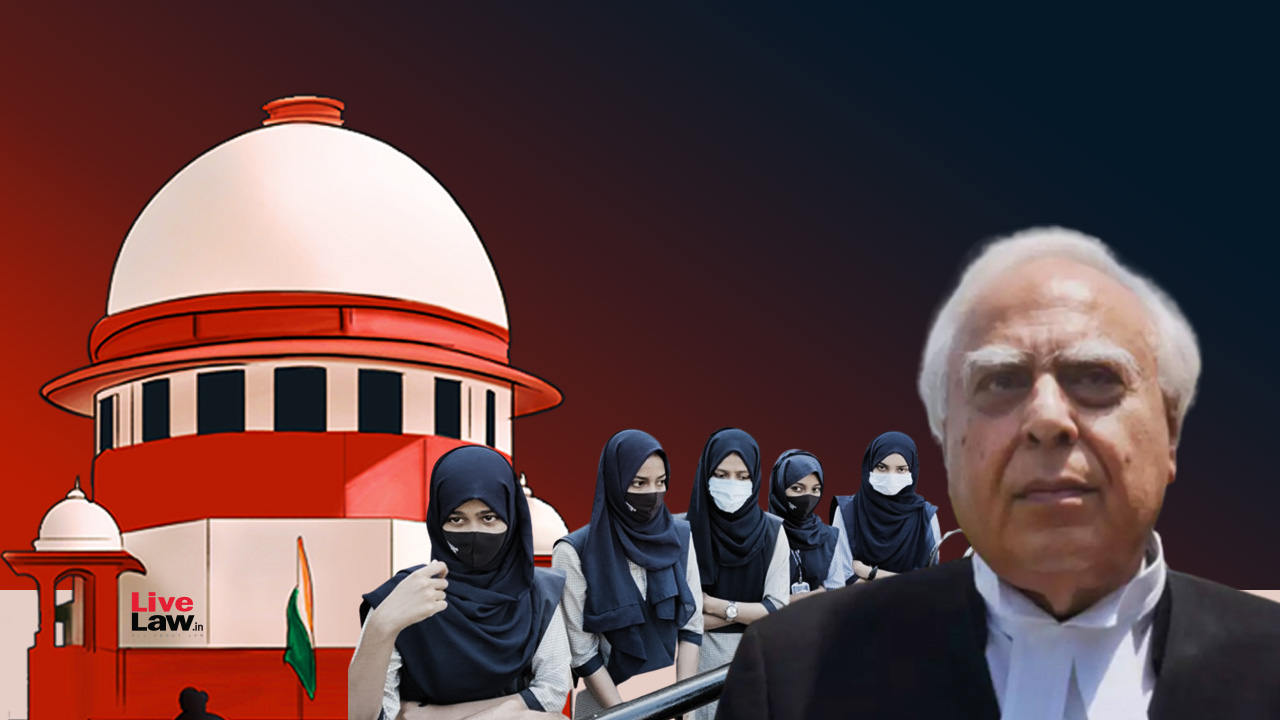 The Supreme Court today continued hearing the petitions challenging the Karnataka High Court's judgment which upheld the ban on wearing hijab by Muslim students in educational institutions.Senior Advocate Kapil Sibal urged the division bench comprising Justices Hemant Gupta and Sudhanshu Dhulia to refer the matter to the Constitution Bench. He submitted that the issue involved in this case...

Senior Advocate Kapil Sibal urged the division bench comprising Justices Hemant Gupta and Sudhanshu Dhulia to refer the matter to the Constitution Bench. He submitted that the issue involved in this case is not merely confined to Article 19 but relates to the concept of 'qualified public space' evolved during the course.

Advocate Prashant Bhushan submitted that it was not necessary for the petitioners there to raise Essential Religious Practice argument and they only need to show bona fide practice. He also submitted that a public educational institution cannot impose a dress code. Further, restricting only hijab when other religious dressings like turbans are permitted, is unconstitutional, he said.

The issue requires consideration by a larger bench: Sibal

"The question your lordships first have to decide is if wearing of dress is an expression of self, whether it is linked with bodily autonomy? I can wear a mini skirt or whatever I want. Dress is both at the heart of privacy and expression Article 19(1)(a) If I have that right in a public place, does that right get extinguished when I enter the school gate? Constitution does not say so. Article 19 does not say so. What is the limit under Article 19? Public order. That is the only limit. That is the real constitutional question."

Sibal said this question has never been answered by the Supreme Court.

Expressing his agreement, Justice Dhulia said, "It is an entirely new concept - the phrase used is "qualified public space". Where do you get this concept from?"

"Nowhere. That is a Constitutional issue. It is not in 19," Sibal said.

He argued that wearing hijab relates to the personal dignity and identity of the individual.

For example, there are black children in America. They dress in a particular way, hair in braids etc. Can a school in America say it is not allowed?

You can stop if it impacts public order, morality. If I go to school in a mini skirt, then may be school can stop. We are all ad idem that these children are wearing the school dress. There is no violation of the dress code. I am wearing something beyond. What does it reflect? It reflects my culture, reflects me. And my fellow students are not entitled to know that?"

He argued that the right to wear hijab cannot be curtailed citing public order.

"Since the birth of Karnataka, girls have been wearing hijab and there has been no untoward incident. What was the compelling need to pass this order? There was no compelling need. If I wear a hijab, how is it detrimental to the public order?"

Justice Dhulia said that in the aftermath of girls wearing hijab to school, some other students started wearing shawls and it was in that context.

Sibal responded, "They can't wear to interfere with our right. They (saffron shawl wearing students) tried to create an issue. And when did they start? They wanted to create an atmosphere where State will take an action. Preserving the composite nature of our culture is a fundamental duty. They have no right to object."

Sibal argued that hijab is also a cultural right protected under Article 29.

"The consequence of depriving young girls is depriving them of fundamental rights of access to education, privacy, dignity."

He cited the RTI reply obtained by Deccan Herald, as per which, 145 out of 900 Muslim girls in Dakshina Kannada took transfer certificates after the ban.

"And all the 900 Muslim girls may not be hijab wearing. So, if you take the percentage out of hijab wearing girls, it is more."

Bhushan submitted, "Strictly speaking, a school cannot restrict entry for not wearing a dress. A private club can. For example, a golf club. But a public educational institution, particularly a govt institution, strictly speaking cannot impose a dress code."

"So your submission is that govt schools cannot have a uniform?" Justice Gupta asked.

Bhushan responded, "Yes, but even if they can, they can't restrict hijab."

Justice Dhulia pointed that there are statutory rules give the power to prescribe uniform.

Bhushan responded that even if the law gives them the right to impose a dress code, hijab ban has to be justified on one of the grounds in Article 19(2).

Bhushan submitted that the religious practice can be proscribed only if it is against the grounds of public order, health or morality and these three rights are absent in the case of hijab.

"It becomes discriminatory because you have only banned the hijab. You have not banned other religious markers like pagdi for Sikhs, tilak for Hindus, cross for Christians. You have singled out hijab, which is a Muslim identity. If the rationale is to erase religious markers from school, then you have to proscribe all religious expressions."

"I don't have to say it's essential, it's enough to say that it's something people from a particular religion like to wear to express their religious identity.

Over the years, it has acquired a religious identity, and that is protected under Article 25. It may not be prescribed as an essential practice by Quran. But if it is a bona fide practice followed by several women, then it cannot be proscribed."