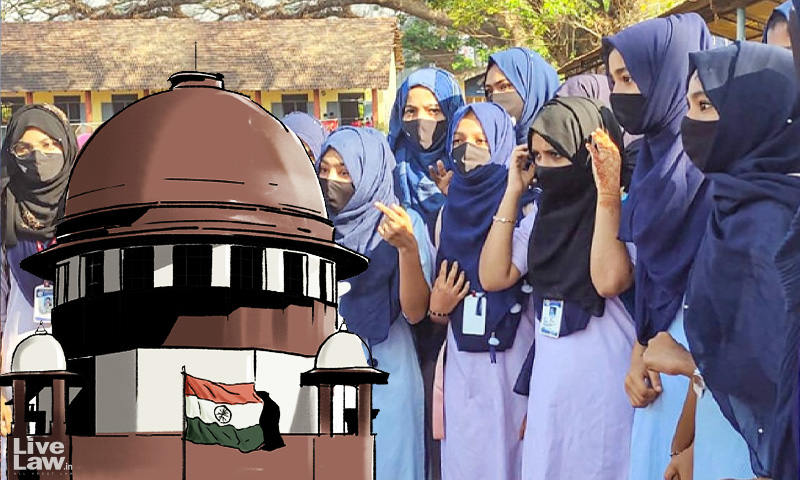 The Supreme Court, on Monday, heard a batch of petitions challenging the Karnataka High Court's judgment which upheld the ban on wearing hijab by Muslim girl students in some schools and colleges in the State.The matter was heard by the bench comprising Justices Hemant Gupta and Sudhanshu Dhulia. At the outset, Senior Advocate Dushyant Dave appearing for petitioners, requested the matter...

The Supreme Court, on Monday, heard a batch of petitions challenging the Karnataka High Court's judgment which upheld the ban on wearing hijab by Muslim girl students in some schools and colleges in the State.

The matter was heard by the bench comprising Justices Hemant Gupta and Sudhanshu Dhulia.

At the outset, Senior Advocate Dushyant Dave appearing for petitioners, requested the matter to be taken on a non-miscellaneous day, while stating that there were "substantial questions, not only constitutional issues, but questions of general importance" which would be argued and thus the submissions would be rather detailed. He stated that it was difficult to get books inside a crowded court room on miscellaneous day. Senior Advocate Rajeev Dhavan added to the request stating that the court was extremely crowded. However, the court insisted on starting the matter and it was accordingly heard on the same day at 2 p.m.

Before the merits of the case were heard, Advocate Ejaz Maqbool suggested that all pleadings could be compiled into one matter, which could be dealt as the lead matter. The bench agreed to the same and opined that the said compilation could be completed in a day or two. The bench was informed that within the batch of the petitions, some petitions were filed against the interim order passed by the Karnataka High Court. The bench accordingly noted that such petitions would be disposed of as infructuous.

Is wearing a headscarf an essential religious practice?

Senior Advocate Rajeev Dhawan argued that as per Article 145(3) of the Indian Constitution, a constitutional issue must be referred to constitution bench. He stated that there were a large number of women involved in the issue, and the question that arose was whether these women should yield to the dress code or government and whether wearing a headscarf was an "essential religious practice". To this, Justice Gupta remarked that while wearing of the scarf may or may not be an essential practice, the question could be as to whether the government could regulate the dress code. Sr. Adv. Dhawan argued that even in the Supreme Court, there were judges wearing tilak, pagdis etc. However, Justice Gupta interjected stating that 'Pagdi' was a non-religious item and used to be worn in royal states. He stated that–

"My grandfather used to wear it while practicing law. Don't equate it with religion...Our Preamble says ours is a secular country. In a secular country can you say that a religious clothing has to be worn in a government run institution? This can be an argument."

Sr. Adv. Dhawan further stated that the decision of Supreme Court would be "momentous" and be looked at all over the world as Hijab was worn in many civilizations. He further argued that while earlier it had been suggested that scarf of the same colour of uniform could be worn, students were now being asked to remove scarfs in the class rooms. He also highlighted that there were inconsistent High Court orders on the issue as one order by the Kerala High Court stated that it was permitted and another by Karnataka High Court stated that it was not.

Can Dress code Be Regulated?

Senior Advocate Sanjay Hegde started the main arguments today. His main point was that the Court should not go into the broader questions in the case, as it can be decided solely on the narrow point whether the State Government had the power under the Karnataka Education Act to prescribe the uniform.

After narrating the facts of the petition relating to Udupi PU College students to the bench, he argued that–

"What does the Karnataka Education Act say? Can you make rules and give direction and can those directions run foul of other provisions of the Act? If it can be decided on the basis of the Act, then broader questions need not be gone into...College Development Committee has no legal sanctity as per Act. It includes the local MLA and politicians."

He argued that the issue that arose was whether as per Section 133(2) of the Karnataka Education Act, it was mandatory for students to wear uniforms as mandated by the governing body. While continuing his argument, he asked the bench if an institution could debar someone from class for wearing a particular style of dress? He stated–

"Can the education of women be made contingent on not wearing a particular dress?...Can you tell a girl, I'm sorry using a wrong phrase, a grown up woman, that you will have no control over your own concept of modesty and say you cannot wear a chunni?"

Justice Gupta retorted to this line of argumentation by highlighting that different places required different dress codes. He stated–

"I remember the news- a lady advocate came in a jeans and it was objected to saying you can't wear jeans. But technically can the woman say you can't bar me for wearing a jeans...If you go to a Golf Course, there is a dress code. Can you say I can wear the dress I like there?...In some restaurants, you have a formal dress code, in some you have a casual dress code."

To this, Sr. Adv. Hegde stated that everything came down to the context and in the present case, the context was that of the access to education being conditional to a vulnerable section of the society. He gave the examples of similar opposition being faced by Ishwar Chandra Vidyasagar, Fatima Shaikh and Savitri Phule when they were propagating for women's education. He stated that the question was whether the State had power to prescribe uniform as per the Karnataka Education Act. To this, Justice Gupta stated that if there was no specific power, Article 161 would be applicable.

Provisions of the Karnataka Education Act, 1983

Furthering his arguments, Sr. Adv. Hegde drew the attention of the court to Section 39 of Karnataka Education Act. Section 39 prohibits any local authority or the Governing Council of any private educational institution from denying admission to any citizen on ground of religion, race, caste, language or any of them or; directly or indirectly encouraging any propaganda or practice wounding the religious feelings of any class of citizens of India or insulting religion or the religious belief of that class in the educational institution. He further highlighted Section 133 of the Act which states that powers of State to give direction are subject to other provisions of the Act and the rule making power. He submitted that dress code was not among the category of subjects on which government could make rules.

Sr. Adv. Hegde referred to other provisions of the Act and stated that educational institutions were required to informed parents about change in uniform at least one year in advance and that any uniform prescribed could not be changed for 5 years. He also submitted that the government prescribe curricula did not include power to prescribe uniform. He then stated that the government order stated that a person cannot wear a uniform showing their religion and this created a substantial disadvantage to Muslim women. Further, he argued that–

"Government Order cannot be issued under a rule making power and it goes against substantive provisions of Section 7 and 39(b) and (c) of the Act. Even under the Rules, Rule 11, uniform prescribed must be in consonance with the mandate of Section 39(c)...When the legislature did not make any specific provision for uniform in the Act, then the rules which are made for primary education prescribes the manner in which uniform can be changed, then by a mere govt order which comes after Act and rules in the legislative hierarchy, cannot set out new disabilities."

The gist of his argument was that the power to prescribe uniform was not given to the government and even if a person was wearing an additional item on the uniform, it would not be in violation of the uniform. Here, Justice Dhulia orally remarked that strictly speaking hijab might not be a religious practice. He further stated that scarf was already a part of uniform as a chunni was allowed. Justice Gupta stated that chunni was different and could not be compared to hijab, as it was worn on shoulders.

Additional Solicitor General, K.M. Nataraj, appearing for the State of Karnataka stated that the issue was very limited, and pertained to discipline in school alone. To this, Justice Gupta asked–

"How is the discipline of school violated if hijab is worn?"

At this juncture, Advocate General of Karnataka Prabhuling Navadgi elaborated upon the State's stance by stating that after some students started protesting for hijab, another set of students wanted to wear bagwa shawls. This led to a situation of unrest and in this backdrop the Government Order was issued on Feb 5. He stated that–

"State was very conscious, that we will not prescribe uniforms. As per Rule 11, uniforms are prescribed by the institutions. We directed institutions to prescribe uniforms. Some of the institutions prohibited hijab. Those resolutions have not been challenged. This Govt order does not violate the rights of the students. We are not saying don't wear hijab or wear hijab. We don't say either way. We only say follow the uniform prescribed. Once the students realized that institutions prohibited hijab invoking Rule 11, they elevated their argument that our rights under Article 25 are violated. The Govt Order is not very happily worded, but the purport of the order is to follow the prescribed uniform."

When asked if there would be a hijab permitted in a minority institution, he stated that the State had left it to the institution. The bench also asked him what the stance of the government was regarding the government colleges.

"In Karnataka, there might be institutions of Islamic managements allowing hijab. There is no government interference. We have left it to the College Development Council and some of them, like Udupi PUC, have taken a decision to not allow hijab."

With this, the bench decided to continue the hearing on Wednesday at 2 PM. Live updates from the hearing can be read here.

A batch of 23 petitions was listed before the bench. Some of them are writ petitions filed directly before the Supreme Court seeking the right to wear hijab for Muslim girl students. Some others are special leave petitions which challenge the judgment of the Karnataka High Court dated March 15 which upheld the hijab ban. In the last hearing of the matter, the petitioners had sought request of adjournment of the matter for two weeks. However, the court had orally observed that it would not permit "forum shopping" and issued notice to the State of Karnataka and proceeded to post the matter on September 5, 2022.

The SLPs has been filed against the judgment dated March 15 passed by the High Court of Karnataka, upholding Government Order dated 05.02.2022, which has effectively prohibited Petitioners, and other such female Muslim students from wearing the headscarf in their Pre-University Colleges. A Full Bench of the High Court comprising Chief Justice Ritu Raj Awasthi, Justice Krishna Dixit and Justice JM Khazi held that wearing of hijab by women was not an essential religious practice of Islam. The Bench further held the prescription of uniform dress code in educational institutions was not violative of the fundamental rights of the petitioners.

A bench comprising Justices Hemant Gupta and Sudhanshu Dhulia will hear a batch of petitions challenging the ban on wearing #Hijab in educational institutions in #Karnataka.