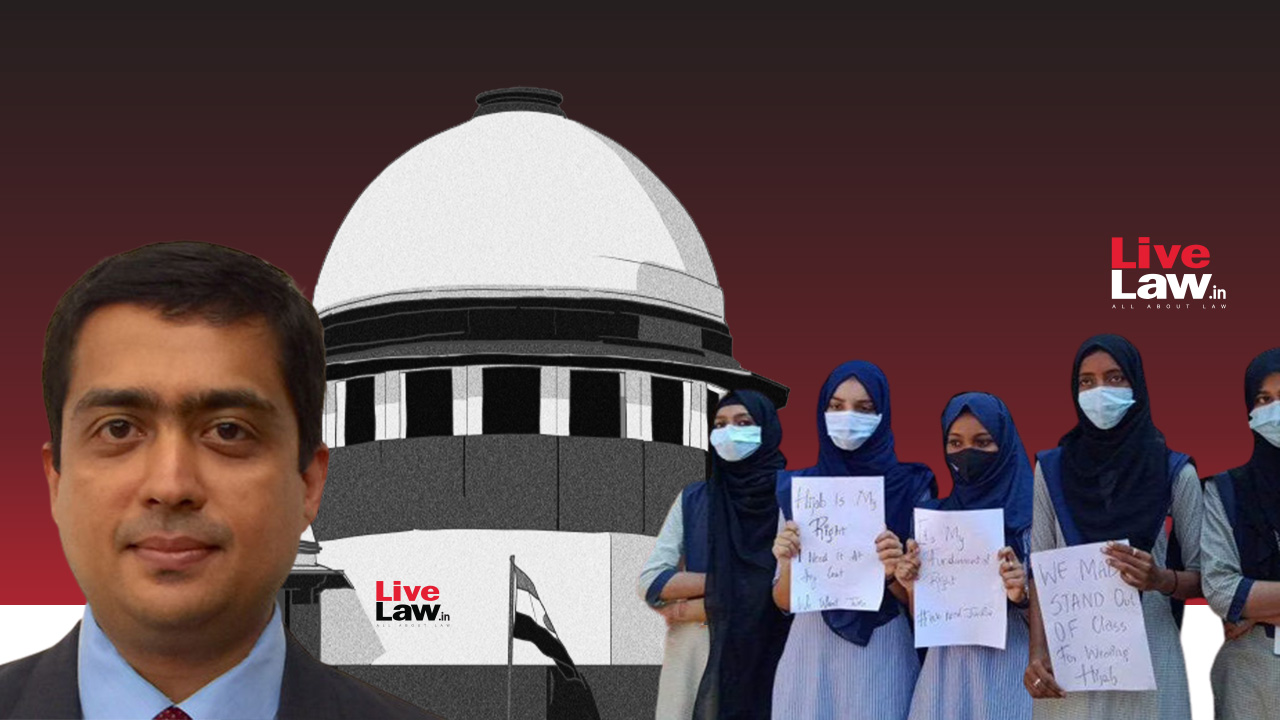 The Supreme Court, on Wednesday, continued hearing the batch of petitions challenging the Karnataka High Court's judgment which upheld the ban on wearing of Hijab by Muslim girl students in some schools and colleges in the State. The matter was heard by the bench comprising Justices Hemant Gupta and Sudhanshu Dhulia.Senior Advocate Devadatt Kamat appearing for the Petitioners argued that...

The Supreme Court, on Wednesday, continued hearing the batch of petitions challenging the Karnataka High Court's judgment which upheld the ban on wearing of Hijab by Muslim girl students in some schools and colleges in the State. The matter was heard by the bench comprising Justices Hemant Gupta and Sudhanshu Dhulia.

Senior Advocate Devadatt Kamat appearing for the Petitioners argued that the Government Order is not "innocuous", as argued by the State, but violates students' fundamental rights under Article 19, 21 and 25 of the Constitution. He contended that the GO stated that prohibiting Hijab will not violate the right to practice religion and left the matter to be decided by the College Development Committees. "If the "mighty State" already says that, CDCs will have no other option but to ban hijab, he added.

He further submitted that India practices "positive Secularism" and hence, government must exercise "reasonable accommodation" and allow the Petitioners to wear headscarf in addition to uniform.

He sought that the matter be referred to a Constitution Bench since, according to him, the case involves a primary question as to whether the State has failed in its obligation to provide for reasonable accommodation for a student's rights under Articles 19, 21 and 25.

"I am not challenging the prescription of uniform. Your lordships are right, can anybody turn up in a jeans? I respectfully bow down. I do not challenge the uniform. The challenge is against the State saying it will not allow student to wear hijab despite wearing uniform."

Kamat submitted that right to freedom of expression under Article 19 of the Constitution includes dress.

He said, "By actually saying if you come in school wearing a hijab we will not allow you, State violates Article 19… The GO is giving petitioners a Hobson's choice, forcing them to choose between their identity and dignity and right to education."

"You can't take it to illogical ends. Right to dress will include right to undress also?" Justice Gupta orally remarked.

"Nobody is undressing in a school… Question is wearing of this additional dress as part of Article 19, can it be restricted?" Kamat responded.

He submitted that reasonable restrictions under Article 19(2) relating to public order, morality, do not get attracted to the present case.

"Advocate General conceded that the GO is not based on public order… Then ground of morality. If I wear a headscarf, whose morality is offended?... Whether the wearing of headscarf matching the colour of uniform is offending anyone else's fundamental rights or legitimate state interest so as to warrant the State issuing the GO?"

Whether Fundamental Rights of students can be suspended?: Kamat

Kamat asked whether a student citizen is expected to surrender her fundamental rights under Article 19, 21 and 25 as a pre-condition to access education.

"The long and short of the argument of the other side is you exercise the right outside the school. This argument came to be rejected in the Bijoe Emmanual case."

In Bijoe Emmanual v. State of Kerala, relief was granted to Jehovah Witness students who were expelled from school for not singing the national anthem due to their faith. It had observed that personal views and reactions regarding a particular religious practice are irrelevant if the belief is held genuinely & conscientiously as part of religion.

"If the other side's argument is to be accepted, the Supreme Court should have shunted out the students (in Biijoe Emmanual case) saying keep religion out of school," Kamat said.

Justice Dhulia however opined that this case was on a different footing.

"In that case, judgment was by Justice Chinnappa Reddy, it was held that there was no insult to national anthem, as the students stood up. Then it touched upon tolerance. It is on a different case," Justice Dhulia said.

Kamat argued that the petitioners were compliant with school uniform and sought to wear headscarf in addition to that.

"It is a case of headscarf; it is not a burqa or jilbab…they are different."

He pointed out that the Petitioner is present in court wearing Hijab, but, "Does the head scarf offend anyone? Does the headscarf of the same uniform colour cause any indiscipline?"

Kamat mentioned that even Kendriya Vidyalayas, under the Central Government, allow wearing hijab.

He referred to the circular for Kendriya Vidyalayas and submitted that head scarf with matching colour of uniform for girls is allowed.

"It makes a reasonable accommodation for Muslim girls to wear head scarf…This was placed before the High Court. But High Court said Central Government is different from State Govt. And this practice (in KVs) is in vogue even today."

Kamat argued that the Government Order, by declaring that Hijab is no part of Article 25, targets one community.

"Your reading of GO may not be correct, because it is only one community which wants to come in religious dress," Justice Gupta said.

This prompted Kamat to highlight alleged instances of students from other religions, wearing purported religious symbols to schools.

However, Justice Gupta responded, "Rudraksh or Cross is different. They are worn inside dress, not visible to others. There is no violation of discipline."

"The question is about reasonable accommodation not about whether visible or not," Kamat said.

He heavily relied on a judgment of the Constitutional Court of South Africa, in KwaZulu-Natal and Others v Pillay, pertaining to the right of a Hindu girl from South India to wear a nose ring.

It was the girl's case that wearing nose ring was a part of longstanding tradition in South India. However, the State had argued that the girl had agreed to the school code. Further, she was free to wear it outside the school, and hence, removing the same for few hours during school does not impact her culture.

The South African Court had held that asking the girl to remove nose ring even for a short period will send out the message that she and her religion were not welcome.

Kamat submitted that similar arguments have been made by the Karnataka government in this case.

At this juncture, Justice Gupta said that nose pin is not a religious symbol.

"Evidence was led to show it has a religious belief too," Kamat responded.

Justice Gupta then said that all over the world, women wear earrings, but it is no religious practice.

However, Kamat insisted that wearing of "Bindi" and "nose ring" has religious significance while performing certain rituals.

"Nose pin is worn by women to develop good virtue and also it is believed to bring prosperity. It is very much religious," he said.

Justice Gupta then pointed out that the judgment is in context of South Africa, which does not have as diverse population as India.

"All other countries have a uniform law for its citizens… forget about South Africa, come to India," Justice Gupta said.

Kamat also referred to a 2015 US Supreme Court decision which allowed head scarf in employment.

"How can we compare USA and Canada with India? We are a conservative society... Their judgment is based on their society, their culture, we can't totally follow," Justice Gupta said.

He also referred to a Canada judgment allowing wearing of kara in school for Sikhs.

Kamat submitted that Secularism in India is not the concept of negative secularism as followed in France or Turkey, where display of religion in public is offensive.

"This Court has not accepted that, but has accepted positive secularism… The constitutional standpoint is all religions are manifestation of same god."

"Does all religions accept this? Is that the stream of thought accepted by all religions?" Justice Gupta asked.

Kamat responded that he was merely citing (paraphrasing) what was held in Aruna Roy judgment.

In Aruna Roy v. Union of India the Supreme Court held that all religions have to be treated with equal respect and that there has to be no discrimination on the ground of any religion.

Kamat argued, "Secularism has a positive meaning… Secularism does not mean that students of only one faith will not display their religion."

He submitted that the Constituent Assembly had rejected a proposed amendment moved by Tajammul Hussain, seeking to prohibit display of religion in public.

Kamat expressed his disagreement with the reasoning given by the Karnataka High Court while upholding hijab ban in schools/colleges.

He submitted that High Court said hijab is against constitutional morality.

"With due respect, it is her choice. I may not personally agree with it. But it is her decision."

"Purdah and Hijab are different. High Court saying this in a judicial review I cannot understand. This violates decisional autonomy," Kamat argued.

He added that if the Petitioners succeed in showing that there can be no restriction on their right to wear right Hijab, then they don't have to go into the question of essential religious practice under Article 25.

Kamat said High Court gave the example of prisons and said prisoners have no fundamental rights.

"I am amazed. High Court says once you go to school you are in the "custody" of teachers… High Court gives the examples of prison, detention and mentions qualified public spaces...this is leading to the argument that once you enter a school premise, you are like a convict," he said.

At this juncture, Justice Gupta responded that this comparison is of general nature and the High Court did not compare students with prisoners.

"What it says, qualified public spaces like schools, courts...you are in court, you are wearing a uniform… It is a way of expression, nothing more than that. It does not compare school with..." the Judge said.

In the last hearing of the matter, the main arguments were started by Senior Advocate Sanjay Hegde who stated that the Court did not need to go into the broader questions in the case, as it could be decided solely on the narrow point of whether the State Government had the power under the Karnataka Education Act, 1983 to prescribe the uniform.

The arguments raised by Senior Advocate Hegde in the last hearings included a woman's right to elect to dress modestly, that scarf was already a part of uniform as a Chunni was permitted to be worn and; that the government did not have the power to prescribe uniform.

Per contra, the Additional Solicitor General, K.M. Nataraj, appearing for the State of Karnataka had stated that the issue was very limited, and pertained to discipline in school alone.

The Advocate General of Karnataka, Prabhuling Navadgi had also submitted that there was no government interference in the matter and the decision of permitting students to wear Hijab had been left to the College Development Councils.