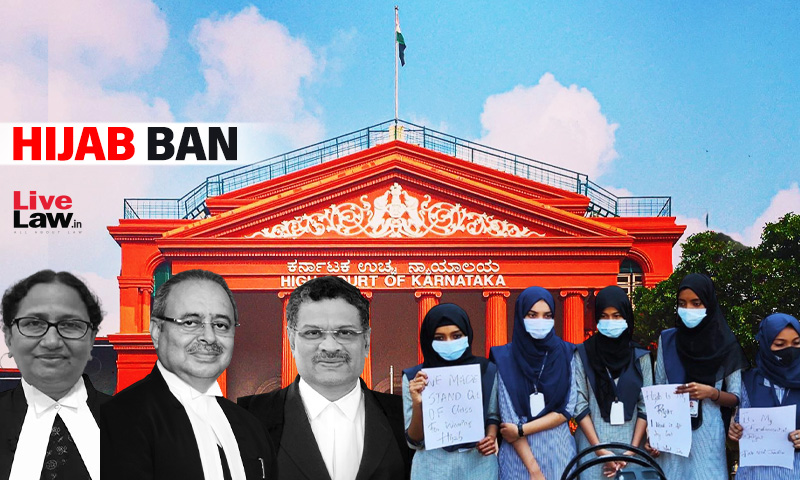 Wearing of hijab is not a part of Essential Religious Practice in Islamic faith and thus, is not protected under Article 25 of the Constitution, the Karnataka High Court has held today.A Full Bench of the High Court further held that prescription of school uniform by the State is a reasonable restriction the students' rights under Article 25 and thus, the Government Order issued by the...

Wearing of hijab is not a part of Essential Religious Practice in Islamic faith and thus, is not protected under Article 25 of the Constitution, the Karnataka High Court has held today.

A Full Bench of the High Court further held that prescription of school uniform by the State is a reasonable restriction the students' rights under Article 25 and thus, the Government Order issued by the Karnataka government dated February 5 is not violative of their rights.

Accordingly, the Court has dismissed the petitions filed by Muslim girl students, challenging the action of a government PU colleges in denying their entry for wearing a hijab (headscarf).

The Court said that it has framed the following questions :

1. Whether wearing hijab is ERP in islamic faaith protectedunder Article 25

2. Whether prescription of school uniform is violative of rights.

3. Whether GO of Feb 5 apart from being incompetent and manifestly arbitrary violates Articles 14 and 15

4. Whether any case is made out for issuance of disciplinary inquiry against college authorities.

Chief Justice Ritu Raj Awasthi, who read out the operative portion of the judgment in the open court, said as follows :

"Our answers to the questions are, wearing of Hijab by Muslim women does not form Essential Religious Practice in Islamic faith.

Our second answer is prescription of school uniform is only a reasonable restriction, constitutionally permissible which students cannot object to.

In view of the above, the government has power to issue the GO of February 5 and no case is made out for its invalidation.

No case is made out for the issuance of disciplinary proceedings against respondents and writ of quo warranto is not maintainable.

All writ petitions being devoid of merits are dismissed".

For separate and detailed reports about the judgment, refer the following reports :

Holy Quran Does Not Mandate Wearing Of Hijab; Islam Does Not Cease To Exist If Hijab Is Not Followed : Karnataka High Court

Hijab Ban| Insistence On Wearing Purdah, Veil Or Headgear In Any Community May Hinder Emancipation Of Women : Karnataka High Court

An important question before the Court in this case was whether wearing of hijab is part of essential religious practise of Islam and whether State interference in such matters is warranted. The court was also called to consider whether wearing of hijab partakes the character of right to expression under Article 19(1)(a) of the Constitution and whether restriction can be levied only under Article 19(2).

Meanwhile, it had passed an interim order, restraining the students from wearing any sort of religious clothes in classrooms, regardless of their faith.

The controversy erupted after few Muslim girl students of Govt PU college were denied entry for wearing headscarf. They contended that wearing hijab is part of their religious and cultural practice. The petitioners had also challenged a Government Order dated February 5, which observed that banning hijab will not violate Article 25, and ordered that students should wear the dress code prescribed by the concerned College Development Committees.

The matter was first listed before a single bench of Justice Krishna S. Dixit, which  referred the petitions to larger bench observing that "questions of seminal importance" are involved.

It was the petitioners' case that wearing Hijab is an essential religious practice under Islam, and suspension of the same, even for a few hours during school, undermines the community's faith and violates their fundamental rights under Article 19 and 25 of the Constitution. They heavily relied on a judgment of the Constitutional Court of South Africa, in KwaZulu-Natal and Others v Pillay, which upheld the right of a Hindu girl from South India to wear a nose ring to school.

If Turban Wearing People Can Be In Army, Why Not Hijab Wearing Girls In Classes : Ravivarma Kumar To Karnataka High Court

The Advocate General appearing for the State argued: (i) wearing of hijab does not fall within the essential religious practise of Islam; (ii) right to wear hijab cannot be traced to freedom of expression under Article 19(1)(a) of the Constitution; (iii) Government Order dated February 5 empowering College Development Committees (CDCs) to prescribe uniform is in consonance with the Education Act.

It was further the State's contention that wearing hijab does not stand the test of constitutional morality and individual dignity, laid down by the Supreme Court in Young Lawyers Association v. State of Kerala (Sabarimala judgment).

Hijab Not Essential Practice Of Islam, Karnataka AG Says; What Was Necessity Of Saying This In GO, Asks High Court?

The Respondent college and its teachers argued that students must follow the prescribed uniform to maintain discipline and public order. It is their case that wearing religious symbols in a public place like school would be conducive to the Constitutional ethos of Secularism.

In his rebuttal arguments, Kamat argued that people who want to wear head scarf are being denied right to education on the pretext of the impugned GO. So far as constitutional morality is concerned, he submitted that Sabarimala and Navtej Johar judgments that were cited by the Advocate General are "pro-choice" judgments. "Constitutional morality is pro-choice. It is a restriction on state power," he said.

(Edited and compiled by Akshita Saxena)