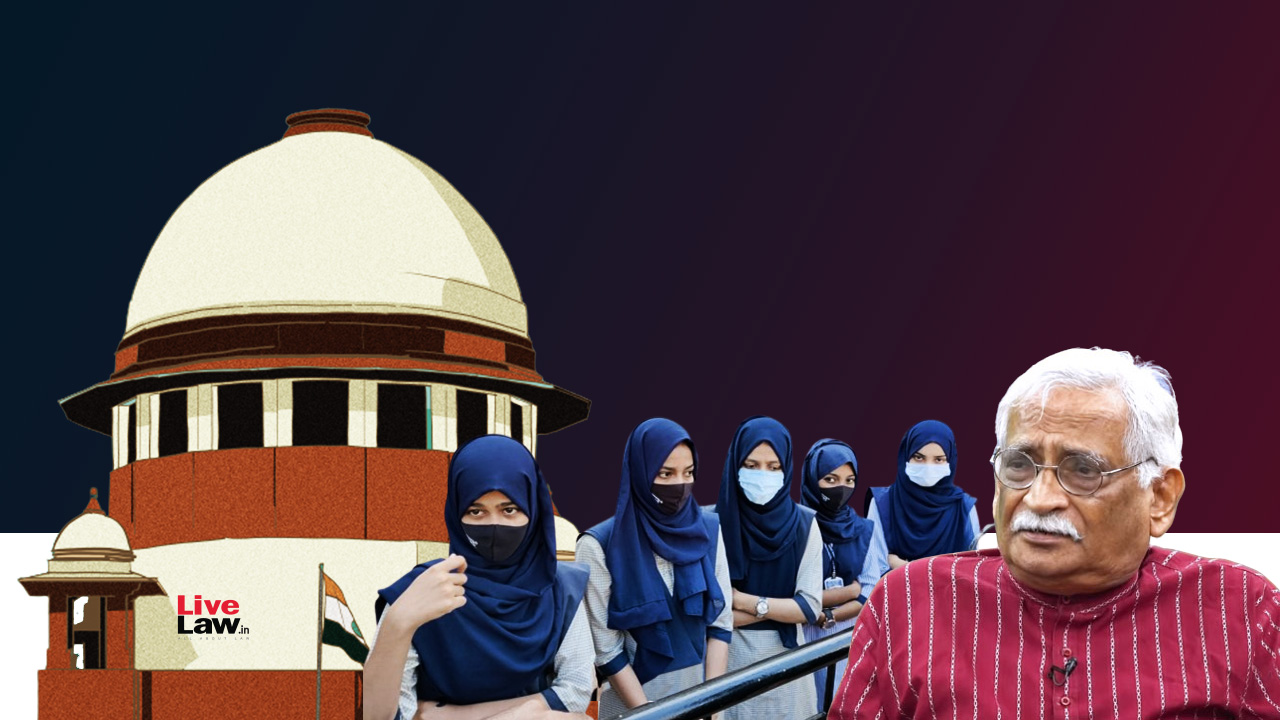 The Supreme Court is continuing hearing in the batch of petitions challenging the Karnataka High Court's judgment which upheld the ban on wearing hijab by Muslim girl students in some schools and colleges in the State. Today is the fifth day of hearing by bench comprising Justices Hemant Gupta and Sudhanshu Dhulia.Today, Senior Advocate Rajeev Dhavan appearing for the Petitioners argued that...

The Supreme Court is continuing hearing in the batch of petitions challenging the Karnataka High Court's judgment which upheld the ban on wearing hijab by Muslim girl students in some schools and colleges in the State. Today is the fifth day of hearing by bench comprising Justices Hemant Gupta and Sudhanshu Dhulia.

Today, Senior Advocate Rajeev Dhavan appearing for the Petitioners argued that once a practice is shown to be bona fide,it is permissible.

He urged the Bench to apply the "Doctrine of Proportionality" and take the "least invasive" approach. Dhavan also argued that the Karnataka GO is based on false foundations, inasmuch as the decisions cited by it to ban hijab in schools were passed in different context.

(i) Right to Dress is part of free speech and is subject to reasonable restrictions for public order;

(iv) Person wearing hijab cannot be discriminated against on grounds of religion and sex.

Dhavan argued that this is not a simple case about discipline. "The reason why it is important, when the case was decided, headlines were not that dress code was upheld but was hijab was struck down."

The Senior Advocate responded, "Papers reflect what was important."

Question of ERP not relevant if practice is bona fide: Dhavan

Dhavan referred to the Bijoe Emmanual decision which held that once it is shown that a practice bona fide, it is permissible.

He said that the High Court's finding that since Quran does not prescribe any punishment for not wearing hijab, it is not mandatory, is "puzzling". The finding, he said ignored the fact that millions of women wear hijab bonafidely.

"According to the tenets of the faith, if something has been followed, it is allowed, if it is bonafide, you don't have to go back to the text. We have to examine if the practice is prevalent and is bona fide…What is the dispute, whether it is an essential practice. If all over India, hijab is practiced, lordships will only see if it is a bona fide practice," Dhavan argued.

"Hijab across the board is permitted in public places. So what is the basis to say hijab can't be in class room and is opposed to public order? When you say you can't allow burqa in school, it is reasonable, because you want to see the face. But what reasonable objection can be there to the headscarf?"

He relied on the Ratilal Gandhi case where the Supreme Court held that if the belief of the community is proved undoubtedly, a secular Judge is bound to accept that belief and it is not for him to sit in judgment on that belief.

"If it is shown that hijab is an established practice in Karnataka, no outside secular authority can say it is not," Dhavan said.

Dhavan said that the test has to be one of "proportionality" and must take the "least invasive" approach. Reliance was placed on Modern Dental College case.

He submitted that in certain states, for example State of Kerala has taken a view that hijab is farz.

"What is the basis of saying it (hijab) is a farz?" Justice Gupta asked Dhavan.

He responded that the Kerala High Court, in its judgment holding hijab to be an essential practice, referred to Quranic injunctions and the Hadiths to conclude that it is a farz to cover the head and wear the long sleeved dress except face part.

Dhavan said he does not expect the Courts to be maulvis, however, if it were to interpret the text, the answer of the text is that it is farz.

"But I don't go that far. If it is a ritual that is prevalent, and is bona fide, your lordships will allow," he said.

"Regardless of the mandate of the holy book?" Justice Gupta asked.

Dhavan responded, "Provided it is not against the holy book. To that extent enquiry can be there."

Karnataka GO against Hijab based on false foundations: Dhavan

Dhavan referred to the Govt of Karnataka guidelines of July 2021 to argue that no uniform was mandated in PUC back then and thus, hijab was permissible. However, suddenly, in September, the students were "heckled" and were "discriminated" against.

Dhavan pointed out that the impugned GO, which excluded the right to wear hijab, is based on a Kerala High Court decision against hijab but fails to consider that the said decision was rendered in context to a convent school.

The GO also refers to a Bombay High Court decision but fails to consider that it was a case regarding right to wear hijab in an "all-girls school".

"The very foundation of the GO is built on false foundations…it violates Article 14 and 15. This kind of targeting is not permissible in Constitution," he argued.

Dhavan : In my respectful submission, there was no foundation in GO against Hijab, it is probably to target Muslims and Muslim women particularly, and it violates Article 14 and 15. This kind of targeting is not permissible in Constitution.#Hijab #SupremeCourtOfIndia

Dhavan said that across India, across the world, hijab is recognized as valid. The only justification given by the Karnataka government is that schools are "qualified public places".

"That by itself is no justification," he said.

He mentioned that Kendriya Vidyalayas permit the hijab. "There is no justification given why they should be uniformity across the board."

Dhavan lastly referred to a judgment by the High Court of Kenya in Mohamed Fugicha v. Methodist Church which scrapped the Kenyan govt's attempt to abolish hijab. He added the English courts specifically permit scarf.