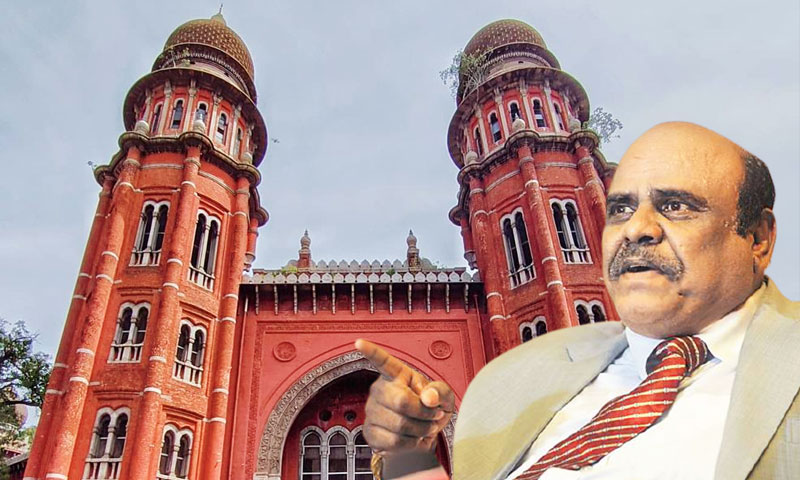 A division bench comprising Justices M Sathyanarayanan and R Hemalatha directed the Tamil Nadu Government and the state police to take steps to block the URLs of the videos featuring the derogatory remarks of Karnan in Facebook, Whatsapp and YouTube.

The order was passed while allowing the prayer for ad-interim relief made in the Public Interest Litigation petition filed by Bar Council of Tamil Nadu and Puducherry.

The bench further made a prima facie observation that the statements of Karnan constituted commission of various cognizable offences including under the Sexual Harassment of. Women at Workplace (Prevention, Prohibition and Redressal) Act, 2013.

Observing this, the bench sought the responses of the state government and Tamil Nadu police on the plea made by the Bar Council for criminal action against Karnan. The case will be next considered on December 16.

Taking strong exception to the conduct of Karnan - who is the one and only High Court judge to be convicted for criminal contempt by the Supreme Court - the bench observed in the order :

"It is rather unfortunate to note that the ninth respondent(Karnan), who held an important constitutional post, has gone to such a level to repeatedly make scandalous, obscene, vituperative & unparliamentary remarks against former & sitting judges of SC & HC and their family members, especially women.

His tirade is going unabated against female staffers and women lawyers, including a designated senior advocate".

The bench noted that he has uploaded around 12 videos recently with derogatory remarks against judges & their families.

The bench also noted that Karnan barged into the residence of a former Supreme Court judge's residence at Chennai and created ruckus there, leading to the registration of FIR by the police against him.

The Court said that if no interim order was granted Karnan will cause "incalculable damage" with his derogatory and defamatory allegations.

Senior Advocate S Prabhakaran, appearing for the Bar Council, submitted that Karnan was abusing his freedom of speech to scandalize the judges, who are in no position to respond to his unsavoury remarks.

He said that the authorities are turning a blind eye to the acts of Karnan and this was shaking the constitutional authority of the judges.

"A normal prudent man in his senses will not make the kind of statements made by Karnan", the senior lawyer submitted.

Recently, a group of women lawyers of Madras High Court had submitted a complaint before the Chief Justice of India seeking action against Karnan.

In May 2017, C S Karnan became the first sitting High Court judge to be held guilty of criminal contempt of court. A constitution bench of the Supreme Court sentenced him to six months imprisonment for his multiple acts of public utterances against judges and interference with the administration of justice. As a judge, Karnan had also extraordinary acts like passing a judicial order to stay his own transfer and issuing arrest warrant against Supreme Court judges.

After the sentence, he went into hiding. He was arrested a month later and was sent to Presidency Jail in Kolkata, where he underwent imprisonment till December 2017