Holy Quran Does Not Mandate Wearing Of Hijab; Islam Does Not Cease To Exist If Hijab Is Not Followed : Karnataka High Court 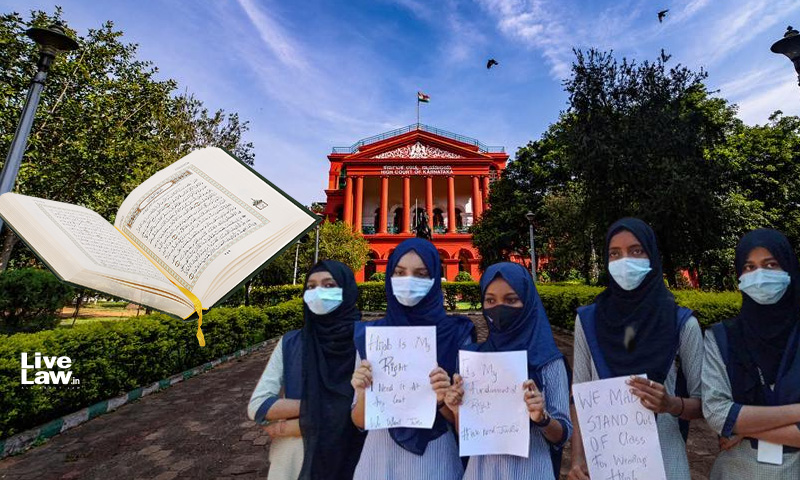 The Court also observed that the prescriptions in suras regarding Hijab are not mandatory.

"The Holy Quran does not mandate wearing of hijab or headgear for Muslim women. Whatever is stated in the above sūras, we say, is only directory , because of absence of prescription of penalty or penance  for not wearing hijab, the linguistic structure of verses supports this view", the Court observed.

The bench referred to various Sūra's and observed, "This word (hijab) as such is not employed in the Quran, cannot be disputed, although commentators may have employed it."

The judgement, after quoting the footnote 3760 to Verse 53, (from the referred Holy Quran), observed, "…In the wording, note that for Muslim women generally, no screen or hijab (Purdah) is mentioned, but only a veil to cover the bosom, and modesty in dress. The screen was a special feature of honour for the Prophet's household, introduced about five or six years before his death...".

The bench further observed, "Thus, there is sufficient intrinsic material within the scripture itself to support the view that wearing hijab has been only recommendatory, if at all it is."

Hijab at best a cultural practice

The Court then noted that the essential part of a religion is primarily to be ascertained with reference to the doctrine of that religion itself. It refused to accept the contention of the petitioners relying on the sūra (xxxiii), verse 59, that wearing hijab is an indispensable requirement of Islamic faith.

The Court went into the historical aspects of the said sura and opined that hijab at best can be a cultural practice and not religious.

"Regard being had to the kind of life conditions then obtaining in the region concerned, wearing hijab was recommended as a measure of social security for women and to facilitate their safe access to public domain. At the most the practice of wearing this apparel may have something to do with culture but certainly not with religion."

The bench said, "The region and the times from which Islam originated were not an exception. The era before the introduction of Islam is known as Jahiliya-a time of barbarism and ignorance. The Quran shows concern for the cases of 'molestation of innocent women' and therefore, it recommended wearing of this and other apparel as a measure of social security. Maybe in the course of time, some elements of religion permeated into this practice as ordinarily happens in any religion. However, that per se does not render the practice predominantly religious and much less essential to the Islamic faith."

Further it said, "Thus, it can be reasonably assumed that the practice of wearing hijab had a thick nexus to the socio-cultural conditions then prevalent in the region. The veil was a safe means for the women to leave the confines of their homes."

The court also remarked that, "What is not religiously made obligatory therefore cannot be made a quintessential aspect of the religion through public agitations or by the passionate arguments in courts."

The bench observed, "Whichever be the religion, whatever is stated in the scriptures, does not become per se mandatory in a wholesale way. That is how the concept of essential religious practice is coined. If everything were to be essential to the religion logically, this very concept would not have taken birth.

It observed, "It is on this premise the Apex Court in SHAYARA BANO, proscribed the 1400 year old pernicious practice of triple talaq in Islam. What is made recommendatory by the Holy Quran cannot be metamorphosed into mandatory dicta by a hadith which is treated as supplementary to the scripture. A contra argument offends the very logic of Islamic jurisprudence and normative hierarchy of sources."

Women not wearing hijab not sinners

"It can hardly be argued that hijab being a matter of attire, can be justifiably treated as fundamental to Islamic faith. It is not that if the alleged practice of wearing hijab is not adhered to, those not wearing hijab become the sinners, Islam loses its glory & it ceases to exist as a religion", the Court observed.

The Karnataka High Court chose not to follow the Kerala High Court judgment which declared hijab to be an essential practice in a case related to the dress code for All India Pre-Medical Test. The Court noted that the single judge of the Kerala High Court, Justice Muhamed Mustaque has acknowledged the difference of opinion regarding this practice.

"The learned Judge(of Kerala HC) himself in all grace states: "However, there is a possibility of having different views or opinions for the believers of the Islam based on Ijithihad (independent reasoning)", the High Court noted.

Petitioners failed to meet the threshold requirement of pleadings and proof as to wearing hijab is an inviolable religious practice in Islam.

The bench accepted the arguments of the state government that the Writ Petitions lack the essential averments. It said, "We have no affidavit before us sworn to by any Maulana explaining the implications of the suras quoted by the petitioners' side. Since how long all the petitioners have been wearing hijab is not specifically pleaded. The plea with regard to wearing of hijab before they joined this institution is militantly absent. No explanation is offered for giving an undertaking at the time of admission to the course that they would abide by school discipline."

Further it said, "There is absolutely no material placed on record to prima facie show that wearing of hijab is a part of an essential religious practice in Islam and that the petitioners have been wearing hijab from the beginning."

The court also opined that, "This apart, it can hardly be argued that hijab being a matter of attire, can be justifiably treated as fundamental to Islamic faith. It is not that if the alleged practice of wearing hijab is not adhered to, those not wearing hijab become the sinners, Islam loses its glory and it ceases to be a religion."