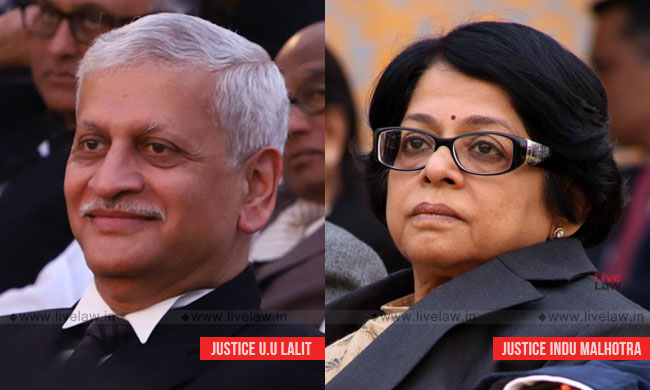 The Supreme Court has observed that a hospital is vicariously liable for the acts of negligence committed by the doctors engaged or empanelled to provide medical care. The bench of Justice Uday Umesh Lalit and Justice Indu Malhotra observed thus while upholding an NCDRC order holding a Hospital to be vicariously liable for medical negligence of the Doctors who allegedly failed to carry out...

The Supreme Court has observed that a hospital is vicariously liable for the acts of negligence committed by the doctors engaged or empanelled to provide medical care.

The bench of Justice Uday Umesh Lalit and Justice Indu Malhotra observed thus while upholding an NCDRC order holding a Hospital to be vicariously liable for medical negligence of the Doctors who allegedly failed to carry out the mandatory check up of Retinopathy of Prematurity of a pre-term baby, which led to his total blindness. (Maharaja Agrasen Hospital vs. Master Rishabh Sharma)

Referring to Bolam Test and other judgments on medical negligence, the Court observed that the reasonable standard of care for a premature baby mandates screening and checking up for ROP: It said:

Upholding the NCDRC findngs, the bench awarded a compensation of Rs. 76,00,000/- to the boy and the mother and issued directives on utilization of the amount. It further observed:

"It is common experience that when a patient goes to a hospital, he/she goes there on account of the reputation of the hospital, and with the hope that due and proper care will be taken by the hospital authorities. If the hospital fails to discharge their duties through their doctors, being employed on job basis or employed on contract basis, it is the hospital which has to justify the acts of commission or omission on behalf of their doctors"

Medical negligence comprises of the following constituents: (1) A legal duty to exercise due care on the part of the medical professional; (2) failure to inform the patient of the risks involved; (3) the patient suffers damage as a consequence of the undisclosed risk by the medical professional; (4) if the risk had been disclosed, the patient would have avoided the injury; (5) breach of the said duty would give rise to an actionable claim of negligence.
The cause of action for negligence arises only when damage occurs, since damage is a necessary ingredient of this tort. In a complaint of medical negligence, the burden is on the complainant to prove breach of duty, injury and causation. The injury must be sufficiently proximate to the medical practitioner's breach of duty. In the absence of evidence to the contrary adduced by the opposite party, an inference of causation may be drawn even though positive or scientific proof is lacking.
Medical negligence is the breach of a duty of care by an act of omission or commission by a medical professional of ordinary prudence. Actionable medical negligence is the neglect in exercising a reasonable degree of skill and knowledge to the patient, to whom he owes a duty of care, which has resulted in injury to such person. The standard to be applied for adjudging whether the medical professional charged has been negligent or not, in the performance of his duty, would be that of an ordinary competent person exercising ordinary skill in the profession. The law requires neither the very highest nor a very low degree of care and competence to adjudge whether the medical professional has been negligent in the treatment of the patient

The court also referred to evolution of law of Medical Negligence. It noted that, in Arun Kumar Manglik v. Chirayu Health and Medicare (P) Ltd, it was held that the standard of care as enunciated in Bolam (supra) must evolve in consonance with its subsequent interpretation adopted by English and Indian courts.