Article 370: How The Centre Demolished The Tunnel In One Stroke 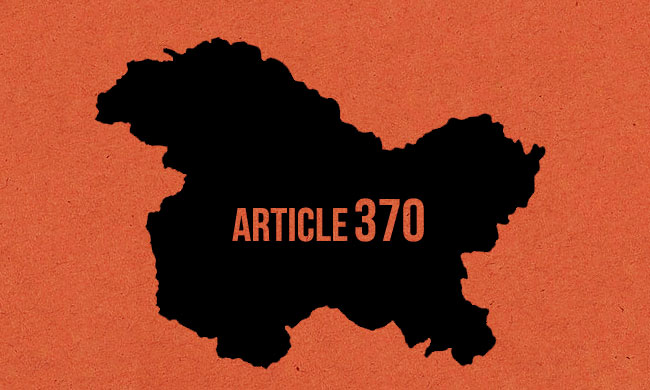 Gulzari Lal Nanda, who was India's interim prime minister twice, (once after the death of Jawaharlal Nehru and then after the demise of Lal Bahadur Shastri) was the Union home minister on December 4, 1964. He told the Lok Sabha then:

"The only way of taking the Constitution of India into Jammu and Kashmir is through the application of Article 370. It is a tunnel. It is through this tunnel that a good deal of traffic has already passed and more will." Nanda continued, throwing more light on the nature and scope of Article 370:

"What happens is that only the shell is there. Article 370, whether you keep it or not, has been completely emptied of its contents. Nothing has been left in it."

Since the Union Home Minister, Amit Shah, formally declared on Monday that Article 370 will cease to operate, a debate has ensued about the merits of declaring void a provision of the Constitution, which is already dead for all its practical purposes.

In the Supreme Court, the challenge to Article 370 of the Constitution, filed in the form of Special Leave Petition by Kumari Vijayalakshmi Jha in 2017, raised an interesting issue before the Court. Jha, whose prayer was first dismissed by the Delhi high court earlier, argued that Article 370 was a temporary provision which had lapsed with the dissolution of the J&K Constituent assembly on January 26, 1957. She also sought a declaration from the Supreme Court that the constitution of Jammu and Kashmir, in view of the lapsing of Article 370, was void, inoperative and ultra vires.

If what Jha claimed was correct, the Centre on Monday, appears to have scrapped a non-existent provision of the Constitution. The maximum life of Article 370, she claimed, was prescribed up to the existence/continuance of the Jammu and Kashmir Constituent assembly, and with Article 370 ceasing to exist, after the dissolution of the state constituent assembly, it requires a formal declaration from the Court to avoid any scope for ambiguity.

The Delhi high court relied on Supreme Court's judgment in State Bank of India v Santosh Gupta and another. [(2017)2SCC 538]. The judgment in this case, heard by the bench of Justice Kurian Joseph and Justice Rohinton Fali Nariman, was delivered on December 16, 2016, and authored by Justice Nariman.

The case included a few appeals arising out of a judgment delivered by the Jammu and Kashmir high court on July 16, 2015, in which it was held that various key provisions of the Securitisation and Reconstruction of Financial Assets and Enforcement of Security Interest Act, 2002 (SARFAESI) were outside the legislative competence of Parliament, as they would collide with Section 140 of the Transfer of Property Act of Jammu and Kashmir, 1920. The Supreme Court set aside the judgment of the high court, and allowed the appeals, holding that notices issued by banks in terms of Section 13 of SARFAESI and other coercive methods under that provision were validn and could be proceeded with further.

The bench then distinguished Article 370 from Article 369. The bench noted, that unlike Article 369, which is also a temporary provision limited in point of time to five years from the commencement of this Constitution, no such limit is to be found in Article 370. "Despite the fact that it is, therefore, stated to be temporary in nature, sub-clause (3) of Article 370 makes it clear that this article shall cease to be operative only from such date as the President may by public notification declare. And this cannot be done under the proviso to Article 370(3) unless there is a recommendation of the Constituent Assembly of the State so to do", the bench held.

The bench then relied on another "interesting" judgment of the Supreme Court in Sampat Prakash v the State of Jammu and Kashmir (1968) in which the petitioner challenged the validity of his detention without making a reference to the Advisory Board (within 60 days of the date of detention) as the President's power to do so under Article 370 ceased to exist after dissolution of the state Constituent assembly. The Constitution bench in this case repelled this argument for three reasons.

First and foremost, it was stated that the reason for Article 370's deemed continuance (beyond the dissolution of the state constituent assembly) was that it was necessary to empower the President to exercise his discretion from time to time in applying the Indian Constitution.

Second, Article 370 will cease to operate under sub-clause (3) only when a recommendation is made by the Constituent assembly of the state to that effect. It was found that in fact the constituent assembly of the state had made a recommendation that the article should be operative with one modification to be incorporated in the explanation to clause (1) of the Article, namely, that the Maharaja of Jammu and Kashmir be substituted by the expression "Sadar-I Riyasat of Jammu and Kashmir".

Also, it is important to note, the bench held, that Article 370(2) does not in any manner state that the Article shall cease on the completion of the work of the Constituent assembly or its dissolution. The constitution bench, therefore, held that though the marginal note refers to Article 370 as only a temporary provision, it is in fact in current usage and will continue to be in force until the specified event in sub-clause (3) of the said Article takes place.

It was further held by the Sampat Prakash Judgment that Section 21 of the General Clauses Act, 1897 was also applicable so that the power under this Article can be used from time to time to meet with varying circumstances. Section 21 of the GCA deals with power to issue, to include, add to, amend, vary or rescind notifications, orders, rules, or bye-laws. Under this section, where by any Central Act or Regulations a power to issue notifications, orders, rules or bye-laws is conferred, then that power includes a power, exercisable in the like manner and subject to the like sanction and conditions (if any), to add to, amend, vary or rescind any (notifications), orders, rules or bye-laws, so issued.