How To Become A Good Lawyer: 10 Tips From Senior Advocate Fali Nariman 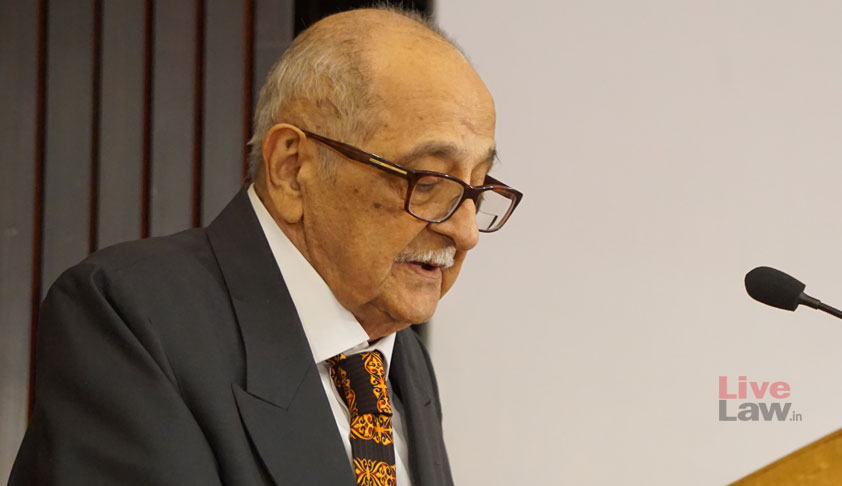 Senior Advocate Fali S Nariman on Thursday shared his wealth of knowledge on the topic "Becoming an Advocate" at the inaugural lecture of the online lecture series organised by Indian Law Institute, Kerala in association with LiveLaw.Through this lecture, the senior advocate extended important tips on the art of courtroom advocacy that would help young lawyers and law students to...

Senior Advocate Fali S Nariman on Thursday shared his wealth of knowledge on the topic "Becoming an Advocate" at the inaugural lecture of the online lecture series organised by Indian Law Institute, Kerala in association with LiveLaw.

Through this lecture, the senior advocate extended important tips on the art of courtroom advocacy that would help young lawyers and law students to establish themselves in the legal profession.

At the outset, Nariman emphasised that learning is an endless process in the field of law and that it is important for young lawyers to keep themselves on indian case laws at all times in order to be useful to their seniors. He further remarked that no one howsoever senior or advanced in knowledge or in age can ever say that he or she knows the law. It was highlighted that law is as 'vast and unfathomable' as the starry heavens in the sky that one sees on a clear night.

Proficiency in English is vital, important constitutional concepts are in English

Nariman stated that one has to have a good grasp on the English language in order to establish themselves as an advocate. This is because English is no longer a foreign language as it is one of the official languages of India. More importantly, he emphasised that the origins of Indian law remain in English and all important constitutional concepts such as liberty, equality and rule of law are all in English.

"This is not in order to make you anglicised, far from it, it is to give you an opportunity to establish yourself and be successful in the legal profession because the law in India is and will remain English in origin", the senior advocate further elucidated.

He further stated, "you must remember that English is not a foreign language, it is one of the two national (official) languages of India. Therefore, the first thing you must do is improve your knowledge and proficiency in English by reading. It is to give you an opportunity to establish yourself because the law in India is and will remain English in origin, all the great concepts are Anglo-Saxon."

The worst enemy of hard work is a fixed monetary reward

Nariman pointed out that the more one is engaged in work, the better is one's application of mind. However, 'work' here is not necessarily paid work, he clarified. He stated that a junior lawyer should not depend on fixed monetary compensation or stipend paid by the senior. "the worst enemy of hard work is a fixed monetary reward," he further stated.

"Of course, if it is necessary for your survival, take the stipend but don't depend on it forever because you are then you are in the position of an employee or an office clerk. You will soon begin to work less and less, only in office hours and then in company of other lawyers you will begin to complain how poorly you're paid", he added.

While assisting a senior or arguing a case, one must be aware of all facts of the case, Nariman highlighted. He also stated that it is also important to look up not only the relevant law but also law having some remote connection with the facts. Referring to Section 165 of the Indian Evidence Act, 1872 the senior counsel remarked,

"Although in a court of law only relevant facts are to be stated, there is one very important but least known section of the Indian Evidence Act which is Section 165 which reads as follows, the Judge may, in order to discover or to obtain proper proof of relevant facts, ask any question he pleases, in any form, at any time..and neither the parties nor their agents shall be entitled to make any objection to any such question or order, nor, without the leave of the Court."

A judge in a proceeding is expected to explore all avenues open to him or her in order to discover the truth, Nariman further elucidated.

Speaking about the ethical duty owed by lawyers to Court, Nariman emphasised that if a proposition has been previously adjudicated upon, it must be brought to the Court's attention even if goes against one's case.

"As a lawyer, it is your duty to bring to the notice of the court a case already decided on the point. You may then distinguish it but cite it you must. Never cite an overruled case," he stated.

Nariman further stated that in Court it is always better to understate one's case rather than overstate it. He also pointed out that the tone of a lawyer while advancing arguments plays a key role in deciding the strength of the contentions.

"Never exaggerate in Court. Argue in low key. Avoid rhetoric and don't be too smart and for God's sake, at this stage, avoid being funny in court! You will be stigmatised as flippant", he added.

He further emphasised that a lawyer must never display his anger inside a court room. "To lose your temper at a judge is losing half the battle in Court. If you have a temper and get upset at what the judge says, control your temper", Nariman highlighted.

Nariman also cautioned young lawyers from criticising a judge who may have delivered an unfavourable ruling. Learn to lose with dignity, he added.  He further stated that if at all a lawyer has to express his or her displeasure regarding a ruling, it must be shown in a court of appeal or in an open court.

"Don't jump to conclusions about the judge hearing your case. The entire edifice of our legal system exists on the basis of mutual good faith between the bench and bar.", Nariman stated further.

Exercise caution when speaking to media, unfair to judge who cannot retaliate

The senior counsel also urged lawyers to exercise caution when speaking to media. He stated that lawyers should never speak about a case to the media in which he/ she is appearing.

"It smacks of cheap publicity and is unfair to the judge. If the judgment needs to be criticised, such criticism will be appreciated when it comes from disinterested quarters," Nariman said.

Nariman also underscored that young advocates must refrain from complaining about the inadequacy in time allotted to them for arguments.

"When time for arguments is preset, do not argue with the judge because that is the discipline of the law", he stated.

He also favoured the imposition of time limits for arguments by Courts considering the impending backlog of cases. "We all object to time but just see the backlog of cases in our Courts. It is because we Advocates take so much of time in arguing cases", he added further.

"When an advocate speaks, he has to think about what he is going to say and say it precisely and with brevity. I have always noticed, the man who speaks less generally wins", Nariman elucidated further.

Advocacy plays a vital role, cases are not won merely on the basis of the strength of evidence

Nariman also highlighted that advocacy plays a vital role in winning a case as it goes a long way in persuading a judge.

"It is an illusion to think that great cases are won or lost because of the inherent strength of witness. Advocacy plays a vital role simply because the judge is also human like the advocate. The only difference is he or she is trained to control emotions better", Nariman underscored.