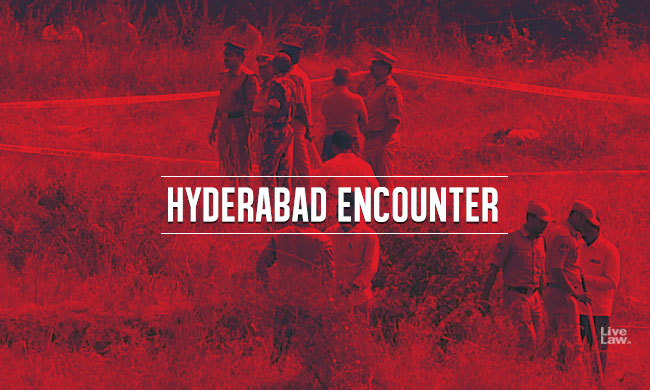 In an important development in the Hyderabad encounter case, the Supreme Court-appointed inquiry commission has refuted the claims of the Hyderabad police and concluded that the four accused were "deliberately fired upon by the police with an intent to cause their death" and with the knowledge that the firing would result in their death.

The Commission headed by former Supreme Court judge Justice VS Sirpurkar to inquiry into the alleged Hyderabad encounter killings of December 2019 has found that the suspects died due to the injuries caused by the bullets fired by the police party, and the police party did not fire in self- defence or in a bid to re-arrest the deceased suspects.

Today, the Supreme Court had allowed to make the Commission report public, rejecting the demand of the State of Telangana that it should be kept confidential in a sealed cover.

Apart from Justice Sirpurkar, the Commission comprised former Bombay HC judge Justice Rekha Baldota and former CBI Director Karthikeyan. The Commission was constituted by the Supreme Court in December 2019 to inquire in to the alleged encounter killings of 4 persons accused of gang-rape and murder of a veterinarian doctor., which had caused huge public outrage.

The Commission has opined that the entire version of the police party is "concocted" and therefore is unbelievable.

"After considering the entire material on record, we conclude that the deceased have not committed any offence in connection with the incident on 06.12.2019, like snatching the weapons, attempt to escape from the custody, assaulting and firing at the police party".

Notably, the Commission also said that they cannot take shelter under the exception of private defence.

"Just as Mob Lynching is unacceptable, so is any idea of instant justice. At any point of time Rule of Law must prevail. Punishment for crime has to be only by the procedure established by law", the Commission observed in the report.

The opinion recorded by the Commission is as follows :

A)Shaik Lal Madhar, Mohammed Sirajuddin and Kocherla Ravi are liable to be tried for the offence under Section 302 IPC. These officers cannot take shelter under Section 76 IPC and Exception 3 to Section 300 IPC because their contention that they fired in good faith at the deceased suspects has been disbelieved. Good faith, which is an essential pre-requisite of Section 76 IPC and Exception 3 to Section 300 IPC, is found to be clearly absent.

B) All the 10 police officers i.e., V. Surender, K. Narasimha Reddy, Shaik Lal Madhar, Mohammed Sirajuddin, Kocherla Ravi, K. Venkateshwarulu, S. Arvind Goud, D. Janakiram, R. Balu Rathod and D. Srikanth, are to be tried for the offences under Section 302 r/w 34 IPC, 201 r/w 302 IPC and 34 IPC, as the above discussion would show that the different acts committed by each of them were done in furtherance of common intention to kill the deceased suspects.

Police was responsible for safe keeping of the accused

Not possible for the deceased suspects to have operated the firearms: Commission

According to the Commission, contrary to what was claimed by the police, the deceased suspects could not have fired pistols and in fact did not fire the pistols.

According to the commission, once the accused escaped and started running, as alleged, it would be highly improbable that they would fire towards the police party while running as they would either run away or stand and fire at the police party.

The Commission has observed that even if the accused could operate the firearms, their aim would only be to escape and they would not stand and enter into an exchange of fire with the police.

Therefore, it has to be held that the deceased suspects could not have fired and run away simultaneously, the commission has said.

With regard to the State of Telangana's contention that all directions given by the Supreme Court in PUCL v. State of Maharashtra, with respect to encounter killings have been followed, the Commission has opined that the judgement has been followed in breach, and at best, there is only symbolic compliance.

Violation Of Constitutional & Statutory Rights Of Deceased: The Commission has stated constitutional and statutory rights of the deceased suspects at the time of their arrest and remand to judicial and police custody appear to have been violated.

The Commission has pointed out the following instances of violation of provisions of Code of Criminal Procedure, the NHRC Guidelines on arrest, the Telangana Police Manual and several Supreme Court judgments:

The Commission has also stated that the statutory provisions required to be complied at the time of the remand to judicial custody of the deceased suspects had been violated.

Further, irregularities pertaining to the conduct of medical examination of the deceased and serious violations of law at the time of granting police custody by the Judicial Magistrate have also been found.