'I Apologize A Hundred Times' : Justice Arun Mishra On His Comments Against Gopal Sankaranarayanan 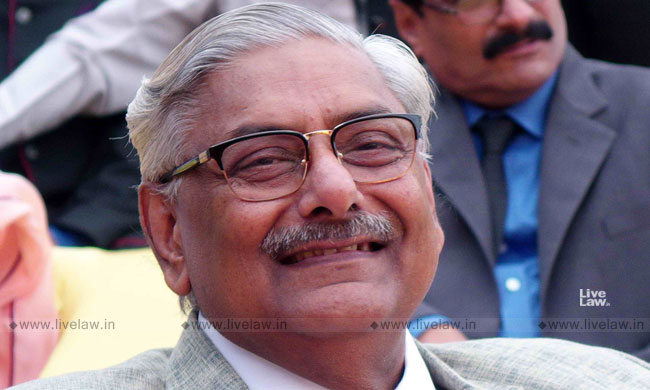 Seeking to douse the friction between the bench and the bar, Supreme Court judge Justice Arun Mishra on Thursday expressed regret for his outburst at a senior lawyer during a court hearing."If anyone feels hurt, an animal or a tree even, am ready to apologise. I know you're not seeking an apology but I do apologise to any living creature if I had caused any harm. Gopal Sankaranarayan...

Seeking to douse the friction between the bench and the bar,  Supreme Court judge Justice Arun Mishra on Thursday expressed regret for his outburst at a senior lawyer during a court hearing.

"If anyone feels hurt, an animal or a tree even, am ready to apologise. I know you're not seeking an apology but I do apologise to any living creature if I had caused any harm. Gopal Sankaranarayan is half of our age. Even to those much younger, I apologise a hundred times", Justice Mishra said in open court room.

"I feel though that I have been targeted unnecessarily by some people and the media. I am under severe pressure. I deal with several matters. It is possible that I may have said something out of pressure"

This is in the context of Justice Mishra attempting to shut down Senior Advocate Gopal Sankaranarayanan with threat of contempt action during the hearing of Indore Development Authority case. This incident snowballed into a major controversy with the Executive Committee of Supreme Court Advocates on Record Association (SCAORA) passing a resolution condemning Justice Mishra's action and urging him to be "little more patient in dealing with lawyers".

Today morning, a group of Senior Advocates were present in Court room number 3, which is presided by Justice Mishra.

Senior Advocate Kapil Sibal said that the bar and the bench must be protected from a 'discourteous environment'.

"A discourteous environment is not wanted. Do be a little patient. It was a cumulative outburst. We aren't antagonistic. We only request to keep exchanges courteous", Senior Advocate Sibal said.

This was followed by Senior Advocate Dr A M Singhvi, who said "our effort is only to ensure that your Lordships understand our message".

At this juncture, Justice M R Shah suggested that there should be mutual respect. "Everything must be mutual. It happened from the other side too. I cannot say what he did. But we had sent word but he refused to make submissions", Justice Shah commented on Tuesday's happenings involving Senior Advocate Gopal Sankaaranarayanan.

Then Sibal mentioned that it was an outcome of "cumulative incidents and not just one".

Former Attorney General and Senior Advocate Mukul Rohatgi then said " Many fear appearing before this court. An atmosphere is created, which affects junior members who assist us as well. What is important is that institution should remain".

Justice Shah then said that Justice Mishra wished to say something and he began to talk.

Justice Mishra said that he has long association with the bar, which he respects like his mother. After expressing his apology for the incidents of Tuesday, Justice Mishra hinted hat some amount of blame lay with the bar as well.

"We may go wrong at times. But not always. Arrogance is increasing in the Bar. It'll be the end if proper behaviour is lacking on both sides. We are friends.

Our tolerance must not be construed as weakness. With such attacks, thinking straight and taking decisions becomes difficult", he said.

Justice Mishra then suggested that Senior Advocate Gopal Sankaranarayanan may have exceeded the limits.

"We tried to console him, have him lengthy hearing, but he projected as if he wasn't heard. We just told him to not argue certain points. When 5 judges call, he must come. He was arguing very well but unnecessarily naming judges".

Justice Mishra also reminded that he gave a patient hearing for the request for his recusal from the Constitution Bench hearing the land acquisition matters.

At the end, Justice Mishra reiterated his apology.

" I apologize with folded hands. I can die for the bar, which has given me more respect than judiciary".

On Tuesday, Justice Arun Mishra told Senior Advocate Gopal Sankaranarayan that his arguments in the case concerning interpretation of Section 24 of the RFCTLARR Act were repetitive and threatened him with contempt if he persisted with the submissions.

"You are making a mockery of the justice delivery system! We are hearing patiently. And You are commenting on every query? Retorting on every query? If you make one more retort and I will take contempt against you and make sure it is seen through!...Now If you have any new points, you may only make them!", Justice Mishra told the Senior Advocate.

At this point, Mr. Sankaranarayanan excused himself from the hearing and left the Court room.

"Several members of the bar have repeatedly been raising such grievance about the unwarranted treatment and passing personal remarks by Hon'ble Justice Arun Mishra.

We request Hon'ble Justice Arun Mishra to be little more patient in dealing with lawyers."

Following this, the Chairman of Bar Council of India, Senior Advocate Manan Kumar Mishra issued a statement disapproving the SCAORA resolution and stating that the judge was being targeted by a few members of the bar.