"If A Co-operative Society Is Being Mismanaged, Should the RBI be A Mute Spectator":Senior Advocate Shekhar Naphade 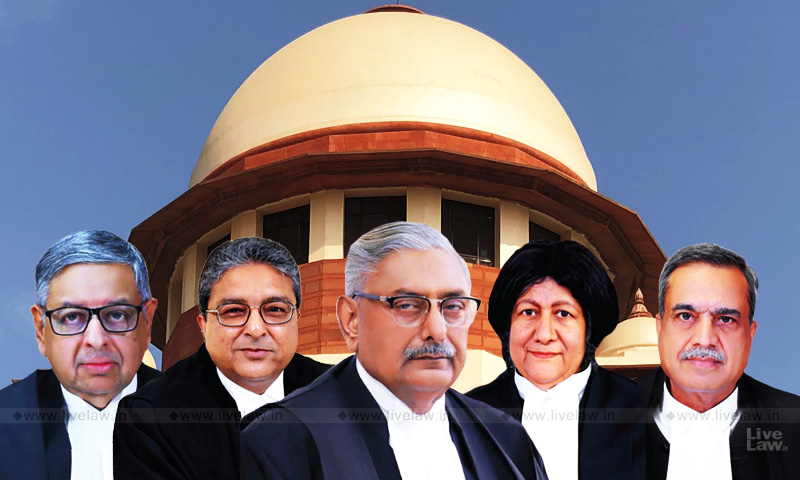 The Five Judge Constitution Bench headed by Justice Arun Mishra reserved its judgment on the question of applicability of The Securitisation and Reconstruction of Financial Assets and Enforcement of Securities Interest Act, 2002 on Co-operative Societies/Banks.A three judge bench, referred this matter to constitution bench noticing the conflicting decisions in Greater Bombay Coop. Bank Ltd....

The Five Judge Constitution Bench headed by Justice Arun Mishra reserved its judgment on the question of applicability of The Securitisation and Reconstruction of Financial Assets and Enforcement of Securities Interest Act, 2002 on Co-operative Societies/Banks.

A three judge bench, referred this matter to constitution bench noticing the conflicting decisions in Greater Bombay Coop. Bank Ltd. vs. United Yarn Tex (P) Ltd. and others [(2007) 6 SCC 236] and the earlier pronouncements of this Court in Delhi Cloth & General Mills Co. Ltd. vs. Union of India [(1983) 4 SCC 1666], T. Velayudhan vs. Union of India [(1993) 2 SCC 582] and Union of India vs. Delhi High Court Bar Association [(2002) 4 SCC 275]. These judgments relate to the scope of the legislative fields covered by Entry 45 of List I and Entry 32 of List II of the Seventh Schedule.

"These days Cooperative Societies are backed by powerful political persons. Look what happened in Maharashtra, BMC...If a Cooperative Society is being mismanaged, should the RBI be a mute spectator?", began Senior Advocate Shekhar Naphade on Thursday, on behalf of a multi-state cooperative bank.

"For that the Registrar of Cooperative Societies is there" remarked Justice Aniruddha Bose.

"Just because the law is not taking its course, somebody else should take over?" commented Justice Vineet Saran.

The discussion was centred on 2007 ruling in Greater Bombay.

"Greater Bombay does not consider the definition in 56(a) of BR Act", intervened SG Tushar Mehta.

At this point, Justice Mishra pointed out two excerpts from this judgment- "The object was not to define a co-operative bank to mean a banking company, in terms of Section 5 (c) of the BR Act" and "The primary object or principal business of the 'Co-operative Bank' should be the transaction of banking business"

"If the primary business is banking, then it will be a Cooperative Bank. The primary transaction of the Cooperative Society has to be banking business. This functional test of a bank would be a question of facts. If it is involved in banking only, then it is a Bank", observed Justice Mishra.

"The emphasis is on limited commercial function. If limited is taken away, then it is a corporate Bank." noted Justice MR Shah.

"This would be re- writing of section 56 (of BR Act)" encountered the SG.

"Entry 32 of list II is without the functional test. But here banking is also an activity. Now on the aspects theory, aspects in 45 will be the exclusive jurisdiction of the Central Government... because otherwise Cooperative Societies are Cooperative Societies. As compared to Corporate Banks, there is limited commercial activity. This is the only way to ensure that there is no overlapping." opined Justice Mishra.

"I get a license from RBI if only my primary function is banking. I cannot get a license unless I follow the procedure in Section 22 of BR Act." argued the SG.

Indicating section 6 of the BR Act and requesting the Bench to read 'Banking Company' as 'Cooperative Society', the SG advanced, "the law provides when I am essentially doing banking business, additionally I can do these things also."

"No. Section 22 of the BR Act is why the functional test fails. If I am doing 80% something else and 20% of lending etc, I will not get license" suggested the SG.

"In addition to banking business, you can do this, this, this. Like lawyers are permitted to do other things part- time like writing articles, teaching etc" noted Justice Mishra.

"You have to cross the threshold that essentially you are doing banking, then you can do activities analogous to it (Section 6)" agreed the SG.

"Like law graduates are lawyers. Additionally, you may or may not do anything else... 6 is also illustrative" added Justice Saran.

"The functional test has to be carried out by whom? Who decides I am doing banking? Once I get the license from RBI, the only question that remains is whether the SARFAESI applies or not" continued the SG.

"If you have limited commercial activity as compared to commercial banks, then are you out of List I? That is the question", ventured Justice Mishra.

"If I do any other commercial activity, my license will be cancelled" replied Mr. Mehta.

"So I will collect money under 45 but when it comes to recovery, I will forfeit and go out of it. It is like a dishonest child, when it comes to feeding, he is there" articulated Justice Mishra.