If Rule Of Law Is Not Present In Any Nation Anarchy Reigns: Chief Justice NV Ramana 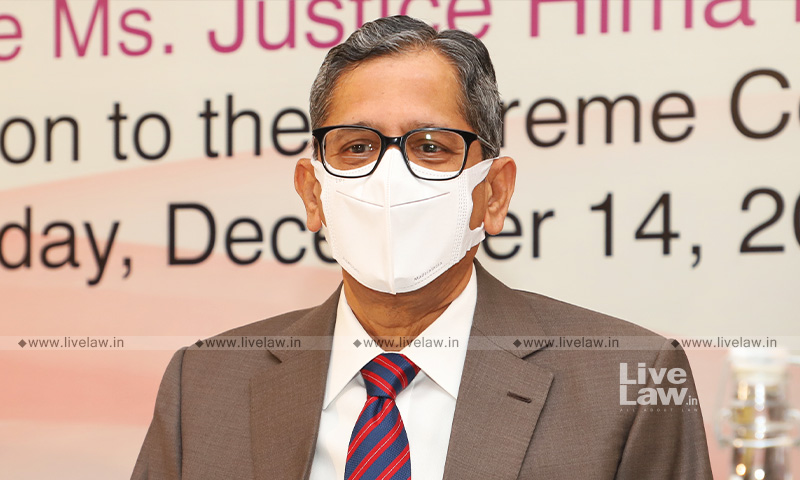 Speaking at an event where he was conferred with a Lifetime Achievement Award by the Rotary Club of Vijayawada Chief Justice N.V.Ramana spoke about the importance of Rule of Law in a democracy.CJI said that the Rule of Law is fundamental for democracy and urged lawyers, judges, and other members of the audience to educate people on its importance. "If Rule of Law is not present in...

Speaking at an event where he was conferred with a Lifetime Achievement Award by the Rotary Club of Vijayawada Chief Justice N.V.Ramana spoke about the importance of Rule of Law in a democracy.

CJI said that the Rule of Law is fundamental for democracy and urged lawyers, judges, and other members of the audience to educate people on its importance.

CJI Ramana also spoke about the importance of Art.21 and Art.19 of the Constitution. He said:

"Art.21 and Art.19 lie at the heart of the Constitution and any violation of these rights should be a matter of concern of every person. Not just the courts and lawyers even common citizens should ask questions about these issues."

CJI Ramana expressed that he felt a sense of satisfaction to see constitution and constitutional issues being talked by common people. Speaking about the importance of knowledge of the Constitution permeating average citizenry, he said:

"Particularly, in this nation where people don't enjoy their fundamental freedoms, suffer from illnesses, unemployment, superstitions…if there are to be eradicated there must be a change in consciousness of citizenry that will come by way of awareness of their fundamental rights. They need to be educated and made aware of their rights and duties."

CJI also spoke on the urgent need to make the law, courts and procedures accessible and comprehensible to the people. He added that there was a need to "Indianise the judiciary." Elaborating on this thought, he stated:

"If the common citizen has to understand the system it should be comprehensible. The courts and law should not be like Vedas.. beyond the comprehension of the common citizen. There's an urgent need for simplification of the laws and procedures. Only then will we be able to get closer to the average citizen...If people come to courts and have to deal with incomprehensible language and procedures they will get scared and would not enjoy knocking the door of courts. We need to think of alternative resolution mechanisms."

CJI Ramana added in jest, that he did not imply extra-legal 'alternate dispute resolution methods. Emphasizing the need to simplify existing systems in place, CJI Ramana said that "when a person comes to court they should be able to understand what is happening in their case."

Speaking on the expectations of the average citizens to get justice and the role of courts, CJI added that the duty to deliver justice doesn't fall only on the courts
"Justice can be delivered by anyone. According to the Constitution, the duty to deliver justice also falls on the government….if all organs perform their duties properly there is no need for people to come to courts. Of course courts will come to the service of people when their rights are violated. But if all three organs perform their duties within the limits laid down by the Constitution, there would be no need for people to knock the doors of courts."

Delivering his acceptance speech in his mother tongue Telugu, CJI Ramana also stressed the need for people to speak, think, read and write in their mother tongues as it aided in the intellectual growth of the person and keep the rich heritage of languages alive.