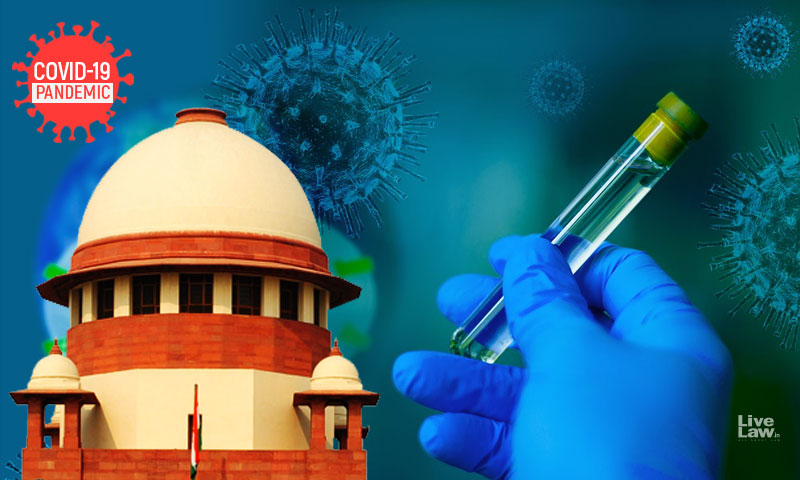 A letter has been written to Chief Justice SA Bobde seeking immediate intervention of the Court for staying the COVID19 community survey which is to begin in the State of Goa on April 13, 2020.The plea highlights the basis of urgency and lays down that putting off the issue for even one day shall put the entire community at risk as the survey is "ill-advised" and...

A letter has been written to Chief Justice SA Bobde seeking immediate intervention of the Court for staying the COVID19 community survey which is to begin in the State of Goa on April 13, 2020.

The plea highlights the basis of urgency and lays down that putting off the issue for even one day shall put the entire community at risk as the survey is "ill-advised" and "inadequately planned".

The Petitioner has prayed for an injunction in this regard on Sunday itself, as a similar petition, filed by Mr. Dattatreya Naik of Goa Seondary Teachers Assocaition in the High Court Of Goa has been delayed to Monday, April 13, 2020, which, accordingly shall be the day the State Government begins COVID Community testing.

"We pray that urgent orders may be passed in the matter, as this Hon'ble Supreme Court sees fit on Sunday, April 12, 2020, as the Hon'ble High Court of Goa has delayed the hearing of the matter to Monday, April 13, 2020, by which time it will already be too late to protect the citizens of Goa, particularly the elderly and infirm of health as the potentially calamitous survey will have already begun for 700,000 households!" - the petitioners state.

"We are compelled to bring to Your Lordship's attention the fact that the State Government of Goa will be carrying out an ill-advised Covid-19 community survey in the State from Monday the 13th of April, 2020 to April 15, 2020, which is why we are writing to you to intervene as a matter of emergency on Sunday April 12, 2020. Even a day's delay in this matter would risk exposing lakhs of vulnerable Goans to new chains of contagion via the inadequately planned government survey"- the letter states.

Petitioners have averred that the State Government's orders for door-to-door testing for detecting those denizens of the State who are infected by the novel coronavirus shall put Goans at immense risk as firstly, those delegated with the task are non-health department Government Servants such as teachers, anganwadi workers, meter readers and other Government employees, who number approximately 7000 individuals.

Secondly, the letter suggests that these workers were not extensively trained to neither detect the deadly virus nor to protect themselves in the process & their training did not encompass social distancing norms, which is another glaring shortcoming. The order therefore fails to take into account the possibility of exposure of the infection to lakhs of citizens, the petitioners contend.

"...... it has been reported that social distancing norms were not followed by the State Government at their training session on April 9, 2020, which puts into question whether they themselves will prove to be asymptomatic carriers of the virus, because of the State Government's negligence in this respect. Since no testing was undertaken before the training at various locations in Goa, it is too high a risk to allow for potentially asymptomatic carriers to survey Goans on their doorsteps"

Further to this, petitioners contend that delegates who have been assigned the task have already expressed "dismay" and "deep concern" at the lack of protective suits and have stated that they are only being equipped with simple masks & hand sanitisers. The letter states further puts forth that no gaurantee has been given to the surveyors that that they will be protected by law and order personnel while they go door-to-door.

"Not only are they being put in danger and being left uninsured for this task by the State Government, there is a real risk that these 7000 surveyors may infect lakhs of citizens in the course of their duty. Your Lordship is most likely aware that even medical doctors in Goa are complaining about the acute shortfall in PPE" - the letter reads.

Emphasising on the widsedpread disaproval expressed by residents in the State, the petitioner has prayed that the CJI direct for an immediate halt to the survey and only allow it, if neccesary in areas which are designated as "hotspots" in Goa. Further, the letter also seeks that the CJI personally oversee such a survey and make sure all surveyors are properly equipped, trained & tested for virus beforehand themselves.

On April 7, 2020, the Goa government announced a community door-to-door survey to be completed in three days in the wake of the coronavirus outbreak. "Around 7,000 enumerators will be involved in surveying people across the state for flu-like symptoms and travel histories", Goa Chief Minister Pramod  Sawant had announced.