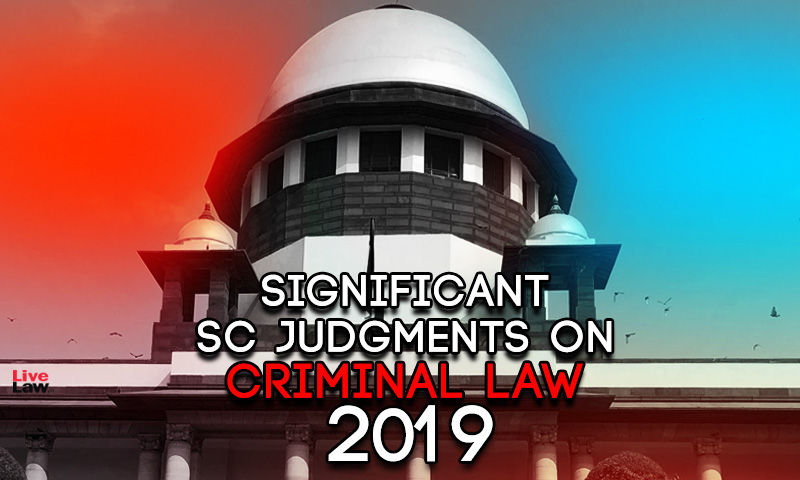 Vinubhai Haribhai Malaviya and others v The State of Gujarat

A three judge bench of the Supreme Court virtually overruled a 43 year old precedent and held that Magistrate can invoke power under section 156(3) of the Code of Criminal Procedure even at post-cognizance stage. The bench headed by Justice RF Nariman held that this judgment was rendered without adverting to the definition of "investigation" in Section 2(h) of the CrPC. It was observed that the finding in law in the said judgment that the power under Section 156(3) CrPC can only be exercised at the pre-cognizance stage is erroneous.

Acquittal If IO & Informant Same Person: Benefit Of 'Mohan Lal' Judgment Not Available To Cases Prior To It

In an important judgment, the Supreme Court observed that all pending criminal prosecutions, trials and appeals prior to the law laid down in the judgment in Mohan Lal vs. State of Punjab (acquittal if investigator-informant is the same person), shall continue to be governed by the individual facts of the case.

Later, a two judge bench expressed its disagreement with the view taken by a three-judge bench in Mohan Lal vs. State of Punjab where it held that that the accused is entitled to acquittal if informant and the investigator in NDPS cases is the same person. The matter was therefore referred to larger bench. A Constitution Bench headed by Justice Arun Mishra is considering the matter at present.

Answering a reference pending for about seven years, the Supreme Court held that the courts at the place where the wife takes shelter after leaving or driven away from the matrimonial home on account of acts of cruelty committed by the husband or his relatives, would, dependent on the factual situation, also have jurisdiction to entertain a complaint alleging commission of offences under Section 498A of the Indian Penal Code

In a significant ruling, the Supreme Court held that a judicial magistrate can direct an accused to provide his voice samples for investigation even without his consent. The three-judges bench led by the CJI thus settled the confusion which arose out of the split verdict in the 2012 verdict by a two judges bench.

Section 143A NI Act On Interim Compensation Has No Retrospective Application

Settling a confusion in prosecution of cheque bounce cases, the Supreme Court held that Section 143A of the Negotiable Instruments Act on payment of interim compensation to the complainant during the pendency of the case has no retrospective application.

The Supreme Court held that police does not have the power to attach immovable property during investigation under Section 102 of the Code of Criminal Procedure. The judgment was delivered by the bench comprising CJI Ranjan Gogoi, Justices Deepak Gupta and Sanjiv Khanna. However, police does have authority to freeze moveable properties of the accused, clarified the bench. The Supreme Court held that the expression 'any property' appearing in Section 102 of the Code of Criminal Procedure would not include 'immovable property'. The bench comprising Chief Justice Ranjan Gogoi, Justice Deepak Gupta and Justice Sanjiv Khanna observed thus while holding that a power of a police officer under Section 102 of the Criminal Procedure Code to seize any property, which may be found under circumstances that create suspicion of the commission of any offence, would not include the power to attach, seize and seal an immovable property.

Federation of Obstetrics and Gynecological Societies of India V. Union of India

The Supreme Court upheld the Constitutional Validity of Sections 23(1) and 23(2) of the Pre-conception and Pre-natal Diagnostic Techniques (Prohibition of Sex Selection) Act, 1994 . Dismissing a writ petition filed by Federation of Obstetrics and Gynecological Societies of India (FOGSI), the bench comprising Justice Arun Mishra and Justice Vineet Saran observed that dilution of the provisions of the Act or the Rules would only defeat the purpose of the Act to prevent female foeticide, and relegate the right to life of the girl child under Article 21 of the Constitution, to a mere formality.

The Supreme Court held that a male aged between 18 and 21 years, who contracts into a marriage with a female adult, cannot be punished under Section 9 of Prohibition of Child Marriage Act, 2006.

The Supreme Court observed that, though the Magistrate is not bound to grant permission to a victim to conduct prosecution at the mere asking but the victim has a right to assist the Court in a trial before the Magistrate. The bench comprising of Justice L. Nageswara Rao and Justice Hemant Gupta observed that if the magistrate is satisfied that the victim is in a position to assist the Court and the trial does not involve such complexities which cannot be handled by the victim, he/she would be within its jurisdiction to grant of permission to the victim to take over the inquiry of the pendency before the Magistrate.

Section 207 CrPC: Magistrate Cannot Withhold Any Document Submitted Along With Police Report Except When It Is Voluminous

The Supreme Court observed that a Magistrate cannot withhold any "document" submitted by the investigating officer along with the police report except when it is voluminous. Further, in case of voluminous documents, the accused can be permitted to take inspection of the concerned document either personally or through his pleader in Court, the bench of Justice AM Khanwilkar and Justice Dinesh Maheshwari.

The Supreme Court observed that a preliminary inquiry before registration of First Information Report (FIR) is not required to be mandatorily conducted in all corruption cases. It said that the judgment in Lalita Kumari does not state that proceedings cannot be initiated against an accused without conducting a preliminary inquiry

COFEPOSA: Detention Order Can Be Passed Even If A Person Is In Judicial Custody

The Supreme Court observed that even if a person is in judicial custody, he can be detained Detention Laws like COFEPOSA. The Court further noted that the detenus were granted bail by the Court on the very date the orders of detention were quashed by the High Court. Therefore, the apprehension in the mind of the Detaining Authority that the detenus are likely to be released on bail was well founded and fortified, said the bench while setting aside the High Court order.

Wife Divorced By Husband On Ground Of Desertion Entitled To Maintenance

The Supreme Court observed that a wife, who has been divorced by the husband, on the ground that the wife has deserted him, is entitled to claim maintenance under Section 125 of the Code of Criminal Procedure. The bench comprising Justice Deepak Gupta and Justice Aniruddha Bose, refusing the plea to refer this issue to a larger bench, observed that this view has been consistently taken by the Supreme Court and is in line with both the letter and spirit of the Criminal Procedure Code.

The Supreme Court observed that road traffic offences can be prosecuted under Motor Vehicles Act as well as Indian Penal Code. The bench comprising Justice Indu Malhotra and Justice Khanna observed thus while setting aside the direction issued by the Gauhati High Court to States of Assam, Nagaland, Meghalaya, Manipur, Tripura, Mizoram and Arunachal Pradesh that road traffic offences shall be dealt with only under the provisions of the Motor Vehicles Act and not under the provisions of Indian Penal Code.

Raj Kumar vs. State of UP

The Supreme Court observed that if the standards prescribed under Prevention of Food Adulteration Act, are not complied with, the accused charged with adulteration cannot be acquitted only on the ground that the deficiency is marginal.

The Supreme Court held that an FIR with respect to commission of an offence under Terrorist and Disruptive Activities (Prevention) Act cannot be recorded by the police under Section 154 CrPC without sanction of the competent authority. The bar under Section 20-A(1) of TADA Act applies to information recorded under Section 154 of CrPC, the bench comprising Justice Deepak Gupta and Justice Aniruddha Bose held while discharging an accused.

State Of Punjab vs. Baljinder Singh

The Supreme Court observed that merely because there was non-compliance of Section 50 of the Narcotic and Drugs and Psychotropic Substances Act as far as "personal search" of the accused was concerned, no benefit can be extended so as to invalidate the effect of recovery from the search of the vehicle. The bench comprising Justice Uday Umesh Lalit, Justice Indu Malhotra and Justice Krishna Murari observed that the mandate of Section 50 of the NDPS Act is confined to "personal search" and not to search of a vehicle or a container or premises.

Accused X vs. State of Maharashtra

Anokhilal vs. State of Madhya Pradesh

The Supreme Court issued guidelines in the matter of appointment of amicus curiae to defend the accused in serious criminal cases.

i) In all cases where there is a possibility of life sentence or death sentence, learned Advocates who have put in minimum of 10 years practice at the Bar alone be considered to be appointed as Amicus Curiae or through legal services to represent an accused.

ii) In all matters dealt with by the High Court concerning confirmation of death sentence, Senior Advocates of the Court must first be considered to be appointed as Amicus Curiae.

iii) Whenever any learned counsel is appointed as Amicus Curiae, some reasonable time may be provided to enable the counsel to prepare the matter. There cannot be any hard and fast rule in that behalf. However, a minimum of seven days' time may normally be considered to be appropriate and adequate.

iv) Any learned counsel, who is appointed as Amicus Curiae on behalf of the accused must normally be granted to have meetings and discussion with the concerned accused.

The Supreme Court has observed that the High Court has inherent power under Section 482 of the Code of Criminal Procedure to recall an order and the provisions of Section 362 Cr.P.C. would not bar it from exercise of such powers.

Right To Get Sample Tested Also Available To Vendor Of Misbranded Food Article When Its Testing Is Integral To Prove The Offence:

The Supreme Court  observed that, where examination of the contents/ingredients of the food article is integral to proving the offence 'misbranding', the procedure prescribed under Sections 11-­13 of the Prevention of Food Adulteration Act has to be complied with, regardless of whether 'adulteration' is alleged or not.

Karnataka State Pollution Control Board vs. B. Heera Naik

The Supreme Court observed that Body Corporate like City Municipal Council and Corporation can be prosecuted under Section 47 of the Water (Prevention and Control of Pollution) Act, 1974. In this case, the Karnataka High Court had quashed the complaint filed by Karnataka State Pollution Control Board on the ground that Commissioner of Municipal Council, Chief Officer or Council cannot be termed as Head of the Department and they cannot be prosecuted under Section 48 of the Act, 1974

The Supreme Court observed that, though a victim can engage a private counsel to assist the prosecution, such counsel could not be given the right to make oral arguments or examine and cross-examine witnesses. The bench of Justice Mohan M. Shanthanagoudar and Justice Deepak Gupta observed thus while upholding the Calcutta High Court judgment dismissing the application made by a victim in a criminal case seeking permission for her counsel to cross-examine witnesses after the Public Prosecutor.

Union of India vs. State of Maharashtra

A three judge bench of the Supreme Court consisting of Justices Arun Mishra, M R Shah and B R Gavai allowed Centre's petition seeking review of its March 20, 2018 judgement which had virtually diluted provisions of arrest under the SC/ST Act. The March 20 judgment had held that arrest of a public servant under SC/ST Act should be after approval of the appointing authority and of a non-public servant after approval of the SSP and that a preliminary enquiry must be held by the DSP to see whether the allegations make out a case under SC/ST Act.