"Arbitrariness Was Writ Large On Imposition of Lockdown & Should Have Been Stayed By SC Next Morning": Senior Advocate Dushyant Dave 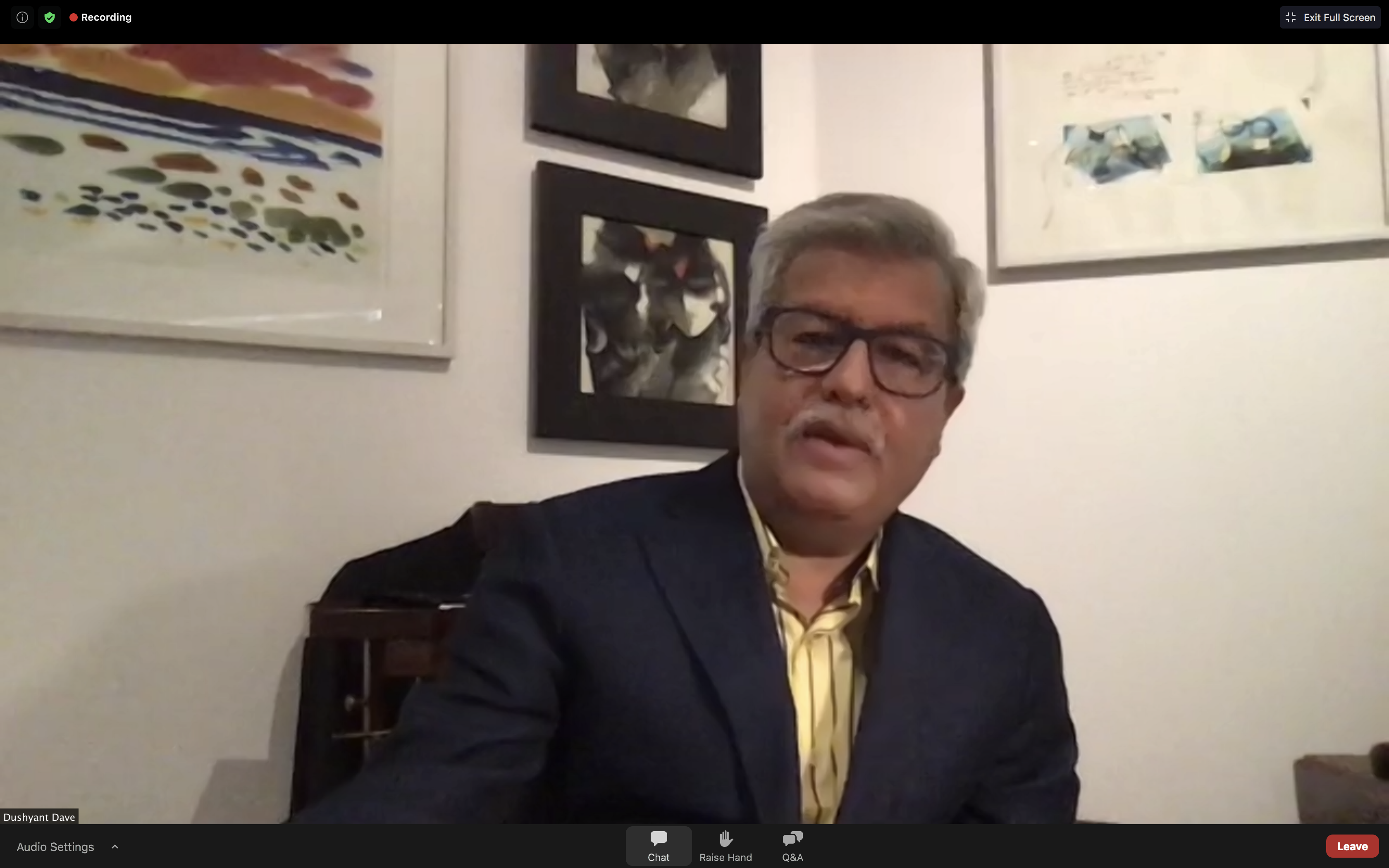 The National Law University, Delhi (NLUD) on Friday organised a webinar on the topic "Supreme Court and the Pandemic: A Conversation with Mr. Dushyant Dave".The session which lasted for an hour encompassed around facets of a variety of issues surrounding the Top Court during the unprecedented Coronavirus crisis.The webinar was organised by the faculty and students of NLUD and moderator Mr....

The National Law University, Delhi (NLUD) on Friday organised a webinar on the topic "Supreme Court and the Pandemic: A Conversation with Mr. Dushyant Dave".

The session which lasted for an hour encompassed around facets of a variety of issues surrounding the Top Court during the unprecedented Coronavirus crisis.

The webinar was organised by the faculty and students of NLUD and moderator Mr. Anant commenced the session by asking Senior Advocate Dushyant Dave on the insinuations of Supreme Court and its pro-activeness or lack thereof viz. the pandemic and the subsequent migrant crisis.

Mr. Dave answered by first putting a question to his virtual audience. He said "Restraint or Abdication by the SC on the migrants issue? Would like to know your views. Do send your views towards the end of the session."

Then, he began elaborating on his own view regarding the Supreme Court's approach in context of  Article 13(2) of the Constitution.

"Any executive order which is in contravention of Fundamental rights is void ab initio. The question is, are all actions by government in consonance with constitutional tenets?"

Elaborating on the fallacy of Constitutional rights without consonant remedies, Dave referred to the Constituent Assembly Debates of 1947 which eventually led to the advent of Article 32 of the Constitution under the aegis of Dr. BR Ambedkar.

"Dr. Ambedkar said that the Constitution is a fundamental document which creates organs and puts limitations on powers and the Judiciary must keep a check on Executive"

He added that in today's time, however, the executive heavily dominates the Judiciary, even though precedents are replete with exercise of Judicial Review so to uphold Constitutional values.

He then stated that the absence of exercise of fundamental duty of judicial review by the Judiciary, in fact led to abdication.

Further, Dave elaborated on the lack of pro-activeness by the judiciary in preventing the loss that arose due to imposition of the nation-wide lockdown. Calling it an outrightly unplanned decision by the Prime Minister and his council of ministers, he stated that he was acting on advisory of the short-sighted ministers.

"PM's lockdown began with a prior notice of only 4 hours. You cannot in a country like India declare lockdown by giving a 4 hour notice. This arbitrariness was writ large. The Thaali-banging of Janta Curfew was quite hilarious. Many people suffering due to lockdown. Numbers of people losing out on livelihood are large. The imposition of lockdown in a country like India was extremely arbitrary" - Dave

Apropos this, he stated that the Supreme Court should have stayed the decision of the lockdown, immediately the morning after it was announced, at least for a week - so as to equip people and get them ready for this disastrous and unprecedented time. Not doing so, Dave said, led to a complete disregard to democratic principles.

Dave: We have all seen our brothers and sisters suffering. Is this how a democracy functions? To make our people cycle and walk for 100's of 1000's of kilometers? I think not. We are not in a dictatorship, we are in a democracy.

Next, Dave elaborated on the lack of a national plan by the Government in combating the pandemic situation, which should have been formulated by taking into account myriad of views and people from all walks of life in the country. This would have created a robust plan, he said.

Addressing the orders passed by the supreme court in its suo motu case registered to take into account the problems and miseries of migrant workers as "toothless" and "tokenism", he stated that the situation would have been tackled much more efficiently by the judiciary of the 1970's.

Further, Dave said that today's judges of top court call the PM as their hero and on that note, quoted Dr. BR Ambedkar in his last speech to the Constituent Assembly of India,

"Bhakti in religion may be a road to the salvation of the soul. But in politics, Bhakti or hero-worship is a sure road to degradation and to eventual dictatorship."

Thus, the present scenario of Judges engaging in Bhakti of the PM led to abdication.

Dave also addressed the issue of Article 370 which is still pending adjudication before the top court. He said that Top Court has been sitting on the issue for months but chose to take up the Ayodhya case. He said that even though he is a religious man himself, he fails to see how the construction of a temple can take precedence over more pressing issues such as Habeas Corpus petitions or the Article 370 issue.

Dave: If surveys were taken as they are taken in the United States, it would come to the fore that an overwhelming majority of Indians would say that the Judiciary has abdicated them.

On the aspect of whether the PMCARES Fund should come under the aegis and scrutiny of the RTI Act, 2005, Dave insisted that not doing so would lead to an outright "fraud on our constitution".

Dave spoke on the role of judges and judiciary today in comparison with the Indira Regime. He said that a democracy loses its sheen when there is a landslide victory of a party.

Dave: Will India lose its democracy again? Ambedkar was asked. He had said, It may, if theres a landslide, it may lose democracy in fact BUT retain it in form. That happened during the Indira regime and its happening now.

Further to this, Dave also highlighted that PIL's play an important role in democratic processes but they surely are certain "ambushed" proceedings that are filed, he added.

On the question of whether the Registry gives preferences to the rich and influential for listings, Dave said that one cannot make generalised statements.

"Urge you to be ethical, courageous and help as many people as you can. Success is important, but its not the only thing thats important. I love money, I am a capitalist at heart but i do many pro bono matters in a year. You must engage in helping others and it will give you a different kind of satisfaction."