In Bhushan Case, SC Comments On 2018 Judges' Press Conference; Says 'We Hope It's The First And The Last Occasion' 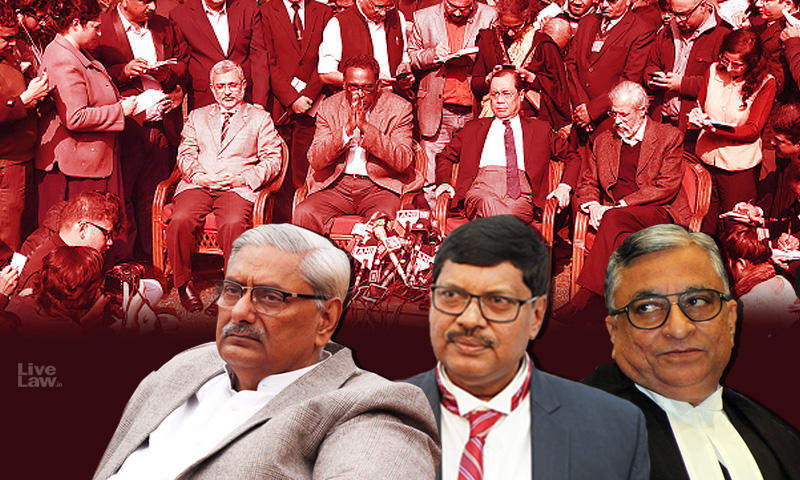 x
"Allegations made, if any, publicly cannot be met by sufferer Judges. It would cause suffering to them till eternity"

Some interesting comments have been made in today's judgment in Prashant Bhushan contempt case by Justice Arun Mishra led bench about the Press Conference held by four Supreme Court judges in January 2018. The court observed thus:

"We hope it was the first and the last occasion that the Judges have gone to press, and God gives wisdom to protect its dignity by internal mechanism, particularly, when allegations made, if any, publicly cannot be met by sufferer Judges. It would cause suffering to them till eternity. Truth can be the defence to the Judges also, but they are bound by their judicial norms, ethics, and code of conduct.",

These observations were made while addressing the defence raised by Bhushan relying on the statements made by four SC judges in the Press Conference. Referring to it, Bhushan had said that this opinion has been shared by many others including the retired judges of this Court. The bench, also comprising Justices BR Gavai and Krishna Murari, rejected this defence by observing thus:

"The code of conduct for advocates is equally applicable to the lawyers also, being part of the system. The Rules of Professional Ethics formed by the Bar Council, though couched under statutory power, are themselves not enough to prescribe or proscribe the nobility of profession in entirety. The nobility of profession encompasses, over and above, the Rules of Ethics. Lawyers, as a class, are looked by the public as intelligentsia."

The Court also referred to the following clauses of the 'Restatement of Values of Judicial Life' adopted in the Chief Justices' Conference at New Delhi on September 18­-19, 1992:­

"..(8) A Judge shall not enter into a public debate or express his views in public on political matters or on matters that are pending or are likely to arise for judicial determination. (9) A Judge is expected to let his judgment speak for themselves. He shall not give interview to the media.

On 12th January 2018, four sitting judges [Justices J. Chelameswar, Ranjan Gogoi, Madan B. Lokur and Kurian Joseph] of the Supreme Court held a press conference, saying that the administration of the apex court is "not in order" and many "things less than desirable" are happening in last few months. ""This is an extra-ordinary event in the history of Indian judiciary.We have no pleasure doing it but we were compelled.For some time the administration of justice is not in order. Many things less than desirable has happened in the last three months.We have a responsibility to the nation to the institution that is why we are here.... Several times we tried to persuade the chief justice towards getting things right but we failed.Democracy cannot survive like this.We met him today also but failed.This is why we thought it fit to call a press conference", the judges had stated that day.

These four Judges had also written a letter to the then Chief Justice of India Dipak Misra, airing their grievances on Master of Roster issue and other matters.

Notably, the assignment of the Loya case to a bench headed by Justice Arun Mishra was the trigger point for the judges conference, as suggested by Justice Gogoi in the press meet.