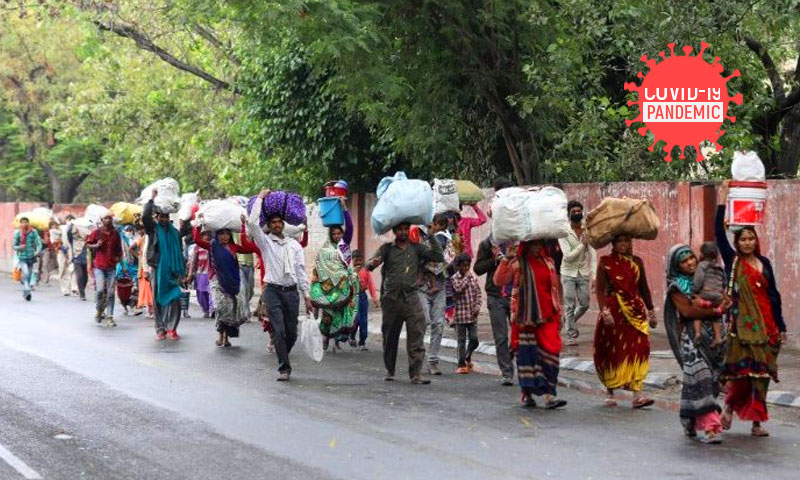 A petition has been filed in the Supreme Court seeking directions to Central & State Governments for payment of compensation to all migrant workers who have succumbed to injuries and death during their journey back to native places.The plea has been filed by Advocate Reepak Kansal averring that there have been news reports fraught with` serious accidents and deaths of migrants across...

A petition has been filed in the Supreme Court seeking directions to Central & State Governments for payment of compensation to all migrant workers who have succumbed to injuries and death during their journey back to native places.

The plea has been filed by Advocate Reepak Kansal averring that there have been news reports fraught with` serious accidents and deaths of migrants across the country, making their journey back homes during the nationwide lockdown which require indulgence of the Court so as to "protect and safeguard the human and fundamental rights" of migrant workers.

While pointing out that the Top Court accepting the submission of the Central Government on March 31 (while hearing a PIL) "that there were no migrant workers on the roads anymore as governments had ensured that they were being housed and fed" has effected its reputation, the plea avers that High Courts across the country have been pro-active in protecting the rights of migrant workers. The plea also contends that the Central Government had not produced "true facts" before the Supreme Court on March 31.

"Believing on the submission of Central Government, the court accepted the submission. It is highlighted by the Press and effected the reputation of this Hon'ble Court. On the other hand various High Courts came forward to protect the fundamental rights of migrant workers." - Excerpt of petition

Furthermore, the petition seeks directions to ensure that proper medical facilities are also provided for injured migrant workers as well as others who are on their way or have reached destination.

"The problem of migrant workers is not entirely unique to India, but this sudden lock-down without prior arrangements and facilities, make them more sufferer by denying protection of their human rights as well as fundamental rights. There was no proper arrangement & facilities for these migrant labors prior to announcement of nation lock-down and these migrant labor are forced to live where they were or towards their native place" - Excerpt from Petition

The plea also highlights the alleged discrimination between migrant workers and those who are stranded abroad, averring that the Central Government has introduced a massive mission titled "Vande Bharat" for emigrants. However, migrant workers remain excluded from any benefit.

"....there is discrimination with these interstate migrant workers while introducing a massive mission titled as Vande Bharat by respondent / Central Government to bring back those got stuck in other countries due to the global Covid-19 situation by excluding the interstate migrants workers" - Excerpt of plea

Further, It is stated that the Government has adopted a "pick and choose" policy to pay compensation to the deceased migrants, thereby highlighting the responsibility of the Central & State Government's to take appropriate action for protection of their fundamental rights as envisaged under the Constitution of India.

The plea also emphasises on the international framework subsisting for protection of migrant workers and international obligations of India in terms of the Universal Declaration of Human Rights viz. Articles 7 & 8 to which India is a signatory.

"United Nations Convention constitutes a comprehensive international treaty regarding the protection of migrant workers' rights. It emphasises the connection between migration and human rights. The Convention aims at protecting migrant workers and members of their families; its existence sets a moral standard, and serves as a guide and stimulus for the promotion of migrant rights in each country." - Excerpt of Plea

Apropos this, the plea draws corollaries in the Constitution of India to effectuate economic and social planning viz. item 20 of List III "which says that social planning body can provide leadership and facilitation in bringing together key people around a specific problem or issue"

Additionally, the petition also seeks directions to the Government(s) so as to save the migrant labourers from atrocities of police and security agencies.