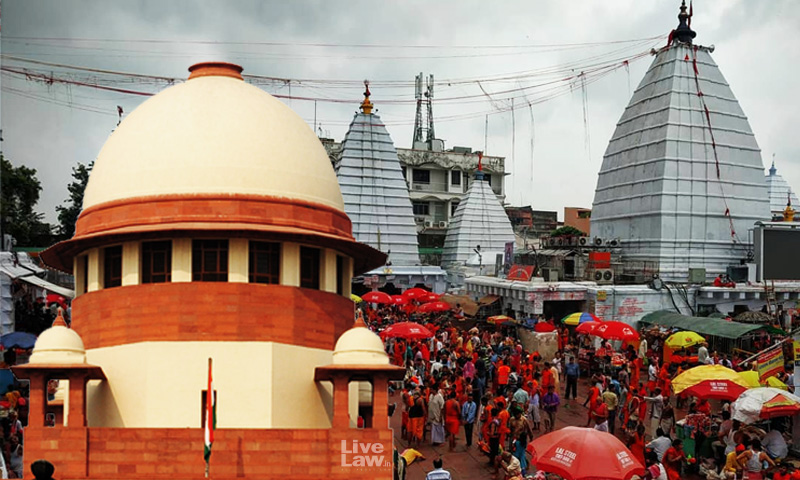 "We earnestly request them to find out a possibility of limited entry of general public in temples, churches and mosques in the State."

The bench headed by Justice Arun Mishra observed that, in all religious places, entry of limited number of persons/devotees should have been allowed as is being done throughout India. It said the High Court ought not to have directed that no entry should be permitted in the months of Shravan and Bhado as it for the State Government to take a call on this.

The Court then disposed the appeal by requesting the State Government to find out a possibility for darshan, which ought to have been done for general public as is being done in Ujjain, an another Jyotirligam. The Court also suggested to the state to find out a possibility of limited entry of general public in temples, churches and mosques in the State.

"The High Court has rightly ordered that Shravani Puja cannot be held holding big congregation fair not even the Kanwar yatra could be permitted due to Covid 19, It appears prima facie that total restriction on darshan by public is prima facie unreasonable."

During the hearing, the petitioner contended that, at least 20,000-30,000 Pandas, who are being allowed entries in the premises of Baidhyanath Jyotirlinga Temple but, at the same time, general public is deprived of even limited entry in the temple premises. The bench expressed concern regarding this and observed that it is not happy with the situation that thousands of pandas are being permitted entry in the temple every day.

"Entry of such large number of pandas, as alleged, should not be permitted. Same is required to be regulated and only limited number of persons as may be permissible as per social distancing norms should be permitted to enter the temple premises. When State Government is prohibiting the entry of general public completely and there is not even online booking permitted of few persons of general public to enter the temple premises, so that they could have darshan from the distance. We feel that State and Trust should have made an arrangement for regulated entries of pandas while maintaining social distancing. We were shown a video by the learned counsel appearing on behalf of the petitioner that large number of pandas were there at the same time in the sanctum sanctorum during the month of Shravan. Let State Government and the Temple Trust make an arrangement that no large congregation takes place even of pandas in the temple premises and Garbh Grih. It is absolutely necessary in order to prevent the spread of Covid 19 infection. The State Government to ensure that only limited number of persons, maintaining social distancing, be that they are pandas and priests of the temple, enter the premises at the same time in the temple premises which may be permissible as per the 4 social distancing norms issued by the Ministry of Home Affairs.....

..In the circumstances, when we find that large number of pandas are being permitted every day and even otherwise the State Government ought to have permitted systematically at least few hundred numbers of general public on the basis of online booking, giving them different timings of darshan, so that large congregation does not take place and maintaining social distancing for darshans at important festivals of the year but State has not done it so far and only two days are left from the final day of the Shravan month."

Restrictions imposed by the High Court for entire months of Shravan and Bhado was also not proper.

The bench also disapproved the High Court direction restricting entry for for entire months of Shravan and Bhado. The Court cited the example of in Ujjain temple and said that there 300 persons are being allowed on the basis of prior online booking, giving them different timings.It said:

"We find that restrictions imposed by the High Court for entire months of Shravan and Bhado was also not proper. It should have been left at the discretion of the State Government, if Government can make an arrangement to permit restricted entry of general public in the temple maintaining social distancing. The High Court ought not to have directed that no entry should be permitted in the months of Shravan and Bhado. It is basically for the State Government to take a call on this. It would not be appropriate to issue directions to provide the entry.

The bench also request the state to find out a possibility of limited entry of general public in temples, churches and mosques in the State.

"The State cannot shirk from its responsibility to enforce the social distancing norms, particularly when there is opening up of such places throughout the world. As State Government has to make proper arrangements, we refrain from issuing a direction to the State Government, however, we earnestly request them to find out a possibility of limited entry of general public in temples, churches and mosques in the State. If not outside State, at least the person from within the State as is being done at some other places. We observe that State is duty bound to enforce social distancing norms on such important occasions/festivals. Let an effort be made by the State Government to find out possibility of darshan to limited number of persons which would be appreciated."

The bench then disposed the PIL with a 'pious hope' of the State taking positive steps as suggested by it 'if possible'.