'Indian Courts Are Known For Their Pro-Arbitration Stance' : CJI NV Ramana At International Conference In Dubai 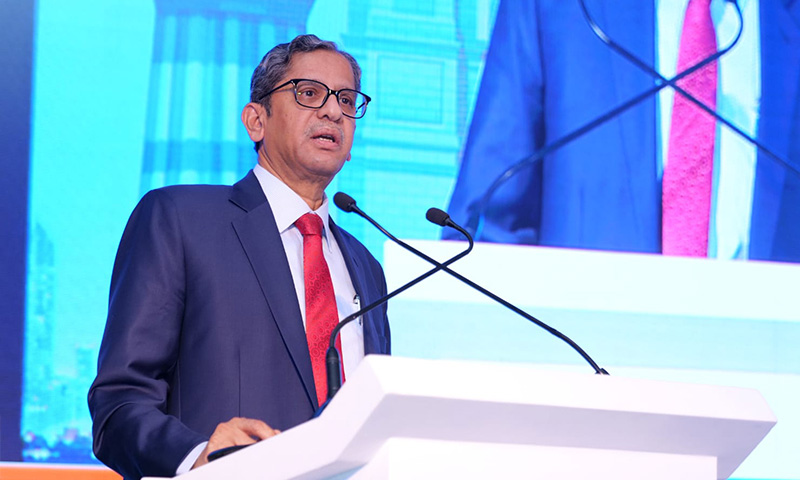 Speaking at the fourth edition of the International Conference on 'Arbitration in the Era of Globalisation' in Dubai, the Chief Justice of India, N.V. Ramana pointed out the importance of developing an acceptable and fair dispute mechanism system for the globalised world. Chief Justice Ramana briefly alluded to how countries have moved away from protectionism and towards liberalisation...

Speaking at the fourth edition of the International Conference on 'Arbitration in the Era of Globalisation' in Dubai, the Chief Justice of India, N.V. Ramana pointed out the importance of developing an acceptable and fair dispute mechanism system for the globalised world.

Chief Justice Ramana briefly alluded to how countries have moved away from protectionism and towards liberalisation and the same had resulted in growth of trade and commerce across the globe.

"The world today is very different from when I started my professional career in the 1980s. Countries across the world have moved from being protectionist States to open economies. This has led to immense growth in trade and commerce between countries. In the 1980s, the total value of world trade stood at around 2 trillion US dollars. In 2019, the value of global trade was more than 19 trillion US dollars. This clearly shows that there has been rapid growth in world trade over the past four decades, and the trend suggests that it shall grow further."

With technological advancements, improvement in the mode of transportation and communication, he noted, that the world has become a global village. He indicated that the same has also made us dependent on each other in such a manner that a crisis in one country flows down, in some manner, to the others, ultimately disturbing the global supply chain and in turn the global trade.

"Advancements in the field of science and technology, easier travel and faster communications have turned the world into a global village. At the same time, the enhanced inter-dependence also makes us vulnerable. Crisis in one part of the world often creates ripples in other parts and can affect the global supply chain. From time to time, conflicts between territories, environmental changes, natural calamities, and even the ongoing pandemic have resulted in economic disturbances. Such disturbances tend to leave a lasting impact on global trade."

Chief Justice Ramana stated that each country though a part of the globalised world has a distinct legal regime and while evolving a universally acceptable mechanism for dispute resolution the same has to be taken into account. He believed that conferences like the present one can help navigate the path of such evolution.

He was of the opinion that a dispute redressal mechanism acceptable and fair to all is the demand of the globalised world. He identified arbitration as the best suited dispute resolution mechanism because it is time bound and is aimed at delivering immediate relief.

"The globalised world demands embracing a dispute redressal mechanism that is acceptable and fair to everyone. Fairness demands a platform where both parties get an equal say in the resolution of their dispute. This is where International Arbitration comes into play. Arbitration is the best suited dispute resolution mechanism for the globalised world. International Arbitration is party driven, has procedural flexibility and involves domain experts. Further, arbitration is a time bound mechanism structured to deliver immediate relief."

It was pointed out that uniformity in the arbitration process is essential to gain the confidence of the parties, to the effect that the award passed in one jurisdiction can be enforceable in another without any hassle. He asserted that countries have already attempted to create effective structural mechanisms and provided statutory backing to the enforcement of awards.

"It might be relevant to mention that, when it comes to the enforcement of foreign decrees, different countries follow different procedures for recognition and enforcement of the same. India and the United Arab Emirates have entered into a reciprocal arrangement in 2020 to opt for automatic enforcement of foreign decrees by Courts of either countries. This is a special procedure meant only for decrees from specified reciprocating countries which form a part of the Schedule of recognised countries under Section 44A of the Code of Civil Procedure in India. Apart from the United Arab Emirates, India has entered into similar understandings with United Kingdom, Singapore, Bangladesh, Malaysia, Trinidad and Tobago, New Zealand and Hong Kong, among others."

He briefly stated about the prevalence of mediation in India as an effective form of dispute resolution.

"I think it is necessary to mention at this juncture another form of dispute resolution, that is, mediation. Mediation is increasingly gaining prominence in the international commercial sphere. Private mediations, which take place at the pre-litigation stage, are also becoming more prevalent in the country. Most arbitration clauses in commercial contracts have a multi-tiered approach, where the first attempt to resolve the dispute between parties is through mediation or negotiation. As the famous author R. L. Stevenson once said- "compromise is the best and cheapest lawyer"."

He traced back the origin of modern arbitration in India to the 18th and 19th century statutes, like the Bengal Regulation Act and Madras Regulation Act. He noted that the pan-Indian Arbitration Act was enacted in 1940. In 1985, UNCITRAL came out with a Model Law on International Arbitration. With economic liberalisation India felt the need for alternative dispute resolution mechanisms. Thus, the Arbitration and Conciliation Act, 1996 was enacted in line with the UNCITRAL Model law. In this regard he quoted Sri P.V. Narasimha Rao, the then Prime Minister of India -

"Any democracy worth the name must provide for adequate and effective means of dispute resolution at a reasonable cost; otherwise, the rule of law becomes a platitude and people may take law into their own hands, disrupting peace, order and good governance. Effective dispute-resolution is also necessary to secure the smooth functioning of trade and commerce."

He added that the Indian judicial system is not against investors; it is an independent institution which treats all parties equitably.

"Wherever I travel, I am often asked as to how investor friendly the Indian judicial system is. My answer is always the same: you can trust the Indian judiciary for its absolute independence and its inherent constitutional strength to treat all parties equally and equitably."

"A pre-requisite for achieving globalisation in its true sense is ensuring universal respect for the rule of law. Trust in the globalised world can only be built by creating institutions with a strong emphasis on the rule of law. Rule of law and arbitration are not in conflict with one another. Both arbitration and judicial adjudication aim to serve the same goal—the pursuit of justice."

He observed that the Courts in India provide assistance to the process of arbitration, but encourage substantive adjudication to be done by the Arbitral Tribunal.

"The Indian courts are known for their pro-arbitration stance. Courts in India assist and support arbitration, and leave the substantive part of adjudication to the Arbitral Tribunal itself."

He pointed out the importance of stability in the alternative dispute resolution mechanism to attract investors and stated that all pillars of democracy, in India, are working towards betterment of the arbitration process.

"A crucial component of attracting investors is providing a stable and efficacious mechanism for redressal of disputes. The legislature, executive and the judiciary of India at all levels, are committed to improving the arbitration landscape and the ease of doing business in the country. The Commercial Courts Act enacted by the Indian Parliament led to further streamlining and speedy dispensation of justice in commercial matters."

Apart from having a pro-arbitration jurisprudence, countries have to take other innovative steps to promote arbitration culture. Speaking from experience, he stated that often parties, at a belated stage, state that the argument itself is void or is not executable. Such issues, Justice Ramana felt can be addressed by developing a pre-vetting authority. He urged the panelists to discuss other possible solutions to the issues, related particularly, to execution of awards.

"After examining various cases, I find that governments and parties often take the stand that the agreement initially entered in to is void or incapable of execution, because it is against public policy or against law. To avoid such belated objections, it is high time to evolve some special mechanism. One such special mechanism could be pre-vetting by a specially constituted authority of the State, prior to the parties entering into any commercial or investment agreement. No way am I suggesting that such a step is mandatory. It would be completely voluntary. Such a vetting process would, of course, be subject to the consent of the contracting parties. This would ensure fewer disputes arising at the execution stage on the nature and sanctity of the agreement and on public policy grounds. I think it is high time to have detailed deliberations on this issue. I request the panelists to discuss and come up with new ideas and possible solutions."

He culled out some essential pre-requisites for arbitration to be more effective. They are as under -

Justice Ramana highlighted that several international dispute resolution institutions are being established across India, like the International Arbitration and Mediation Centre, located at Hyderabad, Telangana. Moreover, the Union Government has also in the latest budget provided for an Arbitration Centre to be set up in Gujarat. He stated that these independent institutions would be able to deliver to the international standards.