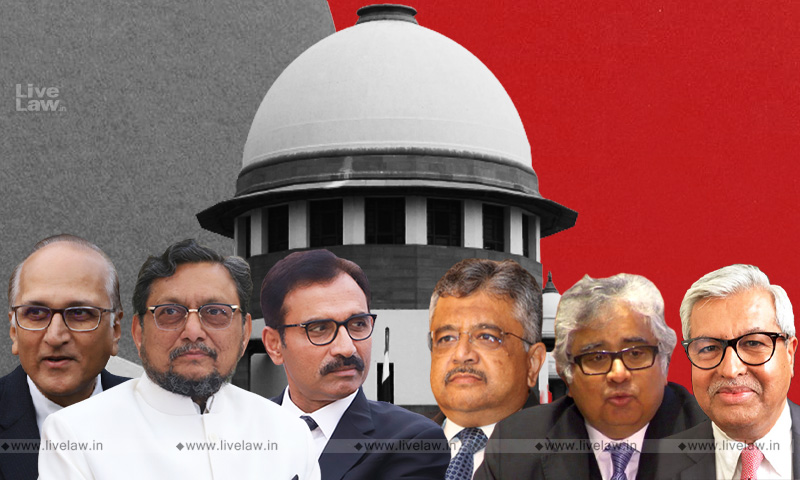 The Supreme Court on Friday witnessed a heated courtroom exchange between the bar and the bench in the hearing of the suo-moto case In Re : Distribution of Essential Supplies and Services During Pandemic.The Supreme Court was widely criticized within the legal community for its decision to take suo moto cognizance of COVID19-related issues while the High Courts are dealing with the same, and...

The Supreme Court on Friday witnessed a heated courtroom exchange between the bar and the bench in the hearing of the suo-moto case In Re : Distribution of Essential Supplies and Services During Pandemic.

The Supreme Court was widely criticized within the legal community for its decision to take suo moto cognizance of COVID19-related issues while the High Courts are dealing with the same, and also as regards the decision to appoint Senior Advocate Harish Salve as the amicus in the matter.

"With utmost humility and the greatest degree of regret, I request you to please allow me to recuse from this matter ", prayed senior advocate Harish Salve at the outset.

"This is the greatest and the most sensitive case that this court will handle in its existence. We know how the states are divided and how the country is on tenterhooks. I don't want this case to be decided in the shadow that I was appointed as the amicus curiae because I know the Chief Justice of India from school and college… ", replied Mr Salve.

"There is nothing clandestine about it. You don't have to justify anything. It was a collective act of the court ", observed CJ Bobde.

"Then there is the larger issue of the narrative in court ('Not only in court', interjected SG Tushar Mehta), which must be addressed. I had the privilege of being in court in 1978 when Mr. Palkhivala had argued in the Minerva Mills case. The matter was also bitterly argued but there was a grace in the narrative which is lost today...", advanced Mr. Salve.

"We understand that you are pained by what some of the supposedly senior advocates have said. We are also not happy about it. We understand your sentiment", said the CJI.

"Although I have no future in the judiciary, it seems that we will have to now start looking for Amicus Curiaes from those who we don't know", commented the CJ

At this juncture, the SG Tushar Mehta intervened to advance, "The country is not in a position to have a maligning competition in the media! It was the highest court of the country which took cognizance of an issue which is affecting every citizen of the country! When I read and saw certain comments that the digital and print media are broadcasting, I realised that it is virtually abusive! Someday somebody from judiciary has to take cognizance of that!"

"And I request Mr. Salve to reconsider his request for recusal! Once any one succumbs to this, there would not be one neutral person to be appointed who would not be so pressurised! It is not about Mr. Salve or Chief Justice of India Bobde!", he continued.

Justice L. Nageswara Rao also remarked, "It was not the intention of the Supreme Court to transfer cases from the High Court. Even without reading the order, even before the order was released, there was criticism based on something which was non-existent! Even though no order was passed, the institution is being destroyed! It was being said that we are the persons were stopping the High Court from passing orders?!"

Addressing senior advocate Dushyant Dave, Justice Rao said, "Mr Dave, you are imputing motives to us even without seeing the order?"

"It is not about imputing motives, it was a genuine perception! The whole country thought that this would happen! We love you, but we have every right to voice our concern as the citizens of the country! Your Lordships have done it in the past, during the Covid period, so we were apprehensive…", replied Mr. Dave.

"We didn't stall the proceedings before the High Court! The High Courts passed the orders the way they had to! We did ask the government to go and report to the High Courts and they did! What perception are you talking about? What past are you referring to?", demanded Justice Ravindra Bhat.

"Your Lordships always indicate in the order that the High Courts are free to continue the proceedings. Your Lordships did not do it here…", replied Mr. Dave.

"You are supposed to be protecting this institution…", remarked Justice Rao.

"We have always protected the institution. An objective criticism only strengthens it and does not undermine it!", responded Mr Dave.

"Senior advocates don't give public statements based on perception, they go by legal orders", argued the SG.

"You are the last person to be making this argument! You have been defending the government based on perception!", countered Mr. Dave.

Senior Advocate and SCBA President Vikas Singh made a brief submission next- "The country is faced with a huge anxiety! There was some apprehension because Your Lordships passed an order just because the SG was saying certain things! Last year, the SG said that there are no migrants on the road and the Court accepted it...But Your Lordships need to look into inter-state movement! The manufacturing states are Haryana and UP! There is a need for a nodal agency at the centre to look into the movement! If the oxygen is stuck two hours away from Delhi, people will die! What happened in Uphaar would happen today!"

"That is exactly our intention! ", said the CJI, even as the SG commented, "'Central agency'?! Are you aware or are you arguing on purpose?"

The SG then sought time until Tuesday to file his counter affidavit.

As the advocates continued to rage on, CJ observed, "We may have to shut off the mics and the screens if it continues like this! Don't bring it to that! The SG wants time, so we are listing the matter on Tuesday and we are shutting off the matter for now"

"I want the Chief Justice of India to have a decent farewell, not one with abuses on the public platform! I, as an officer of the court and as a person, want the CJI on his last day to have a loving farewell", said the SG.

"There has been no abusing… I object to the statement ", began Mr Dave.

However, the CJ closed the matter, remarking, "Thank you for your sentiment", and then proceeding to dictate the order, relieving Mr Salve of the duty as amicus curiae.