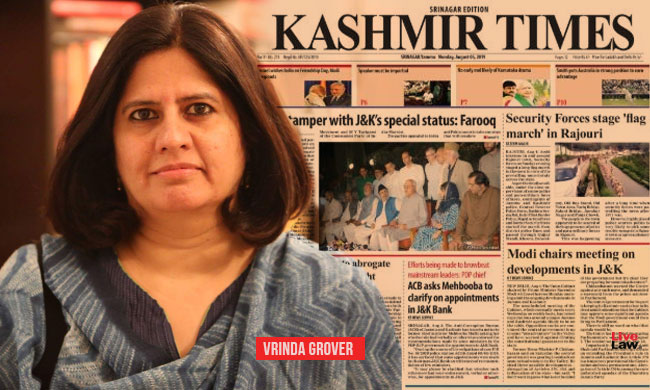 The shutdown of internet and blockade of media which has been in force in Kashmir region for past ninety days amount to disproportionate restrictions on free speech, submitted Advocate Vrinda Grover before the Supreme Court on Wednesday.

Grover is appearing for Anuradha Bhasin, Executive Editor of Kashmir Times, who has filed a petition challenging the curfew measures imposed in J&K in the wake of the abrogation of the state's special status.

"The restrictions are disproportionate. Internet is an essential attribute for the press to function freely. It facilitates the way media plays its role in a democracy. Any interference would be violative of the right to free press", she submitted, continuing her arguments from yesterday.

She contended that the orders of shutdown were passed without any application of mind. The orders were passed by the Inspector General. However, as per Rule 2(1) of the Telecom Temporary Suspension Rules 2017 no one below rank of central or state home secretary has the authority to pass such orders. If circumstances are unavoidable, order can be passed by an officer not below the rank of joint secretary. But even then, the home secretary must confirm it within 24 hours.

The hearing is going on before the bench comprising Justices N V Ramana, Subhash Reddy and B R Gavai.

The Rules do not authorize a police official to pass shutdown orders. The IG cannot be the one to issue order of temporary suspension. Under the Telegraph Act, police officials have no the authority.

She highlighted that the orders have not stated any reasons as well. Referring to Rule 2(2), she said that a reasoned order was a must for mobile shutdown. Based on this, she countered the Government's stand that stating of reasons was not necessary and that the order was not amenable to judicial scrutiny.

The order is based on an 'apprehension' of 'likelihood' that there would be danger to the law and order situation. That is a weak ground for imposing such a shutdown, she continued.

At this stage, Justice Gavai interjected to ask if national security was a weak ground.

Grover replied that the orders do not mention national security as a ground; they state apprehension to law and order as the ground.

"Public order is not the same as law and order. If the public at large is disturbed, that can be a public order issue. But all instances of breach of peace cannot be a problem of public order", she said.

She also said that a general order of suspension of mobile network cannot automatically apply to media. This argument was based on Section 5 of the Telegraph Act.

Upon being questioned by the bench why a general order isn't sufficient , Grover clarifies that even if there's no specific order, the general order must specify that there are restrictions on the media and give reasons. Proviso to the sec 5 says so#Kashmir

She referred to proviso to Section 5(2) of the Telegraph Act, which states that press messages intended to be published in India of correspondents accredited to the Central Government or a State Government shall not be intercepted or detained, unless their transmission has been prohibited.

"Not only does it violate the rights of a journalist, but the shutdown is also violative of the citizen's right to know, which is recognised by the court as part of freedom of expression", she added.

Grover : Not only does it violate the rights of a journalist, but the shutdown is also violative of the citizen's right to know, which is recognised by the court as part of freedom of expression#Kashmir