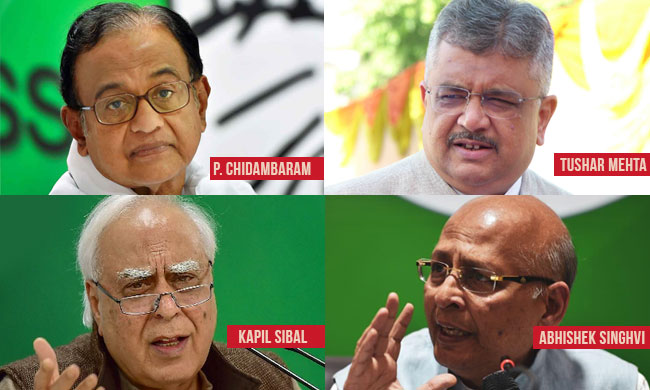 The Supreme Court on Friday reserved judgment on the petition filed by former Union Finance Minister P Chidambaram against the September 30 judgment of the Delhi High Court which denied him regular bail in the INX Media case.The bench comprising Justices R Banumathi, A S Bopanna and Hrishikesh Roy also heard the cross appeal filed by the CBI against the finding of the Delhi High Court...

The Supreme Court on Friday reserved judgment on the petition filed by former Union Finance Minister P Chidambaram against the September 30 judgment of the Delhi High Court which denied him regular bail in the INX Media case.

The bench comprising Justices R Banumathi, A S Bopanna and Hrishikesh Roy also heard the cross appeal filed by the CBI against the finding of the Delhi High Court that Chidamabaram did not pose a 'flight risk' and that there was no apprehension that he would tamper evidence. The High Court however denied him bail observing that he had the potential to influence witnesses considering his stature as a Senior Advocate and former Union Cabinet Minister.

At the outset, Solicitor General Tushar Mehta informed the bench that chargesheet was filed by the CBI today against Chidambaram, his son Karti, former INX Media head Peter Mukherjee and eleven others for offences of cheating, forgery and criminal conspiracy under Sections 120B, 420, 468, 471 of Indian Penal Code and offences under Sections 9 and 13(1) (d) of Prevention of Corruption Act.

The SG criticized the Delhi HC finding that Chidambaram did not pose a flight risk and that he was not likely to tamper evidence.

That he was a reputed man cannot be cited as a reason to hold that he will not abscond. Many reputed persons have fled the country after committing economic offences.

"We should look at the gravity of offence. Is it such a serious offence that the accused could flee. As a nation we are facing this problem. Don't decide this based on one Petitioner.

SG : I am saying keep the present Petitioner aside. The nation cannot afford to allow people who commit such offences to leave the country.#PChidambaram #INXMediaCase@PChidambaram_IN

The SG added that Chidambaram remained highly influential and has the potential to access documents relating to the crime and tamper them.

"We are not dealing with a usual bail application", submitted the SG.

Commenting on the allegations against Chidambaram, the SG said that the probe has revealed that illegal investments of more than Rs 400 crores came into INX, and also went out without permission. There was downstream investment into other companies of INX without any application.

When Chidambaram, as Finance Minister, received complaints about the INX deal, he did not take any action. There are statements of Mukherjeas that they have paid money to Karti Chidambaram on Chidambaram's instructions. Karti's companies did not render any service to INX, SG Tushar Mehta said.

"What was the money for if no service in exchange?", SG asked.

Senior Advocate Kapil Sibal, appearing for Chidambarm, submitted that the contents of chargesheet cannot be referred in a bail application.

Chidambaram should be granted bail applying the triple tests for bail - flight risk, tampering of evidence and influencing of witnesses.

Sibal also mentioned that the High Court has found in favour of Chidambaram with respect to first two tests.

He has been in custody for 58 days - 15 days CBI custody and 53 days judicial custody - and there is no possibility of influencing witnesses. Sibal also made mention of Chidambaram's advanced age and health problems.

In a bail matter, one cannot go into the merits of the case. If the chargesheet has material, the trial court will decide on that : Sibal @KapilSibal #INXMediaCase #PChidambaram

The CBI is interested only in humiliating Chidambaram and facilitating a media trial, Sibal said. The Solicitor General took strong objection to this submission of Sibal.

"The question regarding bail always revolves around tampering of evidence. At no point, in all this time, did they raise the concern of influencing witness to tamper evidence", Singhvi said.