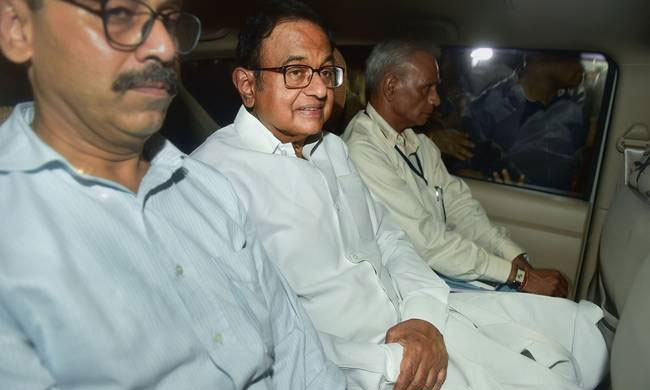 The Central agency has sought 5 Days custody of Chidambaram to unearth the money trail in the INX media case.

The Order is likely to be pronounced in 30 minutes.

Solicitor General Tushar Mehta,  appearing for the CBI,  submitted that there was material evidence showing the involvement of Chidambaram in the scam. He remained evasive and non-cooperative during the investigation, the SG said.  To unearth the money trail in the case, his custodial interrogation is necessary.

"Rght to silence is constitutional right, which I concede. But he was evasive to the questions which were put to him, questions which only he can answer", Mehta submitted.

The Solicitor General also referred to the findings made by Justice Gaur of Delhi High Court that bail cannot be granted in an economic offence of such grave magnitude.

The case diary was handed over to the judge to show the stage of investigation.

Arguments by Sibal and Singhvi

Sibal submitted that the co-accused in the case, including Karti Chidambaram, have been granted bail. Sibal questioned the need for custodial interrogation of Chidambaram at a stage when the investigation has been completed and a draft charge sheet has been prepared.

The FDI clearance for INX media was granted by Foreign Investment Promotion Board (FIPB). Chidambaram, as the then Finance Minister, merely approved the FIPB decision in ordinary course of business. It was a collective decision. However, CBI has not arrested or questioned any officers of FIPB.  There is no whisper of allegation in the FIR that Chidambaram has received illegal gratification as a quid pro quo for the INX FDI clearance, submitted Sibal.

The FIR was registered almost ten years after the incident.

The CBI has not arrested or questioned anyone from FIPB but is targeting Chidambaram. FDI clearance for INX media was a collective decision, with the then Finance Minister merely approving it in ordinary course of business : Sibal #PChidamabaramArrested

Countering the argument of Solicitor General that Chidambaram was evasive during probe, Sibal sad :

After Sibal, Dr Singhvi supplemented his submissions. He said that the entire case was based on the confession of Indrani Mukherjea, who herself is a co-accused.

After July 2018, the CBI has not summoned Chidambaram even once. So what is the need for the sudden urgency, Sighvi asked. The confession by a co-accused is an extremely weak piece of evidence.

Arrest is an exception and bail is the rule.

Non cooperation is not when I don't answer the way you want me to answer. It is when you call 10 times and I say no 5 times. Here I've been called only once in 14 months. I've not been evasive, I've answered your questions : Singhvi #PChidamabaramArrested

Citing three tests for denying bail  -  1) Non cooperation 2) Tampering of evidence 3) Risk of fleeing - Singhvi said that none of them were present in the case.

Rebutting the arguments of Singhvi and Sibal, the Solicitor General said that Chidambaram has been evasive regarding questions which the CBI expects him to have knowledge of.

He also pointed out that the co-accused were granted bail only after they were remanded to CBI custody.

" We'll be failing in our duty to the nation as a prosecution if we don't reach the bottom of the matter", Solicitor General submitted.

Chidambaram, who is presently a member of the Rajya Sabha, has been accused of committing offences under Prevention of Corruption Act and Prevention of Money Laundering Act in respect of INX Media investments. Both the CBI and Enforcement Directorate have lodged cases against him in 2017 and 2018 respectively.

He was arrested by the central agency from his residence at Jor Bagh, Delhi and was taken to the CBI Head Quarters on Wednesday night around 9.30 PM, after a dramatic press conference held by him at the Congress office in national capital an hour ago.

The confession made by Indrani Mukherjea, former head of INX media group, that money was routed through companies linked to Karti  for FIPB approval was cited by the CBI against Chidambaram.  Mukerjea, who is at present in Mumbai's Byculla jail in the Sheena Bora murder case, had given her confession before the Magistrate under Section 164 of the Code of Criminal Procedure.

Ever since the Delhi High Court had rejected his application for pre-arrest bail on August 20, the CBI had been attempting to execute the arrest warrant issued against him, while his lawyers sought urgent listing of the matter before the Supreme Court. CBI had reported that the MP had been evading arrest and a look out notice was issued against him.

In the unannounced press conference held on Wednesday night, he denied all the allegations leveled against him or his family and said that he had not been accused of any offence in the FIR. "No chargesheet was filed by the CBI or ED before the competent court and the FIR filed by CBI does not impute to me any offences" he said.

He added that his personal liberty was under constant threat from the "pathological liars" and if given a choice between life and liberty, he would choose liberty.

He said that the Delhi High Court had granted him interim protection last year by orders dated May 31, 2018 and subsequently, July 25, 2018. On January 25, 2019, the judgment was reserved. However, 7 months later, the high court dismissed his bail application. His lawyers appealed repeatedly before the SC to list his matter urgently and grant him interim protection in the meanwhile, but in vain.

He said, "I was accused of running away from justice but rather, I was seeking justice".

He explained 27 hours of his absence saying that he had been working through all the documents last night, with his lawyers and it was only in the morning that the process was completed.

Lastly, he said that the Supreme Court had listed the hearing of his matter for Friday and as a person who had utmost respect for the law, he was ready to wait until then. "In the name of freedom, I can only hope and pray that the investigating agencies will also respect the law", he said.

After the conference, he went to his residence in Delhi from where the CBI arrested him.

What happened in SC in the pre-arrest bail plea?

In the Supreme Court on Wednesday, two rounds of mentioning were made by Senior Advocate Kapil Sibal before Justice Ramana - one in the morning and another at 2 PM - for urgent hearing of the petition.

Though Sibal submitted that CBI had issued look out notice for Chidambaram and could arrest him anytime, Justice Ramana maintained that out of turn hearing cannot be given to the petition unless it is listed as per proper procedure.

Since CJI Ranjan Gogoi and the second senior judge Justice Bobde were in the Constitution Bench hearing the Ayodhya matter, the mentioning was made before Justice Ramana, the next available senior judge.

Justice Ramana said that only the CJI could pass orders regarding listing of the case and forwarded the file to the office of CJI.