INX Media - There Is No Retrospective Application Of PMLA Against Chidambaram : Solicitor General 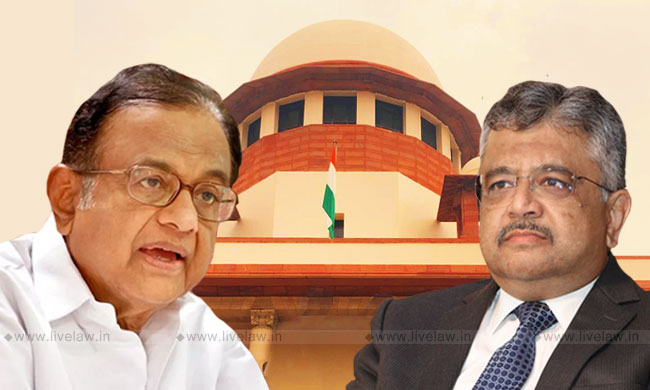 Countering the arguments of Chidambaram's lawyers that Prevention of Money Laundering Act was being retrospectively applied to Chidambaram, Solicitor General Tushar Mehta submitted on Wednesday that the money laundering continued even after the 2007 INX FDI deal. Senior Advocate Dr A M Singhvi had submitted yesterday that sections added to PMLA in 2009 were invoked against Chidambaram...

Countering the arguments of Chidambaram's lawyers that Prevention of Money Laundering Act was being retrospectively applied to Chidambaram, Solicitor General Tushar Mehta submitted on Wednesday that the money laundering continued even after the 2007 INX FDI deal.

Senior Advocate Dr A M Singhvi had submitted yesterday that sections added to PMLA in 2009 were invoked against Chidambaram with respect to the INX FDI transaction carried out in 2007.

The Solicitor General will continue the arguments tomorrow. The bench of Justices Bhanumati and Bopanna has extended the interim protection from arrest to Chidambaram in the ED case.

The SG said that laundering is a stand alone offence. If the money that has been laundered is in use, that too is an offence. The Enforcement Directorate has the statutory right to arrest a person on a reasonable belief that he has committed offence. The Supreme Court cannot curtail the right to seek custodial interrogation.

"We are dealing with very intelligent people. A stupid man cannot launder money. Such an offence is never commited in the heat of the moment. It has to be hidden through layers of concealment. It is mostly a digital operation, unlike other offences like rape where forensics are conducted.", the SG told the bench.

"Laundering is an independent offence, and India is a part of the global statutory network to crackdown on laundering and we have a reciprocal international duty to ensure punishment for launderers", SG said.

The Solicitor General further urged the Court to look into the case diary to satisfy the 'judicial conscience' about the need for custodial interrogation. Referring to Section 172 of the Code of Criminal Procedure, the SG said that the case diary, though cannot be used as evidence, can be used by Court as an aid in inquiry.

During a bail hearing, all materials collected by the probe agency need not be divulged to the Court, as it might prejudice the investigation, submitted SG Mehta.

"We cannot share report of the probe till the chargesheet is filed. It is too sensitive", he said.

At this juncture, Senior Advocate Kapil Sibal interjected to say that it was never the petitioner's argument that all materials should be shown to the Court.

While a debate on this aspect was going on, Justice Bhanumati, who heads the bench,  intervened to clear the air. She said that the argument of Sibal was that no material, which has not been put to Chidambaram during interrogation, should be shown to Court.