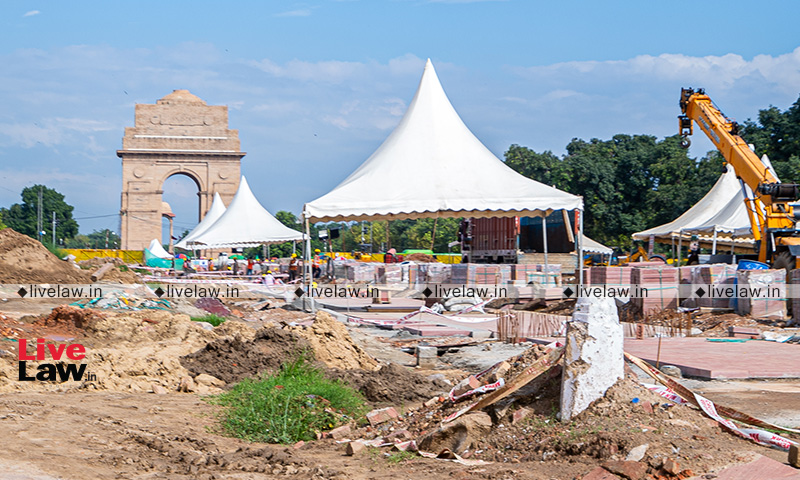 While hearing a matter related to the air quality crisis in Delhi, the Supreme Court on Monday sought the response of the Central Government to the allegation that construction works for the Central Vista Redevelopment Project was a major cause of air pollution.Senior Advocate Vikas Singh, appearing for the petitioner, submitted before a bench led by the Chief Justice of India NV...

While hearing a matter related to  the air quality crisis in Delhi, the Supreme Court on Monday sought the response of the Central Government to the allegation that construction works for the Central Vista Redevelopment Project was a major cause of air pollution.

Senior Advocate Vikas Singh, appearing for the petitioner, submitted before a bench led by the Chief Justice of India NV Ramana that the Central Vista works were going on despite the ban imposed by the Supreme Court on construction activities in Delhi-NCR to reduce air pollution.

"Larger constructions contribute more. Central vista is going on unabated. Central vista can't be more important that lives of people. I can show you videos", he added.

"This (Central Vista) was the cause of this petition initially but I'll answer it on merits", Solicitor General Tushar Mehta remarked.

"This petition had nothing to do with Central Vista", Senior Advocate Vikas Singh responded.

Addressing Mr Singh, the CJI said " Now we're struggling how to control pollution whether it is Central Vista, or pollution industries etc. Don't think we don't know anything. We also know. We'll ask Mr Mehta, he'll have to explain."

The CJI further added "Don't flag certain issues and focus on those issue so the issue is diverted. If Mr Mehta has to answer he'll have to answer. We're not allowing Mr Mehta to go away. If you're saying central vista alright we'll ask him."

The bench, also comprising Justice DY Chandrachud and Justice Surya Kant, asked the Solicitor General of India Tushar Mehta to get instructions from the Central Government regarding the submissions of Singh.

The order passed by the bench stated :

"Mr. Vikas Singh, learned Senior counsel appearing for the petitioner has raised certain issues with regard to construction activities being carried out in the National Capital Territory of Delhi, which according to him, is the major cause of air pollution in Delhi.

In view of the above, Mr. Tushar Mehta, learned Solicitor General is directed to file response to the said submission made by Mr. Vikas Singh, learned Senior counsel and get instructions in this behalf on the next date of hearing".

The Supreme Court has also directed the Governments of National Capital Territory of Delhi, and the States of Uttar Pradesh, Haryana and Punjab to file affidavits showing their compliance with the directions issued by the Commission for Air Quality Management in National Capital Region and Adjoining Areas.

If any directions are remaining not complied, the States have to comply with them forthwith.

The bench was hearing a writ petition (Aditya Dubey(Minor) and others versus Union of India and others) which seeks directions to reduce the air pollution in Delhi-NCR. The matter will be next considered on December 2.

On November 24, taking note of the air quality crisis in the national capital, the Supreme Court had re-imposed the ban on construction activities in Delhi-NCR until further orders. The Commission for Air Quality Management in Delhi-NCR had earlier decided to lift the ban with effect from November 22, taking note of the slight improvement in the air quality.
The Court however permitted non-polluting works related to construction such as carpentry, electrical work, plumbing and interior decoration to continue. The Court also directed the States to use the funds which have been collected as labour cess for the welfare of construction workers to provide them subsistence for the period during which construction activities are prohibited and pay wages notified under the Minimum Wages Act for the respective categories of workers.
Click here to read/download the order
TagsCentral Vista Project #CJI NV Ramana #Justice DY Chandrachud Justices Surya Kant Senior Advocate Vikas Singh
Next Story
Similar Posts
+ View more
Law Firms
+ More