'Is This The View Of Entire Court?' : Jaising Urges All SC Judges To Reconsider Prashant Bhushan Contempt Verdict 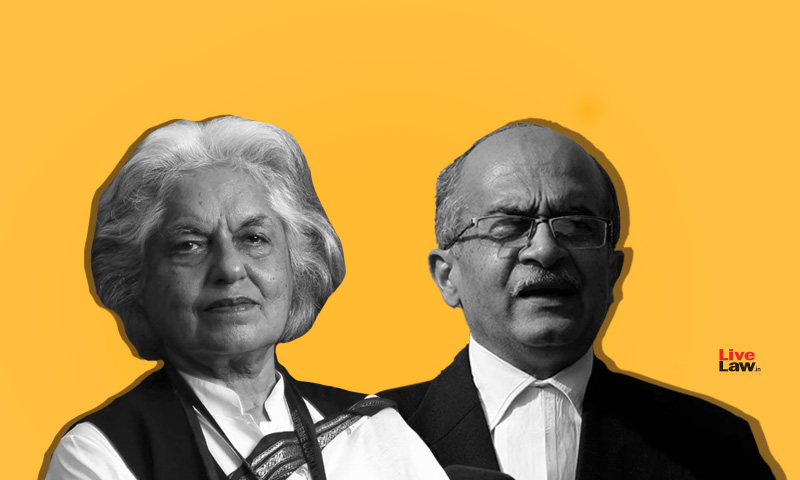 Senior Advocate and former Additional Solicitor-General of India Indira Jaising appealed to the Supreme Court to reconsider the judgement rendered by a 3-Judge Bench headed by Justice Arun Mishra wherein Advocate Prashant Bhushan was held in contempt of court over two tweets. Jaising sought for a full Court of 32 judges to hear the matter.

The remarks were stated during Jaising's Keynote Speech at a Press Conference hosted by Indian-Americans who stood in solidarity with Bhushan and decried the contempt charges against him.

On 14th August, a Bench comprising of Justices Arun Mishra, BR Gavai and Krishna Murari held Bhushan guilty of contempt of court in the Suo Moto Contempt case initiated against him over two of his tweets about the Chief Justice of India and the Supreme Court. The Bench will now hear him on his sentence on August 20, that is, tomorrow.

In this context, Jaising poignantly noted, "If I speak my mind, therefore I am. But, if this right comes with a threat, then I am no more".

"We have a duty to speak if we see the Court deviating from its course", said Jaising.

Jaising also questioned the existence of the offence of criminal contempt in our society.

"We as citizens have a duty to be vibrant in our criticism. But, the very foundations of free speech have been shaken now. Why are we not being permitted to speak freely? Truth to power".

She remarked that the Supreme Court's core function of dispensation of justice belonged to everyone and they had to be accountable to the public at large. This accountability could only be exercised with free speech, without fear of contempt. She also reflected that the Supreme Court was the public's ally and an Indian citizen's public jurisdiction was public, which, therefore, gave the citizens the locus to dissent.

Jaising then addressed the infirmities in the judgment by stating that the Court had failed to address the aspect of fair criticism and failed to show how the tweets could constitute as interference in justice. She also raised the issue pertaining to statement in the judgment that public confidence in the Court would be shaken.

"It said that public confidence will be shaken in the Court. Was the public consulted? Or do the three Judges constitute the public?", said Jaising.

Jaising: Further, it said that public confidence will be shaken in the Court ? Was the public consulted ? Or do the three Judges constitute the public ?

She, however, noted positively that a number of editorials and statements against the judgment portrayed that people favoured free speech.

Jaising concluded her Keynote Speech by appealing to the Supreme Court to reconsider the judgement.

"I appeal the Supreme Court to reconsider the judgment by a full court of 32 judges. Is this the view of the entire Court? We would want to know that. Thank you for giving me the space to address this".

Jaising: Why are we not being permitted to speak freely ? Truth to power. The Supreme Court's core function of dispensation of justice belongs to you and me; they must be accountable to the public at large. This can only be exercised with free speech, without fear of contempt.

In a related development, Justice Kurian Joseph, former judge of the Supreme Court, issued a statement suggesting that intra-court appeal should be provided for suo moto contempt cases. He suggested that there should be the safeguard of intra-court appeal to "avoid even the remotest possibility of miscarriage of justice".

He pointed out that the contempt verdict in the suo moto case against Justice C S Karnan was passed by a bench of 7 senior judges.

He also added that "Important cases like these need to be heard elaborately in a physical hearing where only there is scope for a broader discussion and wider participation".