ISRO Espionage Case - Justice DK Jain Committee Report By Itself Cannot Be Basis To Proceed Against Accused; CBI Will Have To Collect Materials Independently : Supreme Court 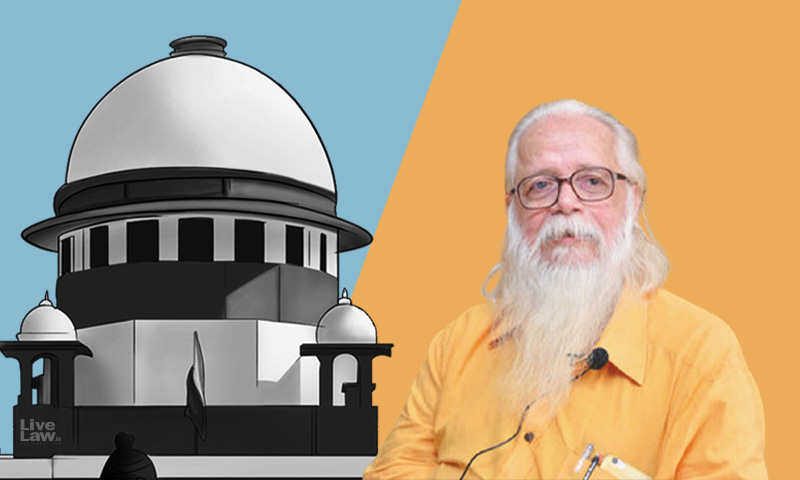 The Supreme Court on Monday clarified that the enquiry report submitted by former Supreme Court judge Justice DK Jain on the conspiracy angle against former ISRO scientist Nambi Narayanan in the infamous espionage case cannot be the sole basis to proceed against the alleged errant police officers.A bench comprising Justices AM Khanwilkar and Sanjiv Khanna made it clear that the Central Bureau...

The Supreme Court on Monday clarified that the enquiry report submitted by former Supreme Court judge Justice DK Jain on the conspiracy angle against former ISRO scientist Nambi Narayanan in the infamous espionage case cannot be the sole basis to proceed against the alleged errant police officers.

A bench comprising Justices AM Khanwilkar and Sanjiv Khanna made it clear that the Central Bureau of Investigation must collect materials independently to proceed against the accused and cannot rely only on the Justice DK Jain committee report.

"After the registration of FIR, the investigating agency must collect materials on its own and cannot proceed on the basis of the report submitted by Justice DK Jain committee. That by itself cannot be basis to proceed against the respondents or persons named as accused in the FIR registered by the CBI", the bench said in the order.

The bench made this clarification after Advocate Amit Sharma (counsel for accused officer Siby Mathews), Advocate Kaleeswaram Raj and counsel for other accused submitted before the bench that the Justice DK Jain committee report has not been shared with the accused. The lawyers argued that the refusal on the part of the CBI to share the report is causing prejudice to accused in availing their statutory remedies such as bail against the CBI FIR. They contended that the CBI is heavily relying on the report in the FIR.

At this juncture, the bench observed that the report is no longer relevant as the CBI has registered an FIR.

Solicitor General Tushar Mehta, appearing for the CBI, informed the bench that the earlier order passed by the Court on April 15 had prohibited the publication of the Justice DK Jain report. The Solicitor General also informed the bench that the FIR, which has the gist of the Justice Jain committee report, can be uploaded during the course of today itself, if the court permits.

In response, the bench said that no directions are needed from the court to upload the FIR, as the earlier prohibition was related only to the publication of Justice Jain committee report.

"The earlier order only required CBI to ensure that committee's report shouldn't be made public. Now that CBI has finally decided to proceed in matter, further steps after FIR registration will be taken as per law and no directions are required in that regard", the bench observed in the order.

Additional Solicitor General SV Raju told the bench that the Justice DK Jain committee may have to be wound up, otherwise the Government will be obligated to continue paying salary and allowances to its members.

Accepting this request, the bench passed an order to that effect :

"As the report has been finally acted upon, we accede to the request of SV Raju, learned ASG that the Justice DK Jain committee constituted under the orders of this court may cease to function. We appreciate the efforts taken by the members of the committee, including the chairman", the bench said in the order.

The bench also clarified in its order that the accused will have the liberty to take all possible remedies available in law, which will be decided by the concerned courts on merits in accordance with law.

The apex court had appointed an enquiry commission headed by former Supreme Court judge Justice DK Jain on September 14, 2018 to probe the angle of larger conspiracy in fabricating the espionage case against former ISOR scientist Nambi Narayanan.The Court had also directed the Kerala government to cough up Rs 50 lakh compensation for compelling Narayanan to undergo 'immense humiliation'.
On April 15 this year, the Supreme Court had directed the CBI to decide on further action based on the contents of the enquiry report submitted by Justice DK Jain. The Court had further directed the CBI to inform it the decision within three months.
Following that, the CBI registered FIR naming certain officers of the Kerala police, who were then handling the ISRO Espionage case and had allegedly tortured Nambi Narayanan, as accused.

In 2018, the Supreme Court had ordered setting up of the committee to take appropriate steps against the erring officials for causing 'tremendous harassment' and 'immeasurable anguish' to Narayanan and had directed the Centre and state government to nominate one officer each in the panel. Terming the police action against the ex-scientist of the Indian Space Research Organisation (ISRO) as a 'psycho-pathological treatment', the apex court had in September 2018 said that his 'liberty and dignity', basic to his human rights, were jeopardised as he was taken into custody and, eventually, despite all the glory of the past, was compelled to face 'cynical abhorrence'.

The espionage case, which had hit the headlines in 1994, pertained to allegations of transfer of certain confidential documents on India's space programme to foreign countries by two scientists and four others, including two Maldivian women The scientist was arrested when the Congress was heading the government in Kerala.

The three-member investigation panel submitted its report in a sealed cover to the apex court recently.

The CBI, in its probe, had held that the then top police officials in Kerala were responsible for Narayanan's illegal arrest.

The case also had its political fallout, with a section in the Congress targeting the then Chief Minister late K Karunakaran over the issue, that eventually led to his resignation.

Over a period of almost two-and-a-half years, the panel headed by Justice Jain examined the circumstances leading to the arrest.

The 79-year-old former scientist, who was given a clean chit by the CBI, had earlier said that the Kerala police had 'fabricated' the case and the technology he was accused to have stolen and sold in the 1994 case did not even exist at that time.

Narayanan had approached the apex court against a Kerala High Court judgement that said no action needed to be taken against former DGP Siby Mathews, who was then heading the SIT probe team, and two retired superintendents of police K K Joshua and S Vijayan, who were later held responsible by the CBI for the scientist's illegal arrest.

'There can be no scintilla of doubt that the appellant, a successful scientist having national reputation, has been compelled to undergo immense humiliation. The lackadaisical attitude of the state police to arrest anyone and put him in police custody has made the appellant to suffer the ignominy," the apex court had said in its September 2018 order.

'The dignity of a person gets shocked when psycho-pathological treatment is meted out to him. A human being cries for justice when he feels that the insensible act has crucified his self-respect,' the top court had said.

It had accepted Narayanan's plea that the authorities, who were responsible for causing such a 'harrowing effect' on his mind, should face 'legal consequences'.

The CBI, while giving clean chit to the scientist, had said that Siby Mathews had left 'the entire investigation to IB surrendering his duties' and ordered indiscriminate arrest of the scientist and others without adequate evidence being on record.

The case had caught attention in October 1994, when Maldivian national Rasheeda was arrested in Thiruvananthapuram for allegedly obtaining secret drawings of ISRO rocket engines to sell to Pakistan.

Narayanan, the then director of the cryogenic project at ISRO, was arrested along with the then ISRO Deputy Director D Sasikumaran, and Fousiya Hasan, a Maldivian friend of Rasheeda