Issues That Concern The Nation Are Not Taken Up Immediately By Judiciary : Kapil Sibal 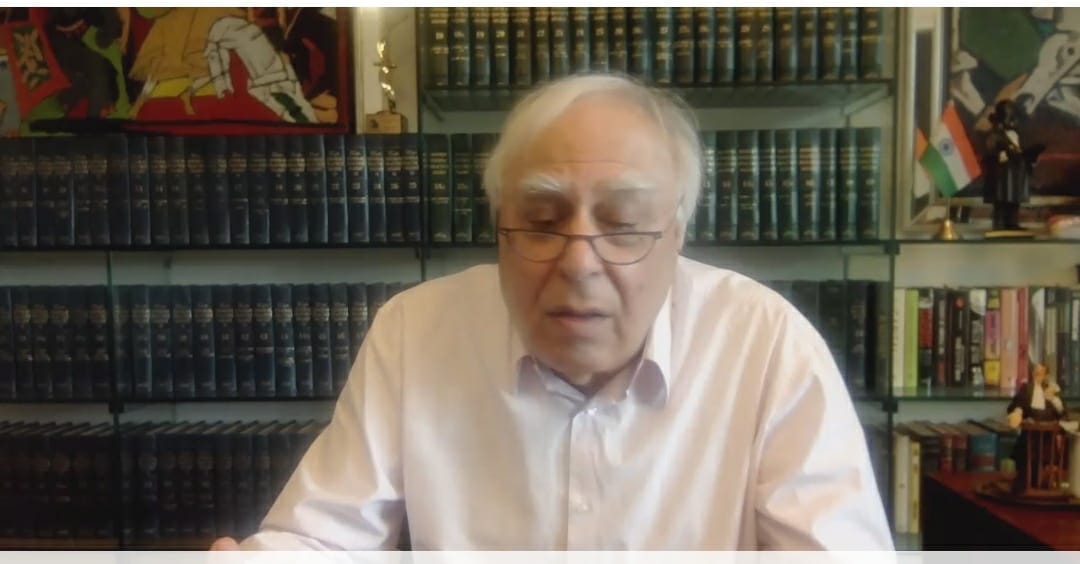 Speaking at an online seminar, senior advocate Kapil Sibal raised concerns regarding the 'Independence of Judiciary' and enunciated how it had become a worrying issue for the public at large. While touching upon various aspects of judicial independence, the Former Union Minister began by envisaging the attributes of a Judge as an individual, and the perception regarding his...

Speaking at an online seminar, senior advocate Kapil Sibal raised concerns regarding the 'Independence of Judiciary' and enunciated how it had become a worrying issue for the public at large.

While touching upon various aspects of judicial independence, the Former Union Minister began by envisaging the attributes of a Judge as an individual, and the perception regarding his ability to be fair.

"A Judge needs to look at balancing claims and equity and rule accordingly. Our expectation when we go to a Judge is that he needs to have that balance."

Adding that a judge must have the ability to listen equally to both sides, Sibal said that this was of utmost importance as the procedure of hearing a matter requires that fairness is ensured. "The procedure requires fairness and what fairness means is that the Judge must listen to both sides intently and both sides must be given the opportunity so that there is no procedural unfairness…Another important attribute of an independent and fair Judge is the ability to listen."

Moving on, the senior advocate laid emphasis on the perception of integrity of the institution, in order to maintain the trust of people who knock on the Court's doors seeking justice. Asserting that "the entire judicial structure must be perceived to have institutional integrity", Sibal spoke of the public's confidence being shaken due to doubts regarding how cases are decided, especially at the trial Court level. "Many times we find that we don't have the level of confidence in the manner in which cases are decided as we should have", he said.

Pressing the need for financial autonomy of Judges, to guarantee integrity, Sibal said, "we find that the Judges who man the Courts have integrity but occasionally there are instances of senior members on the Bench whose conduct is not as expected."

Touching upon the long debated issue of appointment of judges next, Sibal iterated that the Collegium system causes friction, because the Chief Justice has complete control over appointments which take place behind closed doors. Candidly revealing that upon elevation to the Top Court, Chief Justices of High Courts come with their set of lobbies, preferences and dislikes, Sibal claimed that nothing was hidden from the Bar.

Highlighting another important issue regarding the conduct of senior Judges or higher members of the Judiciary, Sibal referred to the instances of Former CJI Ranjan Gogoi calling a special sitting on a Saturday to hear allegations of sexual harassment levelled against him as well as acts of  Gogoi's predecessor, then CJI Dipak Misra, which led to the impeachment motion being moved against him in Rajya Sabha

"These are two serious instances of questionable conduct of higher members of the Judiciary, but there are many more instances across the board", alleged Sibal.

Speaking elaborately about administrative decisions taken in the Judiciary, the Former Law Minister questioned the manner in which cases involving specific parties were only placed before specific Benches.

"Element of discretion in allocation of cases to Benches is not consistent with the rule of law. That is an administrative decision which cannot be challenged. This is a matter of concern", he added.

Raising further doubts, which emanate from a lack of transparency, Sibal pointed out instances of Bench shuffling, overlooking elevation of Judges and also alleged that important cases were not being heard in a timely fashion. Giving the example of Justice Muralidhar being transferred from Delhi High Court to Punjab and Haryana High Court, as well as the shuffle in Gujarat High Court, after a Bench made scathing remarks against the administration, Sibal stated that "such instances affect public perception of independence of judiciary". Sibal also alluded to the controversy over Justice Akil Kureshi's appointment (without specifically naming him), to point out further problems regarding perception.

With regard to delayed hearings, Sibal alleged that the Top Court had failed to take up cases which ought to have been heard with urgency. Habeas Corpus cases are being delayed, Jammu and Kashmir administration did not submit Orders through which Section 144 was imposed across the erstwhile State, the Demonitization challenge pending since 2016 has not been heard, the issues relating to the COVID-19 pandemic were not immediately looked into and the Court has still not asked the Government to place on record the national plan under the Disaster Management Act, enlisted Sibal, amidst a slew of shortcomings on part of the Judiciary, which lead to a compromise in the perception of the institution's independence.

"The issues that concern the nation are not taken up immediately (by the judiciary) as they should be…The higher judiciary gives great credence to what the State says and it is not the liberal court as the constitution framers wanted it to be", he opined.

The issues relating to the pandemic were not immediately concerned. The statement of the law officer that no migrants were on road were readily accepted by the Supreme Court : Sibal @KapilSibal

In conclusion, Sibal went to the very roots of a Court system and reminded that the purpose of a Court was to protect the rights of the most marginalized, even from the State.

"The state is such a powerful entity, it cannot be disturbed. In fact, it's so powerful, it can disturb citizens. Judges must have a liberal attitude to protect the ones at the bottom of the ladder…the marginalized."

"I think we have reached a point where judiciary is at its nadir", Sibal said.

With regard to the increasing influence of politics in the Judiciary today, the senior Congress leader was of the opinion that the Bench was not dealing with real issues, under the current Central Government's regime. Urging the Court to play a more prominent role in ensuring the protection of constitutional values, Sibal said that "this state is slowly moving towards an autocratic authoritarian state without it being declared so…the distance between autocracy and freedom depends on what the judiciary does for its citizens. At this point we are going towards autocracy, and the judiciary must play a role in protecting the rights of citizens."

Regarding the role of the Bar in this situation, the former Bar Association President said that they were not fulfilling their duty in upholding the independence of the Judiciary as they were divided within themselves.

"We're a divided Bar. We are not playing our role.

Anybody who makes a political statement must be issued a show cause notice. When dealing with matters of law, if any member engages or affiliates themselves with politics, the Bar (local bars included) must take action. Maybe even revoke his membership", suggested Sibal.

Answering an important issue of public perception regarding cases reported in the media, and how that affects Judges, the Senior advocate urged the Courts to interfere so that free speech would be upheld, but not misused.

Outrightly stating that Judges are influenced by public perception, because of what is on the media, Sibal claimed that journalists, students, political activists and dalits were being prosecuted under UAPA because under the Act, terrorists can be named. However, the Court does not interfere because the Government says so, he added.

Alleging that mainstream media is funded by politicians and it supports prominent voices that are in power, Sibal claimed that such trends were completely against the responsibility of the media. "You must segregate the news from the views", he said. "They say there is a strategy to destabilise the country, as if an individual can destabilise this country. In such cases, judiciary gets influenced by public perception", he added with reference to the media being a mouthpiece for the Government, while the Courts do not take it upon themselves to interfere.

Again urging the Courts to interfere, Sibal claimed that what was being aired on media was not 'free speech' but 'commercial speech', which was not protected under Article 19(1)(a), and was instead a misuse of the Freedom.

With regard to social media, Sibal also added that there was no means of accountability and a great deal of money was spent in generating public opinion.

"The tendencies in mainstream and social media has destroyed the concept of fair communication. Supreme Court must look into this, instead of setting up a 9 judge bench for something like a Sabarimala review".

Sibal was speaking at the webinar hosted by Advocate J Ravindran.