"It Is A Bridge Between Judiciary And Legislature": BCI Chairman Hails Ex-CJI Gogoi's Nomination To Rajya Sabha [Read Press Release] 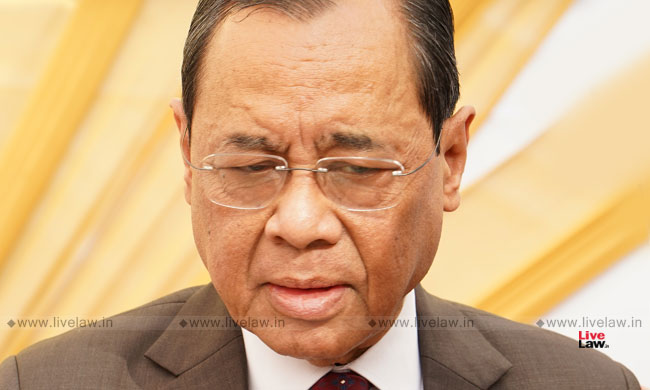 The Chairman, Bar Council of India has issued a press release, in support of the President's decision to nominate former CJI, Justice (Retd.) Ranjan Gogoi to the Rajya Sabha. As per the Press Release, presence of Justice Gogoi in the Parliament will be an "ideal opportunity" to "bridge" the gap between the legislature and the judiciary. "We hail the novel initiative taken by...

The Chairman, Bar Council of India has issued a press release, in support of the President's decision to nominate former CJI, Justice (Retd.) Ranjan Gogoi to the Rajya Sabha.

As per the Press Release, presence of Justice Gogoi in the Parliament will be an "ideal opportunity" to "bridge" the gap between the legislature and the judiciary.

"We hail the novel initiative taken by the Hon'ble President of India in nominating Shri Ranjan Gogoi, Former Chief Justice of India as a Member of Parliament (Rajya Sabha). We see it as a bridge between the Legislature and Judiciary. This, in fact, would be an ideal opportunity to portray the first hand views of the judiciary before the law makers and vis-a-versa.

We sincerely feel that the decision will prove to be a landmark and epoch decision, which will go a long way in the process of nation building. We thank Hon'ble President of India as well as the Union Government for having such a vision."

The President of India on Monday nominated the former CJI to Rajya Sabha, to fill the vacancy caused due to the retirement of one of the nominated member, Senior Advocate K.T.S. Tulsi.

Justice Gogoi has since received criticism from all quarters, regarding how his acceptance of the nomination breaches the principle of separation of powers, enshrined in the Constitution.

Condemning the same, the Council said,

"We have witnessed some comments and criticism from some quarters including former Judges of the Hon'ble Supreme Court of India and a few lawyers, which we feel is unwarranted and premature. Therefore, such hue and cry and reckless comments would be attempt to malign the image of judiciary."

"There is no law or constitutional provision, which prohibits such a nomination. Rather, the concept of nomination under Article-80(1)(a) of the Constitution of India is meant for such people only."

Pertinently, this is not the first time that a former CJI is becoming a member of Rajya Sabha, as ex-CJI Justice Ranganath Mishra was elected to the Upper House on Congress ticket in 1998. However, it is certainly the first time that a CJI will acquire a seat in the house by nomination. Commenting on the same, the Council said,

"In past also the Chief Justice of India and Judges of Supreme Court were elected as Members of Rajya Sabha after their retirement. But, there is a mark difference between their election and "the nomination of Mr. Justice Ranjan Gogoi". Earlier, the Judges after their retirement became political and contested the election for the Membership of Rajya Sabha with a party ticket. However, here, Mr. Justice Gogoi has not joined any political party, he is the choice of the President of India and we appreciate this nomination, which in our opinion is the fittest from every point of view.

It is most unfortunate that without even witnessing the part or role to be played by Shri Ranjan Gogoi, Former Chief Justice of India in Parliament, such comments are being issued.

The former Judges and the Lawyers should refrain from making the criticism, but, it appears to us that a few former Judges and a handful of lawyers are in the habit to criticize almost each and every move of the Government and many a times, they have gone to the extent of criticizing and commenting upon the decisions of the Apex Court even."

The Council has thus requested all the stakeholders to refrain from making any adverse remarks and to wait for the outcome of this move.

"Let's wait and watch. See the performance of Mr. Justice Ranjan Gogoi as a Parliamentarian. He has performed as the Chief Justice of India to the full satisfaction of the nation."