"It's a New Trend, Government Maligning the Judges! It's Unfortunate: Chief Justice Of India NV Ramana 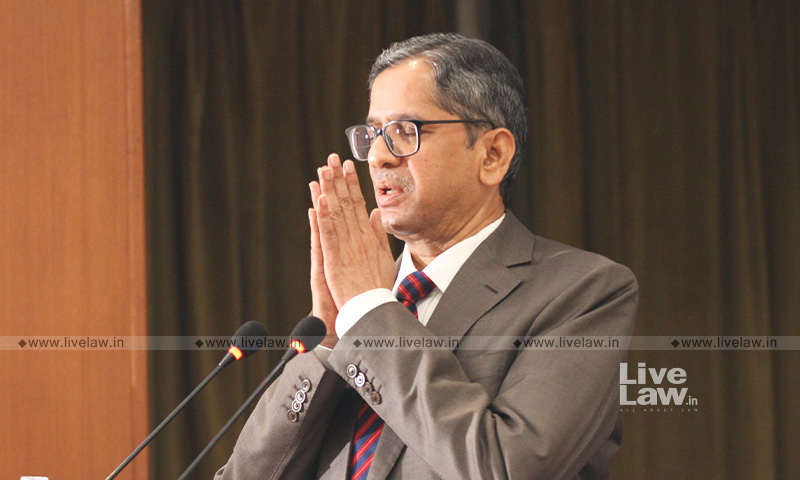 "It's a new trend started, Government has started maligning the Judges! It's unfortunate" the Chief Justice of India remarked on Friday. The remark was made while considering two special leave petitions including one filed by the State of Chattisgarh challenging the High Court's order quashing FIR registered against Aman Kumar Singh, former IRS Officer and Principal Secretary to former...

"It's a new trend started, Government has started maligning the Judges! It's unfortunate" the Chief Justice of India remarked on Friday.

The remark was made while considering two special leave petitions including one filed by the State of Chattisgarh challenging the High Court's order quashing FIR registered against Aman Kumar Singh, former IRS Officer and Principal Secretary to former Chief Minister under the Prevention of Corruption act.

Senior Advocate Siddharth Dave appearing for one petitioner submitted that the reasoning given to quash the FIR is that the allegation is based on probability. He added that a complaint was made, and the writ petition was filed on preliminary inquiry stage.

"Whatever fights you may take that's alright. But don't try to malign the courts. I'm watching in this courts also, it's a new trend", the CJI remarked

Senior Advocate Rakesh Dwivedi appearing for the State of Chattisgarh stated that they are not pressing that point at all.

"No, we are watching every day. You are a senior counsel, you've seen this more than us. It's a new trend, Government started maligning the Judges, it's unfortunate", CJI added

Senior Advocate Dave then submitted that they haven't maligned anyone in the matter.

"That trend no one can countenance for even one minute. Please see the reasoning, it's not the trend and not the vindictiveness", Mr Dave said

Mr Dave submitted that the allegation is of disproportionate assets. When an inquiry is called for the respondent will be asked to explain the assets, if he is able to do that, the inquiry will by itself be closed.

"Based on surmises and your allegations we can't allow to continue this kind of victimization", the Bench said.

"It wasn't surmises. Someone has accumulated 2500 crores, we say", Mr Dave said.

Senior Advocate Rakesh Dwivedi informed the court that the respondent had one property worth 11 lakhs when he joined service, and now he has purchased 7 properties worth 2.76 crores.

The Bench will continue to hear the matter on 18th April.

A bench comprising CJI NV Ramana, Justice Krishna Murari and Justice Hima Kohli was considering a special leave petition filed by an anti corruption activist Uchit Sharma challenging the Chattisgarh High Court's order of quashing an FIR registered under the Prevention of Corruption Act pursuant to a state inquiry conducted after a complaint was filed by the present petitioner.

The court was also considering another special leave petition filed by the State of Chattisgarh challenging the same order.

In the petition filed by Uchit sharma through Advocate MP Vinod and Advocate Pranjal Kishore, he has submitted that his complaint against Singh and his family members the private respondents had led to a preliminary enquiry by the State which revealed that the private respondents held assets that were disproportionate to their income. Subsequently, an FIR under Sections 13 (1) (b) and 13 (2) of the Prevention of Corruption Act, 1988 read with Section 120B of the Indian Penal Code was registered. The same has been quashed vide the impugned order.

The High Court has held that the FIR is based on probabilities and "on the basis of probability any person cannot be prosecuted". It also holds that the State had failed to file documents "to substantiate such statement of facts... by them". Having found this, the High Court held that no offences were made out.

The petition has further argued that the High Court has erred in conducting a "mini trial" in the quashing proceedings. The same has been disapproved of by the Supreme Court in Neeharika Infrastructure Private Limited v. State of Maharashtra.

The impugned order was passed in the private respondent's writ petition before the High Court challenging the State's sanction to conduct an inquiry under the PC Act against them. The High Court through an interim order had granted them protection from coercive action.

It has been submitted that pursuant to the interim order, the State of Chhattisgarh had also filed an application seeking vacation of the interim order directing no coercive action. It was contended by the State that taking advantage of the order, the accused had not cooperated with the investigation.