'It's An Adjournment Order, Not A Reference' : Sr Adv F S Nariman On Sabarimala Review Order 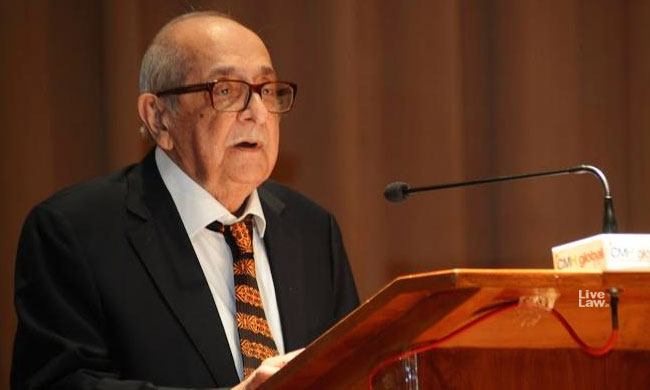 Eminent jurist and Senior Advocate Fali S Nariman on Monday questioned the propriety of the nine-judge bench considering the issues mentioned in the order passed by a 5-judge bench in the Sabarimala review case on November 14, 2019.The Senior Counsel submitted before the CJI-led bench that the scope of review was very limited - only to answer if the original decision is correct or not....

Eminent jurist and Senior Advocate Fali S Nariman on Monday questioned the propriety of the nine-judge bench considering the issues mentioned in the order passed by a 5-judge bench in the Sabarimala review case on November 14, 2019.

The Senior Counsel submitted before the CJI-led bench that the scope of review was very limited - only to answer if the original decision is correct or not. Without expressing such an opinion, a bench considering review cannot refer "abstract questions" which are not arising in the case.

"In rendering an opinion on review, there cannot be any going beyond the scope of the review. There cannot be any abstract questions which are not arising in the case itself. This has been the practice of your Lordships of the Privy Council, of the House of Lords ...Questions in the Sabarimala case were referred to a five-judge bench by a three-judge bench. And the five-judge bench answered these questions by 4:1. They said you are not a separate sect because you are worshipping a particular idol...The heading is 'Sabarimala case'! It is a review petition. It cannot be A v. B. There have to be some facts!...The scope of a decision in review is extremely limited- is the answer to a question correct or not! Is the decision correct or not! The suggestion of CJ Gogoi made an extraordinary rule. Unlike the Bombay High Court, we don't have a practice of originating summons..."

"Besides Sabarimala, we also have other cases before us...", ventured the CJ.

When the CJ observed that they have a referral order, Mr. Nariman advanced, "Actually, it is an adjournment order that the review cannot be decided right now..."

"The fact of the matter is that we have questions referred to us by a five-judge bench. What is referred to us is not the review petitions", noted the CJ. "but these questions don't arise in the Sabarimala case", insisted mr. Nariman.

"Questions some of which arose in the Sabarimala case, others in the mosque entry case, the FGM and the Parsi woman matters. Now the bench found that the answer to each case would involve Article 25 and other fundamental rights- balancing, as they call it. That is why the questions were referred to us. We don't have the review before us. The order says that the review will be decided at a later stage. We don't believe that we are deciding the Sabarimala review. We propose to only answer the questions", iterated the CJ.

"In 2017, a three-judge bench of the then CJ Dipak Misra and Justices R. Banumathi and Ashok Bhushan had referred the Sabarimala matter to a larger bench, framing 5 questions. These questions were answered by the five-judge bench headed by CJ Misra. It was this decision which was sought to be reviewed., which is governed by Order 47 (of the CPC). Its scope is very restrictive", pressed Mr. Nariman.

"Is it the contention that while hearing the review of one judgment, the court cannot refer to a larger bench some questions which also arise in other cases?", asked CJ Bobde.

"Yes! It is beyond the purview! I am not suggesting Your Lordships should not constitute a 9-judge bench. That is Your Lordships' privilege. But this will set a precedent in law", said Mr. Nariman.

"We said we are not deciding the review petition, the Agyari case (Parsi women case) etc. We are only on the interpretation of Articles. We will have the hearing in a preliminary, cursory manner", repeated the CJ.

"That is what! Speaking without deciding!...Without any facts, it is difficult", argued Mr. Nariman.

"We will frame what Mr. Nariman is arguing as a separate issue. And we will hear it along with the reference", suggested the CJ.

"But Your Lordships have to decide the preliminary issue before hearing others", intervened Senior Counsel Indira Jaising.

"We will do that. What Mr. Nariman says is correct- to decide the issues as and when they arise in each case. That is the usual practice. But what will happen is that these issues will arise again and again, resulting in a reference", reflected the CJ.

Later, the bench adjourned the case till Thursday and indicated that it will frame by issues by itself, including the preliminary issue raised by Nariman regarding maintainability of reference.