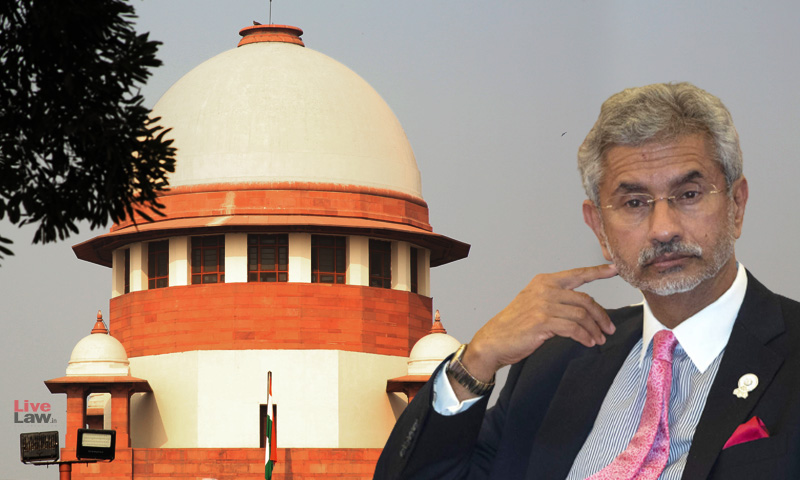 The External Affairs Minister of India, Dr. S. Jaishankar has defended his election to the Rajya Sabha last year before the Supreme Court.In his counter-affidavit, Jaishankar has stated that there exists no provision either in the Constitution or the Representation of Peoples Act prescribing election to vacant Rajya Sabha seats via single by-election.The affidavit has come on record in...

The External Affairs Minister of India, Dr. S. Jaishankar has defended his election to the Rajya Sabha last year before the Supreme Court.

In his counter-affidavit, Jaishankar has stated that there exists no provision either in the Constitution or the Representation of Peoples Act prescribing election to vacant Rajya Sabha  seats via single by-election.

The affidavit has come on record in the batch of petitions challenging the election of External Affairs Minister S Jaishankar to Rajya Sabha from Gujarat claiming that the Election Commission (EC) issued two separate notifications for holding by-polls for casual and regular vacancies in Rajya Sabha and the same was in violation of the law.

The Cabinet Minister has told the Supreme Court that there is no mandatory requirement of conducting election through single by-election.

On November 18, the Top Court had notice to the petitions, one of which have been filed by Congress Leader Gaurav Pandya.

The issue relates to the power of the decision of the election commission to hold separate polls for the two Rajya Sabha seats vacated by Union ministers Amit Shah and Smriti Irani in May 2019.

The petitioners argue that the bypolls to the 2 vacated seats ought to have been done through a 'single transferable vote' instead of separate polls to the two seats.

The elections were conducted on the same day but through separate voting and both seats were won by the candidates put up by the Bhartiya Janta Party (BJP), one of them being Jaishankar. The other elected candidate was Jugalsinh Mathurji Lokhandwala, whose election has also been challenged by other petitioners.

Defeated Congress candidates had moved the high court, challenging the election on the ground that the Election Commission's notifications, treating the two vacant seats to be of different categories and requiring by-polls to be held separately, were "illegal and in violation of provisions of the Constitution, the Representation of People (RP) Act, 1951 and the Conduct of Election Rules, 1961".

The high court had dismissed the petitions saying the petitioners failed to disclose the cause of action under the provisions of the RP Act relating to the grounds for declaring an election void.

It had also said the petitioners failed to point out any provision of the Constitution or the RP Act requiring the EC to hold a single by-election for filling up all casual vacancies.

"The non-compliance of provisions of the Constitution or provisions of the said (RP) Act constituting the cause of action has to be specifically pleaded, and the interpretation of the petitioner of a particular provision of Constitution or of the Act in a particular manner cannot be termed as the noncompliance of such provision for the purpose of challenging the election," the high court had said.

Jaishankar had contended before the high court that the EC broke no rules by holding separate elections for two seats and it has been a consistent practice by the poll panel since 2009 to issue separate notifications for holding by-polls for casual vacancies in the Rajya Sabha.

Pandya has contended that the vacancy notification was to be effectuated under section 147 of the Representation of People Act, 1951 which required calling upon elected members of the Legislative Assembly of the State of Gujarat to elect a person for filling up the vacancies.

"It is however submitted that the election commission proceeded to issue two separate notifications for the two vacancies and taking advantage of the two notifications issued by the election commission, the Gujarat Legislative Assembly purportedly held two separate elections on the same day (i.e. 5.7.2009) to fill up the vacancies caused in the Rajya Sabha"

Today, the Bench led by CJI SA Bobde adjourned the clutch of plea's for further hearing in the Third Week of January 2021.