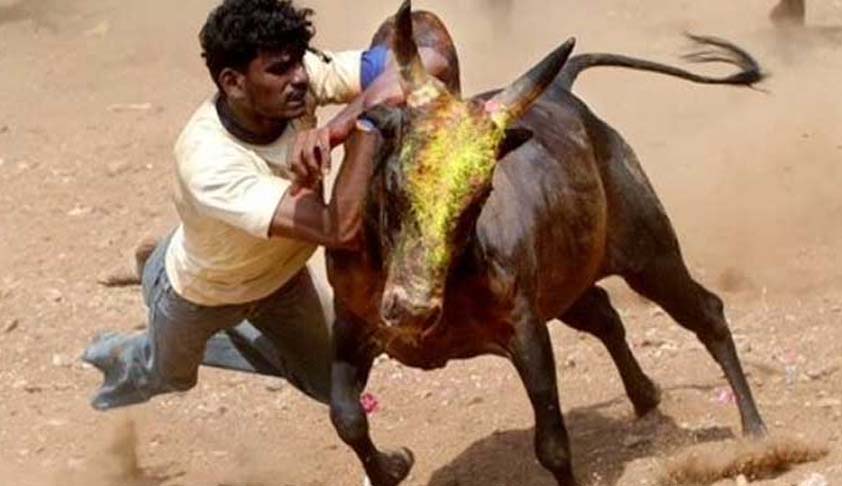 The State of Tamil Nadu has recently filed its written submission before the Supreme Court in the Jallikattu matter (The Animal Welfare Board of India and Ors. vs. Union of India and Ors.) which is being heard by a 5-judge constitution bench.

The Constitution Bench is considering the validity of the amendment made by the Tamil Nadu legislative assembly to the Prevention of Cruelty Act in order to overcome the ban on jallikattu imposed by the Supreme Court in its 2014 judgment in the case Animal Welfare Board of India vs A Nagaraja.

The State of Tamil Nadu submitted in its affidavit that, "Jallikattu is not merely an act of entertainment or amusement but an event with great historic, cultural and religious value." It was further submitted that Jallikattu is conducted during the Pongal festival as thanks giving for a good harvest and subsequent festivals are conducted in temples which shows that that the event has great cultural and spiritual significance. The State Government also pointed out that in order to ensure that Jallikattu is conducted in an organized manner and to ensure that no unnecessary pain or suffering is caused to the animals and no accidents takes place during the event, the Tamil Nadu Regulation of Jallikattu Act, 2009 has been enacted.

The State also submitted that an ordinance was passed by the State of Tamil Nadu in 2017 to amend the Prevention of Cruelty to Animals Act, 1960, which was assented by the President of India following which it came into effect. The ordinance was followed by the passing of the Bill in the State Legislative Assembly and that also was assented by the President. After the amendment of the Act the places for the events were notified in the State Gazette along with the rules and regulations for the conduct of Jallikattu.

The Tamil Nadu State Government has also submitted in its affidavit that, "While organizations like AWBI and PETA argue that abuse of animals and cruelty is inherent in Jallikattu, it is to be noted that none of the acts of cruelty mentioned are inherent to the sport of Jallikattu and can be easily prevented by providing sufficient safeguards. The basic rules of Jallikattu do not permit the bull to be tamed/restrained by using any instruments like sticks, ropes or knives and do not permit the participants to hold any other part of the bull except the hump."

Jallikattu does not violate principles of compassion

The affidavit also submitted that Jallikattu does not violate the principles of compassion and humanism nor does it violate the provision of the Prevention of Cruelty to Animals Act and has nothing to do with "speciesism" or discrimination against animals. The affidavit further pointed that the bulls involved in Jallikattu are treated with great care and no harm is ever allowed to be caused till the very end of their life. It was also specified in the affidavit that after "the dismissal of the review petition there was an uprising among the youth of Tamil Nadu who wanted to assert their right to continue with their cultural and traditional practice."

The affidavit of the Tamil Nadu State Government also responded to the questions raised by the Supreme Court. The affidavit submitted that, "the subject of Prevention of Cruelty to Animals comes in the concurrent list under Entry 17 of the List III of Article 246 of the Constitution of India for the amendment to the PCA (Tamil Nadu Amendment Act 2017) Act, 1960." It was further submitted that, "The Amendment Act provides scope for regulating the manner in which the bulls are provided adequate food, water, shelter and space at all times so as to ensure that they exhibit their normal physiological behavior right from the time they enter the place where Jallikattu event is conducted till the time they are taken away by the owners after the bull completes its "run". The Amended Act ensures that the bulls are safely taken back home by the owner after the run is completed. All the instances of alleged cruelties can be prevented with strict vigilance and by creating awareness amongst the participants."

The State also responded to the question that whether impugned Tamil Nadu Amendment Act be stated to be part of the Cultural heritage of the people of the State of Tamil Nadu so as to receive the protection of Article 29 of the Constitution of India. It was submitted that, "Jallikattu traces its origin to Indus Valley Civilization and there are Terracotta Tablets which depicts the act of Jallikattu. Reference about Jallikattu is also available in "Silapathikaram" and "Kalithogai" – both ancient Tamil literature dating back to the Sangam era and beyond. The sport of Jallikattu as practiced today is depicted in a 5000-year seal of Indus valley civilization which is still preserved in the national museum. The sport of "Yeruthazhuvuthal" dates back to the Sangam era which means embracing of the bull and not over powering of the bull. Historically, the sport was also used to choose a suitable groom for young women in the villages. The sport has been an integral part of Tamil culture and heritage for several millennia."

The State specified that an important objective of the Act is the preservation of breed for which Jallikattu is recognized as a tool. It was also submitted that, "Banning the event will discourage the farmers from rearing native cattle breeds further. The breed has become insecure at the moment from being normal. Conservation of breeds must start with encouraging those communities that are traditionally involved in rearing the breeds. Permitting Jallikattu would be one such measure and banning the event would discourage the livestock farmers. In order to protect, preserve and encourage the farmers to use the native breeds of bulls, cultural events like Jallikattu is a necessity. Ban of these bulls will lead to its extinction and thus the lives of millions of livestock keepers would be interfered with directly."

The TN Amendment does not encourage cruelty to animals

Another question raised by the Supreme Court was that whether the Amendment Act goes contrary to Articles 51A(g) and 51A(h) and is therefore unreasonable and violative of Articles 14 and 21 of the Constitution of India. Responding to the question the State submitted that, "The Impugned Act is fully in consonance with the spirit of Article 51 A(g) of the Constitution of India and does not in any manner encourage persons to be cruel to animals. The Amendment Act does not violate the principles of compassion and humanism nor does it violate the provisions of the PCA Act." It was further added that, "in the event that the petitioner came to the conclusion that Jallikattu is against the fundamental duties under Articles 51-A (g) and (h) it should have given harmonious consideration to the provisions in order to reconcile them with Article 51-A (f) as Jallikattu is very much a part of our rich culture and heritage. The provisions of Article 51(A) are not at all attracted since the humanism concept cannot be invoked to animal welfare and protection."

Whether the amendment is contrary to earlier Supreme Court judgment

Responding to the question raised by the Supreme Court whether the Amendment Act is directly contrary to the judgment in A. Nagaraja and whether the defects pointed out in the judgment could have been overcome by the Amendment Act. The State submitted that, "the Prevention of Cruelty to Animals (Tamil Nadu Amendment) Act, 2017 (Impugned Amendment Act), is not violative of any provision of the Constitution of India nor contradicts the Judgement of this Animal Welfare Board of India V. A.Nagaraja and Ors."

The State finally submitted that the Amendment Act in no way contravenes the objectives of the PCA Act of 1960 and the Government of Tamil Nadu is taking steps to ensure humane and painless Jallikattu for the bulls. It is also submitted that in the name of the prevention of cruelty the courts ought not to impose absolute bans on Jallikattu. People have a fundamental right to organize Jallikattuunder Art 21 of the Constitution and in view of Art 14 and 21 as well as the doctrine of Proportionality the limitations should be narrowly tailored to prevent any possible harm to the animal and not to impose a restriction which abolishes Jallikattu completely as that would be excessive.