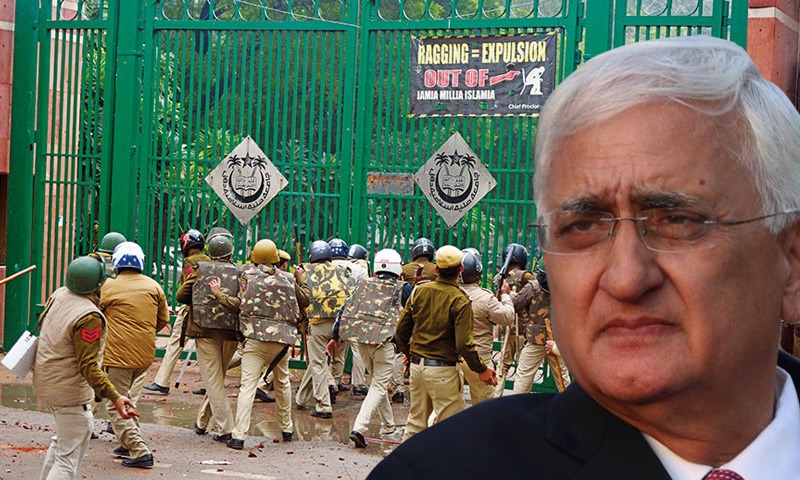 Appearing in a petition seeking an independent investigation into the alleged police brutalities against students of Jamia Milia Islamia, Salman Khurshid, Senior Advocate, submitted before the Delhi High Court that police entered the University without seeking prior permission.

He submitted that there is a protocol of police not entering the University without taking the prior permission from the VC. Even in emergency situations, police need to explain the reason for not seeking prior permission. The integrity of a University cannot be violated.

"Alleged acts of vandalism in areas in the vicinity of the campus can't be a justification for entering the University without permission", he submitted before a division bench comprising Chief Justice D N Patel and Justice Prateek Jalan.

"It's only when campus police are unable to control the situation, that the external police should be asked to enter the campus", he stressed.

He also submitted that the police action was not proportionate and sensitive. The students were merely exercising their constitutional right to protest against the Citizenship Amendment Act.

"There has to be a requirement of proportionality and greater sensitivity while dealing with University students", he argued.

He said that the police action was intended to stop the students from carrying out a march to the Parliament.

"Police can regulate such a march but here they decided to not to allow that march to parliament to take place at all", he said.

Pressing for an investigation by an independent fact-finding body, the Senior Advocate said, "A fact-finding committee to help heal the wounds that have been caused to the students. Police should not become a judge in its own cause. This will rebuild public confidence in the inquiry as well as in the criminal justice system."

The court should consider giving interim compensation to some severely injured students, he added.

Khurshid: Students have a constitutional right to protest, in light of the Ramlila Maidan judgment

Earlier, Colin Gonsalves, Senior Advocate, had made submissions in the matter. He said that the police investigation was "one-sided".

The Court will continue the hearing tomorrow.