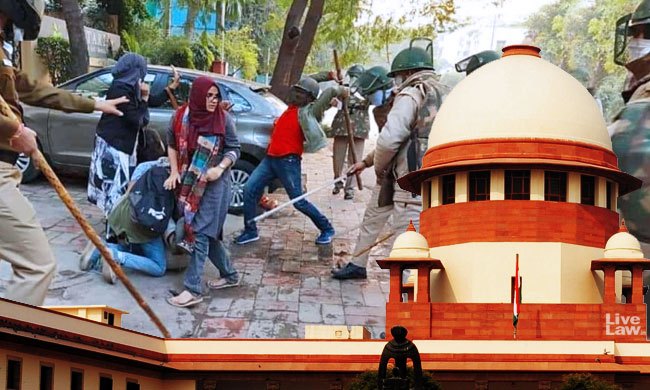 The Supreme Court on Tuesday asked the petitioners to approach the concerned High Courts with their prayers for a Court-monitored probe into the reports of police atrocities against students of Jamia Milia Islamia and Aligarh Muslim University during protests against the Citizenship Amendment Act.

The bench consisting of CJI Bobde, Justices Surya Kant and B R Gavai said that it was not feasible for the SC to monitor the probe as the incidents happened across the nation.

"Having regard to the nature of the matter and dispute, and the vast area over which the matter is spread, we do not think it is feasible to appoint one committee for this. The High Courts can be approached where the incidents have taken place",said the bench after hearing Senior Advocates Indira Jaising, Sanjay Hegde and Colin Gonsalves.

The SC said that High Courts will be at liberty to consider all issues raised by the petitioners such as the entry of police into campuses without permissions from the authorities, detention of students and denial of medical help to injured students etc.

"High Courts have the liberty to appointed retired judges for the purposes of inquiry after hearing the Union and the State Government", the bench added.

The Court observed at the beginning that it was not a fact finding court and urged the petitioners to approach the High Courts.

"We are not a trial court. We will not be establishing facts. You should be knowing this", CJI told the petitioners.

Senior Advocate Indira Jaising complained that police had attacked protesting students. "Students cannot be thrown into jails like this", Jaising said. She said that police had barged into University premises without taking the permission of the authorities.

In response, the CJI asked "What are the officers supposed to do if the students behave like this?Won't FIRs be filed if students pelt stones?"

Solicitor General Tushar Mehta submitted that not even a single student has been arrested. The SG also dismissed the petitioners' submission that medical help was denied to students as "rumors".

No person was arrested. This is absolutely false. police are here. They will give you the facts.

CJI - We will record your statement that there were no arrests. But, illegal activities cannot take place. The police had the authority to put an end to all such criminal activities.

As per the petitioners, escalation of peaceful protests against the implementation of the Citizenship (Amendment) Act, 2019, which commenced at JMI on Sunday afternoon led to the excessive use of force on behalf of the Delhi Police. The petitioners alleged that forceful entry into the university premises and the use of teargas shells as well as lathi-charge by the police were carried out.  Multiple students were detained for a few hours with no access to medical or legal aid. In response to the same, students from various universities have taken to the streets to protest against and condemn the brutal police action on unarmed students.

When the matter was mentioned by Jaising and Gonsalves before CJI Bobde on Monday for suo moto action,  he had stated that the powers of the Apex Court were limited as it was a law and order issue, and that the matter could only be heard only if the rioting subsided.