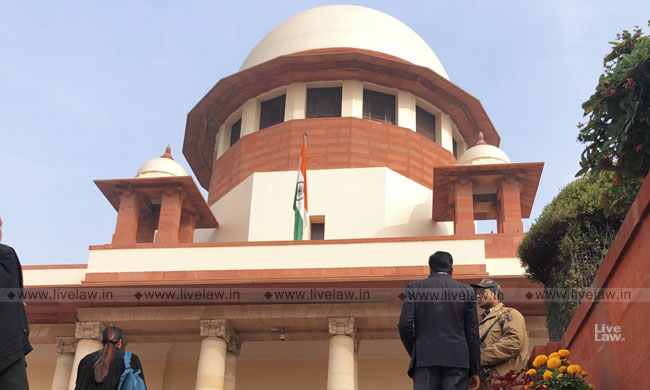 The Jamiat Ulama-i-Hind has filed an application in Supreme Court seeking to implead itself as a party in a petition which challenges the constitutional validity of Section 4 of The Places of Worship (Special Provisions) Act, 1991 (the Act). The petition in question, filed by Vishwa Bhadra Pujari Purohit Mahasangh, claims that the aforementioned provision has the effect of preventing...

The Jamiat Ulama-i-Hind has filed an application in Supreme Court seeking to implead itself as a party in a petition which challenges the constitutional validity of Section 4 of The Places of Worship (Special Provisions) Act, 1991 (the Act).

The petition in question, filed by Vishwa Bhadra Pujari Purohit Mahasangh, claims that the aforementioned provision has the effect of preventing the Hindu Community from reclaiming certain places of worship which were originally Hindu in nature but allegedly converted by Muslim invaders. The petitioners had also claimed that Section 4 of the Act discriminates between Hindus and Muslims with respect to restoring possession of places of worship.

The applicant outrightly opposes the claims made by the petitioner and urges the Court to look into the submissions made in the application itself without issuing notice in the matter. Stating that the claims of the petitioner seek to indirectly target places of worship which have a Muslim character, the Jamiat submits that in the backdrop of the outcome in the Ayodhya land dispute, issuing notice in this matter would instill fear in the Muslim community.

"This application is being filed to oppose the present Writ Petition, so that this Hon'ble Court is pleased to not issue notice in the present petition. It is submitted that even issuance of notice in the present matter will create fear in the minds of the Muslim Community with regard to their places of worship, especially in the aftermath of the Ayodhya Dispute and will destroy the secular fabric of the nation."

To buttress this argument, reliance is placed on the M Siddiq Judgment of the Top Court, which has also noted the Home Ministry's explanation regarding the law in Lok Sabha in 1991. The applicant submits that the Court "noted that [the Act] protects and secures the fundamental values of the Constitution" and further concluded that it "imposes a nonderogable obligation towards enforcing our commitment to secularism under the Indian Constitution. It was further observed that the it was legislative instrument designed to protect the secular features of the Indian polity, which is one of the basic features of the Constitution."

The Act, according to the applicant, is a representation of a Secular State's obligations which reflects India's commitment to equality amongst all religions and affirms the State's 'solemn duty' to preserve this equality as an essential constitutional value.

It is averred that the Act takes into account the history of India and seeks to ensure that in the post-independence era, wrongdoings of the past will not be repeated to oppress future generations.

"The law speaks to our history and to the future of the nation. Cognizant as we are of our history and of the need for the nation to confront it, Independence was a watershed moment to heal the wounds of the past. Historical wrongs cannot be remedied by the people taking the law in their own hands. In preserving the character of places of public worship, Parliament has mandated in no uncertain terms that history and its wrongs shall not be used as instruments to oppress the present and the future."

Arguing that even if all of the Petitioner's allegations were true, it was merely seeking a correction of historical wrongs, which, the Apex Court has held, cannot be done.