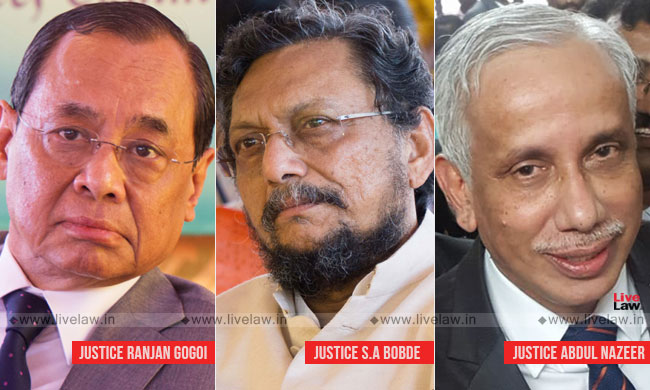 (Updated)The Supreme Court today pulled up Advocate M L Sharma for filing a shoddy petition challenging the August 5 Presidential Order on Article 370 on the very next day of its issuance.The special bench of CJI Ranjan Gogoi, Justices S A Bobde and Abdul Nazeer was considering the petitions filed by M L Sharma and Anuradha Bhasin, Executive Editor of Kashmir Times, against the Centre's...

The Supreme Court today pulled up Advocate M L Sharma for filing a shoddy petition challenging the August 5 Presidential Order on Article 370 on the very next day of its issuance.

The special bench of CJI Ranjan Gogoi, Justices S A Bobde and Abdul Nazeer was considering the petitions filed by M L Sharma and Anuradha Bhasin, Executive Editor of Kashmir Times, against the Centre's actions on Jammu and Kashmir.

"I tried to read the Petition for half an hour, I could not understand it. We should dismiss this, but we don't want to because of the effect it will have on others", CJI Gogoi told Sharma, who has earlier faced the wrath of the Court for filing vexatious PILs.

At this juncture, Kashmiri lawyer Shakir Shabir stood up to inform the Court that he has filed a petition challenging the Presidential Order.

The Court replied that all four petitions filed in respect of Kashmir are defective. When Shabir insisted that he had cured the defects on Wednesday, the bench said that it will have to verify with the registry.

"In a serious matter like this, people are filing defective petitions", remarked the CJI.

Once the defects are cured, the registrar will place the matter before CJI on administrative side for further instructions. Matter will be listed along with the other petitions, said the Court.

Next the Court took up the petition filed by Anuradha Bhasin, Executive Editor of Kashmir Times, against the media curbs imposed in Kashmir valley following the Centre's actions regarding its special status.

"If the press identities are respected and permitted to travel, it will help", submitted Advocate Vrinda Grover, who appeared for Bhasin.

The CJI said that he read from newspapers that landlines were being restored. Justice Bobde remarked that he received a landline call from the Chief Justice of J&K High Court.

Responding to this, Grover submitted that only a few landlines have been made functional.

Attorney General K K Venugopal said that there was no restriction for the publication of Srinagar edition of Kashmir Times. If Jammu edition can be published, why cannot it be published from Srinagar, asked the AG.

The Solicitor General Tushar Mehta submitted that the situation was under daily review and measures will be taken to restore normalcy at the earliest.

"Let the security agencies be trusted", submitted the Solicitor General.

The CJI observed that the Court would like to give Government a little time to review the situation and adjourned the hearing.

The petition by Bhasin stated that Kashmir Times, stated to be the largest circulated English daily in the state with daily circulation of 3.5 lakh copies, has not been published from Kashmir after August 5.

The petitioner said that the absolute and complete internet and telecommunication shutdown, severe restrictions on mobility and sweeping curtailment on information sharing in the Kashmir valley, at a time when significant political and constitutional changes are being undertaken in Delhi to the status of J&K, is fuelling anxiety, panic, alarm, insecurity and fear among the residents of the Kashmir.

From August 4, 2019 onwards, mobile phone networks, internet services, and landline phone connectivity were all discontinued and shutdown, leaving Kashmir and some districts in Jammu completely isolated and cut off from all possible modes of communication and information. The communication blockade and strict restrictions on movement of journalists resulted in a virtual blackout, and media reporting and publishing is grievously impacted, highlighted the petition.