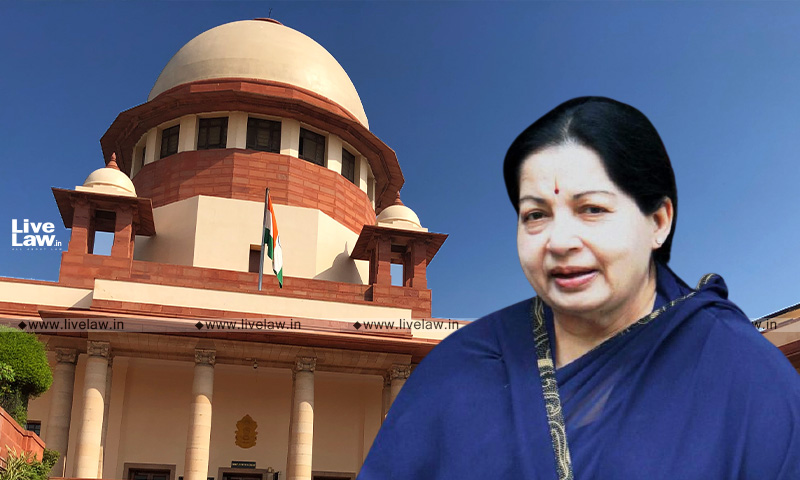 The bench of Justices S Abdul Nazeer and Krishna Murari was hearing a special leave petition filed by Apollo Hospitals against Madras High Court's order which had rejected Apollo Hospital's objections to an inquiry commission set up to probe the death of Jayalalithaa looking into aspects of treatment given to her. The petition before the Top Court was filed alleging that the functioning before the CoI was "replete with bias".
Background of the Matter
The State had appointed the inquiry commission headed by Justice Arumughaswamy, a retired Madras High Court judge, on September 25, 2017. The Commission's reference was to examine the circumstances which led to the hospitalisation of Jayalalithaa on September 22, 2016 and the nature of treatment given to determine the cause of hospitalisation.

Earlier, Senior Advocate C Aryama Sundaram appearing for Apollo Hospitals had argued that the proceedings before the Justice (retired) A. Arumughaswamy Commission of Inquiry, was in violation of the principles of natural justice and that the CoI was only a fact finding body.

On Tuesday, Senior Advocate Dushyant Dave appearing for the State of Tamil Nadu had argued that the Petitioner's arguments of bias were premature and that the scope of the inquiry undertaken is within the jurisdiction of the Commission. On that day, Senior Counsel Ranjit Kumar too had briefly made his submissions. Appearing for the Commission of Inquiry, Senior Counsel had argued that the argument of bias was being "rhetorically made without providing any perspective of the matter." He had also argued that the Petitioner's argument of incorrect recording of doctor's evidence was untrue as the 3 lines have been taken out of the entire evidence recorded by the Commission's order.

"Each and every statement that has been made to Your Lordships will have to be repelled by me", the Senior Counsel began.

The Bench posed a hypothetical question for the Senior Counsel- "Supposing this matter is examined on the Criminal side and if it is found that there is some criminality...then can nothing be done on the basis of this Report?"

Senior Counsel replied in the affirmative and elaborated that "neither oral evidence nor exhibits can be taken and drawn from here." However, he pointed out one exception exists in case of lies whereby "you can be hauled up for perjury."
Continuing this line of thought, Counsel submitted that since the Report does not have "any force" there is no ground for any apprehension on behalf of the Petitioners.

On S.5B, which the Petitioners had relied on to argue that there must be expert opinion in the form of a Medical Board, Senior Counsel submitted that the Tamil Nadu government had already by two separate notifications appointed doctors to assess the 30 volumes submitted by Apollo Hospitals. Further he added that the doctors had examined the volumes and were yet to give the Report when these proceedings have been initiated. He further added that, despite this position, if the Court still decides that if a Medical Board be appointed it may go ahead and do so.

The Bench enquired who would undertake the appointments of such a Medical Board if at all it was constituted. Senior Counsel submitted that such appointment would be done by the government with such strength as decided by the Court.

On the question of bias, Counsel relied on G.N.Nayak v Goa University 2002 2 SCC 712 and read out Justice Ruma Pal's opinion:

"If bias and partiality are defined to mean total absence of preconceptions on the mind of the judge then no one has ever had a fair trial and no one ever will. The human mind even at infancy is no blank piece of paper."

Every human being has a predisposition, he argued and added that in any case the bias-which is defined as partiality of preference- has never occurred in the present case. Senior Counsel sought to dispel the Petitioner's contention that Orders of the CoI were being leaked to the media which, allegedly, showed bias in the actions of the CoI.

Regarding the allegation that orders of the Commission were being forwarded to the media, Ranjit Kumar submitted that the context of the matter is crucial. He took the Court through the content of the Orders. He submitted that a letter was written by journalists seeking permission to observe the proceedings and also showed the response of the CoI refusing to grant such permission on the grounds that the premises of the CoI is not large enough to accommodate journalists. He pointed out that the CoI had permitted a PTI journalist to attend the proceedings and pass on the information to other journalists- and this was the content of the Orders forwarded to Media.

"If those emails were sent annexing the Orders passed on those two dates-is that sufficiently enough to raise the bias that the Commission is feeding the media?", he asked. The Bench observed that those two orders were "innocuous".
"To say that there is bias on the basis of this forwarding of Orders is not correct", he further submitted.

"The proceedings were allowed to be continued for one year...till the filing of the Petition everybody participated, everybody did everything that was required..filing of application, getting certified copies, cross-examining witnesses, etc..the High Court also notes that not a finger was raised. Having done everything now the plea of bias is being raised, in the Writ Petition" he further added.

Senior Counsel also countered the Petitioner's contention that the proceedings were in camera and the matter was being sensationalised by leaking it to the press. He circulated photographic proof in support of his claim that the proceedings were not in camera. "There is one chair for a PTI Correspondent who shares the news with everyone," he added.

Senior Counsel submitted that the Petitioners' statement that till date they had not received any material was unsubstantiated. He perused the Court through the records of the Commission to show that the Petitioner's Counsel had made an application 64 times for depositions, affidavits etc and that these requests were granted.
In response to the Bench's query that whether CoI would have any objection to cross-examine a witness who was not examined before, SA Ranjit Kumar replied that there would be no bar to the examination of witnesses again. He further showed the Bench evidence that Apollo Hospitals had cross-examined their own doctors as well. Senior Advocate Ranjit Kumar is to continue with his submissions on 25.11.2021